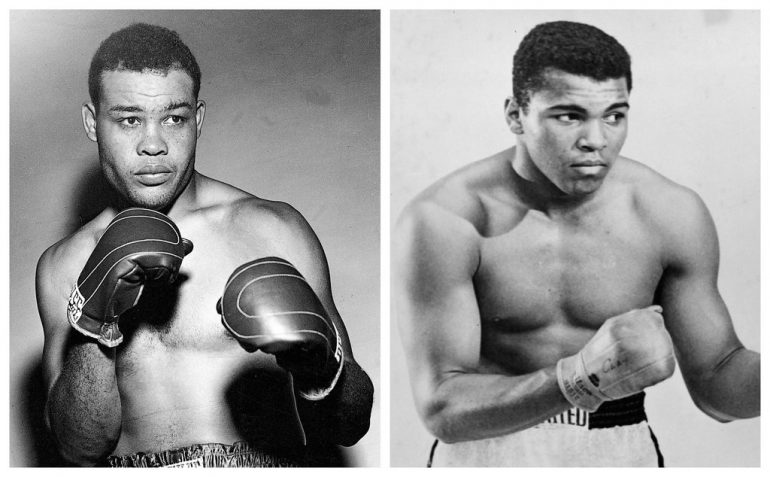 Who would you name Top 5 most influential boxers in history of the sport, I mean those who inspired most people, had biggest impact on the sport and transcended the sport itself?

Thanks for keeping up the mailbag so amazing and informative. –  Jose

Thanks for reading this column and contributing to it by sharing your thoughts and questions.

Off the top of my head, I’d say the most influential/transcendent boxers in the history of this old sport are John L. Sullivan, Jack Johnson, Joe Louis, Muhammad Ali and Sugar Ray Robinson. 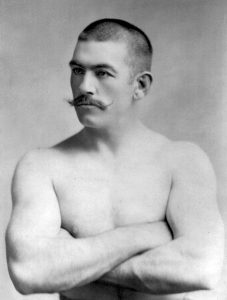 Sullivan, the heavyweight champ who bridged the bare-knuckle era to the “Queensberry Rules” gloved era, was arguably America’s first “sports hero” who took on mythic proportions, even after his retirement.

Johnson, the first African-American heavyweight champ, challenged white supremacy with his skill/prowess inside the ring and his unapologetic brash lifestyle outside of it. He wasn’t beloved by the public or even by fellow black fighters, he was more infamous than famous, but he was an important cultural vanguard who sent shook up American society.

Louis, the second African-American heavyweight champ, was popular and beloved, celebrated by black and white fans as well as a generation of boxers. He served as a symbol of strength and hope during World War II.

I don’t have to tell you about Ali do I? His impact was global. In some ways, his two-decade career was a combination of Johnson’s and Louis’ experiences/legacies. 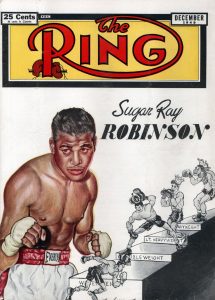 Robinson, amazingly still in peak fighting form in 1949, would influence boxers for decades to come. (Photo by: The Ring Magazine/Getty Images)

Robinson, who looked up to Louis and was influenced by the flamboyant/dapper likes of Panama Al Brown and Kid Chocolate, would take boxing stardom and entrepreneurship to new heights, inspiring a generation of boxers (especially black fighters, namely one Cassius Marcellus Clay Jr.). They didn’t just want to fight like Ray, they wanted to dress like him, dance like him, drive the same cars, own the same businesses, have an entourage like he did, etc.

BOXING’S BACK BUT SO WHAT? HERE’S SOME HYPOTHETICALS

Hey Doug,
The restart of boxing this past week has yet to spark my interest, so here I am with a few hypotheticals for ya:

Do you think it’d be a bridge too far, or how do you think Canelo would fare if he targeted Bivol next? Personally, I think that’d be a badass statement if it happened at 175. Seems like a solid 55/45 fight either way & would boil down to who could implement their style better between the inside fighter (Canelo) and the outside fighter (Bivol). I might lean Canelo given his ability to get off clean combos & often favorable judging – do you think a fight like this is realistically on his radar in say 2021?

1998 – who would you have taken between Ibeabuchi & Tyson? Would Tyson have suffered a trio of losses at that time?

Mid 90s – how would you see a fight going down between Big George vs Golota in say 95/96? That’d be the ultimate fight of cool & composed vs loose cannon. You see George taming him or would that have been a bad fight for him when he was competing in his 40s? – DJ

Foreman had too much experience and will power for Golota to deal with. The Polish contender was a strong and talented technician, and he likely would have given Big George a tough fight for six or seven rounds, but he always folded when the going got tough. As former pro heavyweight-turned-referee Randy Neumann, who reffed the Golota-Michael Grant fight, told me during my first BWAA dinner (in 2000): “Golota is that rare fighter who will snatch defeat from the jaws of victory.” Foreman by late stoppage.

And I gotta go with Ibeabuchi over Tyson in ’98. Ibeabuchi, who had an astute boxing mind in his corner with recently departed hall of famer Curtis Cokes, was at his peak that year. He was big, strong, fast, powerful and durable. Tyson was TEN years removed from his peak and he was not in a good place psychologically or spiritually. Ibeabuchi was a total head case but he wanted to fight, and he wanted to be the champ. Tyson no longer wanted to be in boxing. Ike by late stoppage. 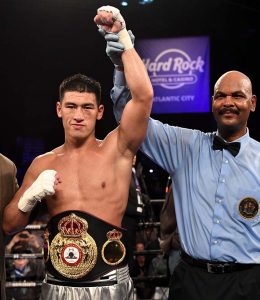 Bivol could present Canelo with a serious challenge. Photo by Matt Heasley

Do you think it’d be a bridge too far, or how do you think Canelo would fare if he targeted Bivol next? I think Canelo can hang with the top 175 pounders, and that includes Artur Beterbiev. But Bivol’s stick-and-move style would be difficult, in some ways his athletic boxing is more of a challenge for the Mexican star than Beterbiev’s brute-strong technical pressure.

Do you think a fight like this is realistically on his radar in say 2021? Yes, I do. It seems like the standouts of the 160- and 168-pound divisions are intent on pricing themselves out of shots at Canelo. I think Bivol is one of the few elite boxers in his prime who won’t ask for the contents of Fort Knox to face the three-division boss. There will be a lot of pressure for Canelo to go for the third bout vs. GGG next May, but after that event I think Bivol has as good a chance of landing a date with the freckled superstar as anyone.

Do you think a prime version of Manny Pacquiao could have become a nine-division champ against a current version of GGG?

Jorge Páez vs Orlando Salido at 126

I’ll go with Maromero over Siri by close but unanimous decision in a very entertaining fight that exhibits as much boxing skill and inside craft as it does fierce action, rough stuff and showboating; and I’ve got Ruiz by early rounds stoppage in a wild and fun Mexican heavyweight shootout.

Do you think a prime version of Manny Pacquiao could have become a nine-division champ against a current version of GGG? Absolutely not. The prime version of Pacquiao, I’m talking about his absolute peak in terms of technique and athleticism, weighed between 135-144 pounds from 2008-2009. Golovkin has slowed down considerably in recent years but he’s still a top-notch middleweight and former elite amateur with a world-class jab. He’d eventually time and clip Pac with a right that would put the Philippines hero down a hell of lot longer than Juan Manuel Marquez did in 2012.

In your June 12th mailbag you mentioned in response to mythical match-ups that a particular fighter, Jerry Quarry, would likely have been retired against George Foreman because of cuts. This got me thinking – and I have a short personal story that leads into a couple of questions.

Back in the late 50s / early 60s, my dad was a pretty handy amateur: British Army and Inter-services champion at flyweight and was in the British national squad. He had some idea he might go pro, but then in the quarter-finals of the 1961 ABA championship he came up against a little Glaswegian who, in my dad’s own words, “really taught me a lesson.” It was his only loss, but it was enough to change his mind about a career in boxing.

That Glaswegian was Walter McGowan, who won the ABA flyweight title that year, and a few years later went on to hold The Ring world title at the weight. He was generally acknowledged by observers at the time to be one of the best boxers around, but he doesn’t have the pro record his talents deserved because he kept losing fights on cuts. Several times he was well ahead in major bouts only to have the fight stopped because of his cuts.

So, my question is: who are the best boxers who never reached their full potential because of their tendency to cut easily? And are there any greats who succeeded despite this problem?

Cuts have always been a contentious issue anyway. I’ve seen fights where both boxers seem otherwise fine despite there being blood everywhere, and others where an inoccuous-looking gash has caused an early stoppage. What are your views on how cuts are dealt with by referees, and how this has changed?

Thanks for sharing some of your family history as it pertains to boxing and one of Scotland’s forgotten champions, Walter McGowan, David.

My view on cuts is simple: It’s part of boxing and I don’t think a cut should stop a fight unless the blood prevents a fighter from seeing/protecting himself or herself, or if it’s so severe that it risks some kind of mutilation or permanent damage, such as damaged nerves in the eye muscles, or the loss of an eyelid, earlobe, lip, nose, etc. 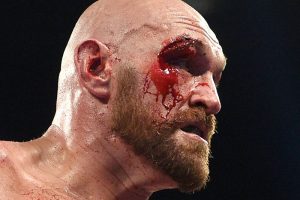 Having said that, I wouldn’t have complained had Tyson Fury’s bout vs. Otto Wallin or Badou Jack’s bout vs. Marcus Browne been stopped prior to the 12th round due to the awful cuts they sustained. Same deal with Marlen Esparza’s bout vs. Seniesa Estrada, which was stopped after Round 9.

So, my question is: who are the best boxers who never reached their full potential because of their tendency to cut easily? Good question. Off the top of my head, apart from Quarry, there’s Henry Cooper, Vito Antuofermo, Raul Marquez, Jorge Linares and Micky Ward. I’m sure there are other cut-prone boxers who lost certain fights that they could have or should have won had they not suffered cuts and facial lacerations. I’m curious to see whose names come up in the comment section banter.

And are there any greats who succeeded despite this problem? Well, Rocky Marciano and Arturo Gatti were almost as famous for their 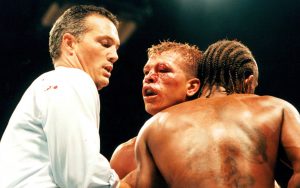 It wasn’t a Gatti fight if he wasn’t bleeding.

bleeding as they were for their big punches and all-action style, and both are enshrined in the International Boxing Hall of Fame. I don’t consider either to be an ATG, but both were beloved over-achievers who often stepped up their intensity when hampered by gruesome cuts. Manny Pacquiao, who I do consider an ATG, has had his troubles with cuts (I recall him losing his cool against the late Agapito Sanchez utilized his usual roughhouse tactics to bust up the face of the still-raw 122-pound version of the Filipino talent in San Francisco in 2001). A cut suffered during the rematch with Juan Manuel Marquez seven years later took him out of his game for a few rounds, if memory serves me, but he got back on track in time to legitimately edge that hotly contested 130-pound title bout IMO.

Email Fischer at [email protected]. Follow him on Twitter and IG at @dougiefischer, and join him, Tom Loeffler, Coach Schwartz and friends on Periscope every Sunday from UCLA’s Drake Stadium track.