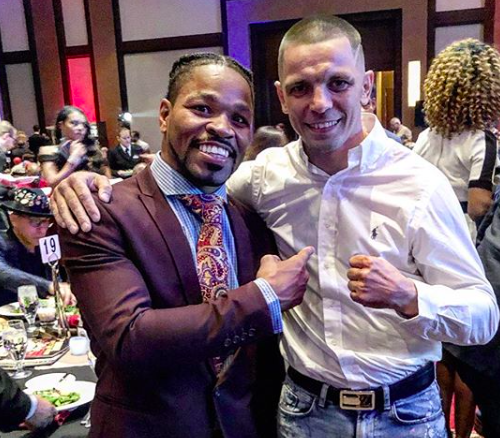 Dance fever is starting soon, and people have to start partnering up.

Here’s one that just might make a sense to do. Both in the PBC league, , each man coming off a loss.

The 23-5-1 Redkach brainstormed this one, so I asked him to pitch me, tell me why it works.

“I made a good fight with Garcia, I won the first 4 rounds and the last 3 rounds, they gave him a victory because he has a big name and that’s it,” the Ukrainine native said. In fact, the scores at Barclays Center were wider for Danny than Ivan’s math suggests. Oh, also, the fight will be be remembered as a ‘bite fight,’ with Ivan being accused of chomping Garcia’s shoulder.

“Porter’s style is only to jump in and use inside dirty football player work! My preparation defeats him, I’m a fresh 147, Porter lost a lot of weight, he will be weak,” said Redkach, trained full time by Shane’s pop Jack Mosley.

“My ex coach Shane Molsey gave me a lot of weapons, I’m sure of my victory, it will be easy!
Today, Shane sent me text at 5:30 am:

Thank you warrior you are doing great with my father I know you can become champion with my father most important thing you have to remember is movement all the time is key that mean the movement of your head when you moving forward as well as backwards. I know for a fact you will be in shape. Getting closer to any fight make sure to rest the back at least one week from any fight and you will be an animal promise. You have made a wise choice my man. Best of luck on your career. Peace and blessings to you and your family.

Looks like it got out of discussing availability and suitability with styles and weights and such: “Today my advisor called me,” Redkach said. Porter, too, is signed to Unseen Al, for the record. Redkach said he’s under the impression Redkach vs Porter now in the look for site-look for date territory.

“As of now it is under the negotiation,” Redkach continued. “Basically we negotiate the date and price. We have the same advisor and he wants to have this fight.”

It’s past my bedtime, I pit this up at 4:30 AM ET, let’s throw it over to Team Porter, see where all this stands.