Clay Collard does it again, upsetting another undefeated prospect 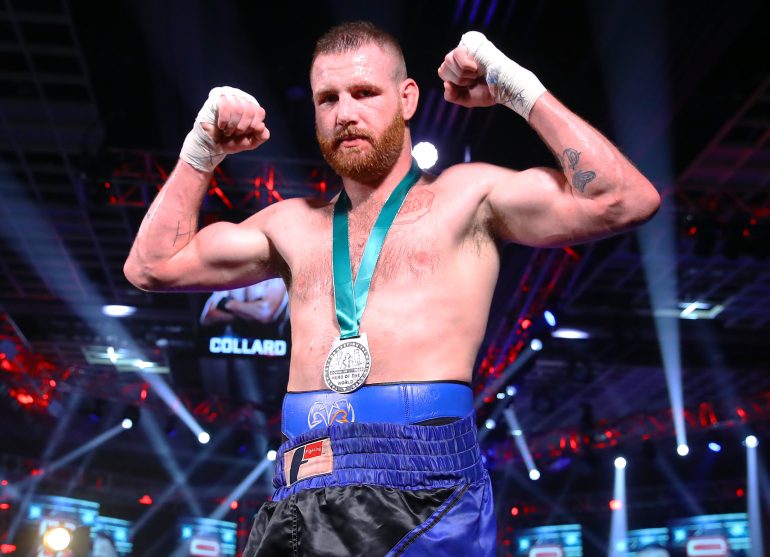 Clay Collard did again, pulling off an upset against David Kaminsky (Photo By Mikey Williams/Top Rank)
18
Jun
by Joseph Santoliquito

Once, you might shrug your shoulders and say to yourself that it happens. Twice, and you begin thinking this is a habit—a habit that any undefeated prospect will be avoiding in the near future.

Thursday, “Cassius” was in with another 19-year-old undefeated prospect, middleweight southpaw David Kaminsky.

At 27, Collard was an old dog in comparison to the teenaged Kaminsky, and he did it again.

He won a six-round, split-decision victory on ESPN from the MGM Grand Conference Center in Las Vegas.

“I honestly thought he would hit harder,” said Collard, whose opponents were a combined 59-3, with nine undefeated fighters, entering the Kaminsky fight. “But once I felt his power, I pressed the action. The key to victory was to keep pushing, the will to win, keep after him.

“I didn’t know if the cut came from a punch or a headbutt at first, but I knew being aggressive would be the key to victory. I was nervous when the cards were being read, but I felt I’d done more than enough to earn the decision.”

There was some trepidation when the scorecards were read. Judge Patricia Morse Jarman somehow saw it 58-56 for Kaminsky. Thankfully, judges Lisa Giampa and Dave Moretti had it right, each scoring it 58-56 in favor for Collard.

Kaminsky, who lives in Los Angeles, by way of Natanya, Israel, suffered a cut in the corner of his left eye in the first round.

The opening round set the template for the fight.

Collard, his nose bloodied in the second, kept pressing Kaminsky, who couldn’t seem to keep Collard off of him. 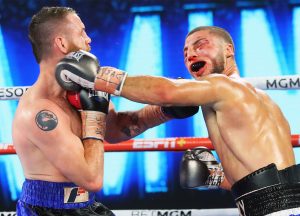 Through two rounds, Cassius landed 49 punches to Kaminsky’s 29—and it began showing on the young southpaw’s face, which began breaking up. Collard used a variety of punches to make his point tagging with rights, left uppercuts and damaging body shots.

Kaminsky thought he would slow down Collard with a body attack. Though by the fourth round, Collard showed no signs of slowing down.

“I pushed through it.”

In the fifth, Collard was all over Kaminsky. He tried mixing his punches, but he posed too much, standing right in front of Collard to be hit. Through five, Collard’s face was hardly marked up, while Kaminsky’s face was a swollen, reddish mess.

Collard took some punishment in the sixth, but afterward, based on the appearance of both fighters, it was very evident who won the fight.