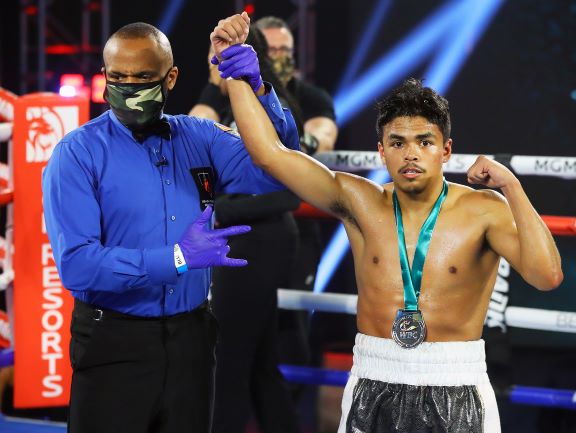 By day, Adrian “Sharkey” Servin works in the water department in Goodyear, Texas. By night, he fights. No one would certainly question his audacity. He had the chance to fight on national TV two weight classes up from where he’s spent much of his career—on six days’ notice.

Servin wound up getting served up by Robert Rodriguez (8-0-1, 3 knockouts) in what was a scheduled six-round bantamweight weight fight on Thursday night on ESPN from the Grand Ballroom at the MGM Grand Conference Center, in Las Vegas. 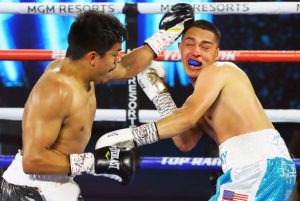 Rodriguez, from San Antonio, Texas, stopped at 2:48 of the second with a body shot. Referee Robert Hoyle waved it over, and Servin (9-1-1, 3 KOs) didn’t vehemently argue the decision.

Servin started the fight well. Rodriguez, a southpaw, was larger than the late-substitute. It didn’t stop Servin from backing him up.

In the second, Rodriguez, 20, began commanding the center of the ring. With 2:26 left in the round, Rodriguez popped a straight left off of Servin’s face. With just under two minutes left in the second, a left to the body followed by a textbook right hook to the jaw dropped Servin, 23, in the corner. Hoyle gave him an eight-count, and Servin appeared be to okay.

The knockdown seemed to embolden Rodriguez. He pressed Servin. In the last minute of the second, he nailed Servin with a couple more lefts to the head against the ropes, when Hoyle felt it prudent to step in and wave it over.