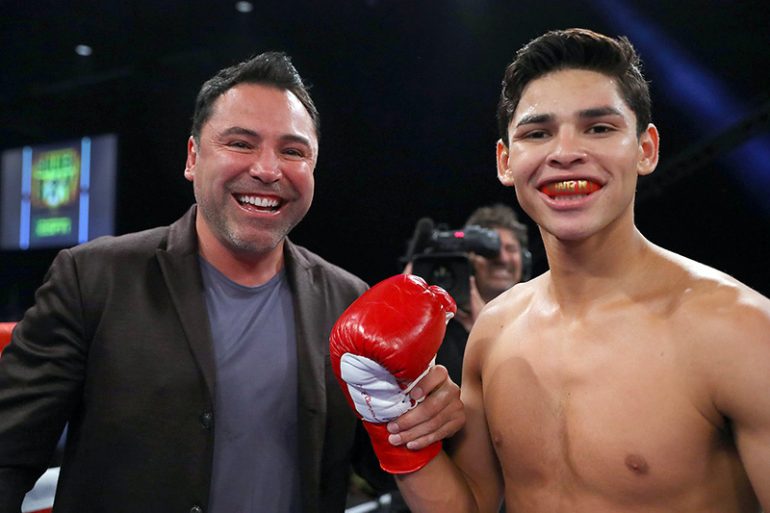 The relationship between Golden Boy Promotions and Ryan Garcia looks like it is strained once again.

Oscar De La Hoya, the Chairman and CEO of Golden Boy, announced Monday afternoon the undefeated lightweight will no longer headline the upcoming fight card the promotional company will stage next month.

That card, which will likely take place at the Fantasy Springs Resort Casino in Indio, California or Las Vegas, was scheduled to take place on Fourth of July weekend. It will be Golden Boy’s first card in over four months due to the COVID-19 pandemic.

“Due to Team @KingRyanG decision now to accept a July 4th bout, we will now return in late July with the future in boxing @vergilortiz,” was what De La Hoya posted to Twitter.

Due to Team @KingRyanG decision not to accept a July 4th bout, we will now return in late July with the future of boxing ? @vergilortiz , more exciting details to follow @GoldenBoyBoxing

“You do realize you’re supposed to be my promoter not hater?”

Garcia has since deleted the response.

Monday’s exchange on social media is the latest spat between De La Hoya and Garcia. A fallout occurred between both sides after Garcia declined to fight hard-hitting Romero Duno of the Philippines on September 13 at Dignity Health Sports Park in Carson, California after original opponent Avery Sparrow was arrested at the weigh-in. Golden Boy offered Garcia a fight against Duno, who was scheduled to fight on the same card.

Both sides used social media to attack one another until a meeting was scheduled later that month at Golden Boy’s offices in Downtown Los Angeles, where a five-bout contract was reached between both sides. It was described as the most lucrative contract ever offered by Golden Boy to an unbeaten prospect.

Garcia has fought twice since, knocking Duno out in the opening round on November 4 on the undercard of the Canelo Alvarez-Sergey Kovalev fight in Las Vegas. In his last bout on February 14, Garcia (20-0, 17 knockouts), who resides in Victorville, California, scored a highlight-reel first round knockout over Nicaragua’s Francisco Fonseca in Anaheim, California before a crowd of over 10,000 at the Honda Center.

Golden Boy Promotions reportedly offered Garcia $200,000 to fight on the Fourth of July weekend card, but Garcia balked at the amount offered. In an interview last week with SI’s Chris Mannix, Garcia voiced his displeasure.

“That’s bulls–t! Why am I being held back financially? What is the problem here? Why is DAZN giving out big numbers to guys fighting nobodies? It’s f–ked up how I’m being treated. I’m not asking for $100 million. Just give me the check I deserve. How am I one of the biggest fighters in the world and I get bigger paychecks outside of boxing?”

Lupe Valencia, who advises Garcia, stated Monday that the offer from Golden Boy was not satisfactory. Another factor was DAZN, which has a deal to stream Golden Boy cards.

“It’s complicated,” Valencia told ESPN’s Steve Kim. “Things are not irreparable now. We’re going to get through this, but for this particular fight, Golden Boy asked DAZN to do a fight with a limited budget because of this whole COVID thing. My understanding was DAZN was planning to come back in September. Golden Boy wanted them to come back earlier and headline Ryan. My understanding is DAZN agreed to come back earlier with a limited budget.”

“Our opinion was that we weren’t willing to come back earlier on the limited budget. That’s really the gist of it.”

Garcia was being lined up to face former world lightweight titleholder Jorge Linares, but a Golden Boy source says they would like to put that fight on the undercard of a Canelo Alvarez fight, which could take place in September. Linares also fought on the February 14 card, knocking out Carlos Morales.

Ortiz (15-0, 15 KOs), who is trained by Robert Garcia, was scheduled to fight Samuel Vargas on March 28 at The Forum in Inglewood, California before the card was canceled due to the COVID-19 pandemic.