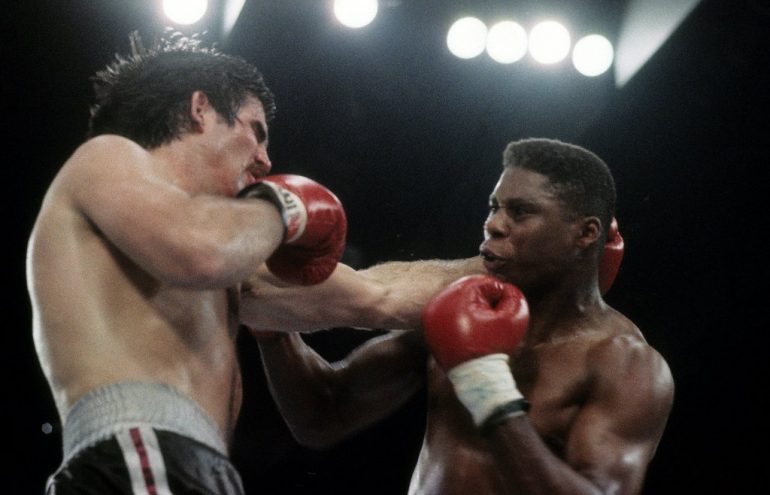 Former amateur star Tyrell Biggs never lived up to his vast potential as a professional, partly due to his party-going nature and transgressions with drugs and alcohol. However, he regularly fought some of the best heavyweights of his generation.

Biggs was born in Philadelphia on December 22, 1960. He was the youngest of five children and had positive influence from his father, who was a male nurse, and his mother, who worked as a schoolteacher.

He was raised in West Philadelphia and found boxing at 12 years old.

“It was tough around here but not as bad as other places,” Biggs told The Ring. “I liked other sports, like basketball and football, but I was always a boxing fan, even when I was playing ball. I had a heavy bag and speed bag in my basement. I used to watch the fights all the time.

“I remember my dad used to take me over to Joe Frazier’s gym. I was in awe watching those guys workout and box. I was always intrigued by watching Joe Frazier train.”

Biggs boxed as an amateur but excelled at basketball and was on the West Philadelphia team when they won a high school championship. He later graduated and attended Hampton University, where he studied Physical Education. However, by this time, boxing was his main focus.

Although Biggs was a hugely successful amateur in the early 1980s, he readily admits he enjoyed partying.

“I drank and did drugs,” he openly admitted. “I was doing that prior to my pro career.”

“He’s a big guy and when you’re big and have skills, that makes it tough to do anything,” said Biggs of his amateur nemesis. “He had a long reach and you had to be real cautious about the way you attacked him.

“The first time I fought him he broke my ribs, the pain was just too much, and that’s how that fight ended. When I fought him the second time, I thought I won that fight, but he got the decision.”

Biggs went on to win gold at the World Championships in Munich, Germany in 1982, and beat a young Lennox Lewis en route to capturing Olympic gold in Los Angeles in 1984.

“I was excited to be boxing, winning and doing well,” he said. “Winning the World Championships meant a lot to me, and it was pretty surreal [fighting at the Olympics]. I was so thankful that I was able to come through and win, that was pretty much the highlight of my career.”

After reaching the pinnacle of amateur boxing, Biggs (108-6) decided to make the transition to the professional ranks. He made his debut in November 1984 on the biggest stage.

“It was the ‘Night of Gold’,” said Biggs, who shared the card with fellow Olympians Evander Holyfield, Virgil Hill, Mark Breland, Meldrick Taylor and Pernell Whitaker at Madison Square Garden “We all made our debuts, that was pretty intense.”

Those wins helped set up a grudge match with undisputed heavyweight champion Mike Tyson in October 1987.

“No doubt [Tyson had improved],” said Biggs, who lost by TKO in seven. “In the amateurs you’re still green and I was better than him at that time. Once he turned pro, he stayed at it, improved on the things he needed to improve on and became the better fighter. 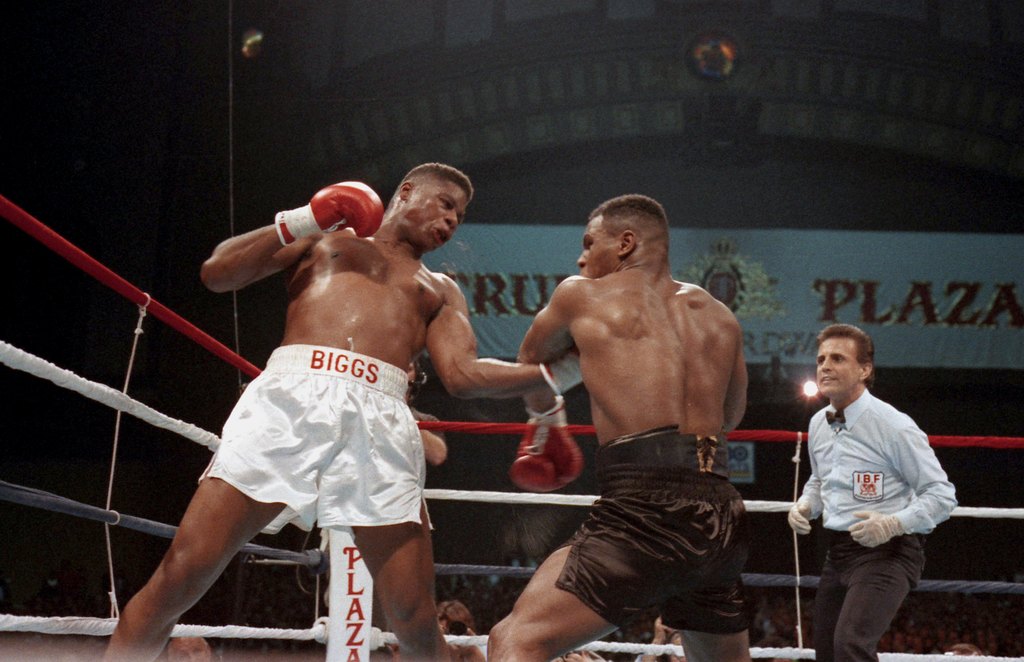 Biggs (left) against Mike Tyson. Photo from The Ring archive

Biggs lost back-to-back fights to former amateur rival Francesco Damiani and British contender Gary Mason in Europe over the next couple of years. “I just didn’t perform the way I should have.” he said simply.

The gutsy technician got back to winning ways, notably outboxing former cruiserweight titleholder Ossie Ocasio and taking Rodolfo Marin’s unbeaten record. However, he was stopped by rising stars Riddick Bowe and Lennox Lewis, in eight rounds and three rounds respectively.

Looking back, Biggs acknowledges that the hard-living early in his career likely stunted his development.

“Winning the world title would have been the ultimate in my career, but because I couldn’t win a world title I feel as though I didn’t complete my journey,” he said with a touch of sadness.

Biggs, now 59, lives in Philadelphia and has one child. He stays busy, using his experience to teach the children at the Haddington Recreation Center how to box. He has been clean and sober since 1985.

The former world titleholder graciously took time to speak to The Ring about the best he faced in 10 key categories.

BEST JAB
Lennox Lewis: He was tall and had a long reach. When you’re tall you can use that reach to your advantage. He had a good jab.

BEST HANDSPEED
Mike Tyson: He would swing those hooks and you wouldn’t see them coming. He was very quick.

SMARTEST
Tony Tubbs: He was one of the most scientific boxers that I ever fought. He was a smart fighter.

STRONGEST
Jeff Sims: I fought him early in my career, after about seven or eight fights. He was stronger than Tyson, Bowe and Lewis.

BEST CHIN
Marion Wilson: I hit that guy with a good hook and right hand he took it and didn’t flinch. Nobody knocked him out.

BEST PUNCHER
Sims: He was a big puncher and I never felt punches harder. Everywhere he would land it would kind of bother me. He hit me on my collarbone and broke it. If he caught me right, he’d probably have stopped me. I would say Tyson hit harder out of him, Lewis and Bowe. Stevenson was the biggest puncher I faced in my amateur career

BEST BOXING SKILLS
Lewis: Being tall he was able to be elusive and slip and slide. He was technically very good. Tillis was a really good boxer.

BEST OVERALL
Tyson: I’d have to go with Tyson. Tyson was in a different mindset in the 80s. No question, Stevenson was one of the best I faced in my amateur and professional career. I wouldn’t have been surprised if he’d won the title. He would have matched up well with Tyson, Lewis and Bowe. He was in that conversation. Tyson and Stevenson were great fighters.