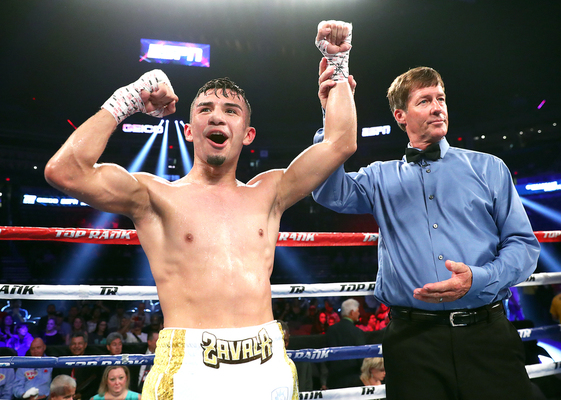 Zavala (6-0, 3 knockouts), who resides in the Los Angeles suburb of Bellflower, was scheduled to fight Fort Worth’s Edward Vazquez (7-0, 1 KO) in a clash of unbeaten fighters this coming Tuesday at the MGM Grand Conference Center in Las Vegas, Nevada. An opponent was not secured in time for Vazquez, who made an announcement Thursday on his social media accounts his fight against Zavala was canceled.

The Zavala announcement comes less than a week after unbeaten Mikaela Mayer tested positive for COVID-19. She was scheduled to fight Nigeria’s Helen Joseph this past Tuesday in Las Vegas in a 10-round bout on ESPN, but the fight was canceled. The announcement of Mayer’s positive test came after Mayer arrived to Las Vegas. Mayer has stated she is asymptomatic and is in quarantine at her Colorado home.

Much has been publicized about the steps Top Rank has taken to ensure safety for participants at all fight cards this month in Las Vegas. In accordance with the Nevada State Athletic Commission and the Centers for Disease Control, Top Rank has mandated strict guidelines.

Every fighter and trainer will be tested for COVID-19 upon arrival to Las Vegas and again after the weigh-in. Masks and hand sanitizer will be provided and mandated at the training facilities inside the MGM Grand, including the floors of the hotel where the fighters stay in. Doctors, nurses, and EMT’s would be available for consultation if needed and will determine the process if someone becomes symptomatic while on site.

Zavala, who is trained by Manny Robles, likely contracted the coronavirus during a recent sparring session.

“All three of the kids that were sparring one another, we have quarantined them,” Robles told ESPN’s Steve Kim. “Chris was the last one to test positive. Whoever tested positive, just like Chris, they can’t come to the gym. They have to be quarantined for two weeks and get tested again before they can come back.”

Robles stated he was tested for COVID-19 and the result of the test came back negative. His gym, Knockouts Boxing, was sprayed and disinfected by a professional cleaning crew.

In the main event of Tuesday’s card, which will air live on ESPN, bantamweight and Ring Magazine’s No. 7-ranked contender Joshua Greer (22-1-1, 12 KOs) will square off against Mike Plania (23-1, 12 KOs) of the Philippines in a 10-round bout. In the co-feature, undefeated junior welterweight Giovani Santillan (25-0, 15 KOs) will face former world titleholder Antonio DeMarco (33-8-1, 24 KOs) in a 10-round bout.