TEOFIMO LOPEZ’S GREATEST HITS: “This is just the beginning” 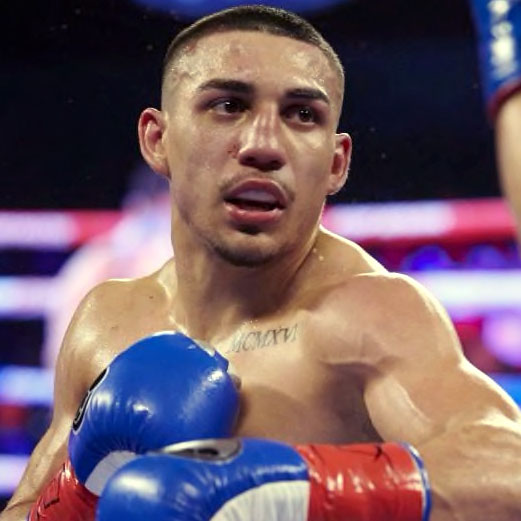 There may not be a more photogenic, charismatic fighter today than Teofimo Lopez.

The IBF lightweight titlist knows where to find the cameras; talks the big talk—then backs it up, and after he’s through with his opponents, he puts on another show with his signature post-fight backflip and home run swing.

But his magnetic enthusiasm and star power hasn’t been altered. His future looks pointed at a showdown with superstar Vasiliy Lomachenko (14-1, 10 knockouts) in a magafight either sometime this fall, when the COVID-19 pandemic hopefully flatlines, or sometime in early 2021 when a vaccine is discovered.

“The Lomachenko fight is something I’m talking about with (Top Rank CEO) Bob (Arum),” Lopez said. “We’re trying to make that fight for the fans, and it will happen before a big crowd, not in an empty arena.

“The fans deserve a fight like that. Honestly, we would have fought in May in New York. The only thing now is staying positive. We’re talking about September or October. This fight needs a crowd. It can’t happen without a live crowd. That’s a type of fight that has to be for the fans—and Bob knows that and he agrees. That fight has to have fans.

“Now, if it doesn’t, maybe there is a compromise. Everything is tough to predict, because everything has happened in waves. For now, I’m staying in shape and I’m officially out here in Jonesboro.

And though he’s had only 15 pro fights, he did take the time to break down his six greatest so far in his career.

You get the sense that there are plenty more ahead.

“This was important to me, because it was my first pro fight and it happened on the Manny Pacquiao-Jesse Vargas undercard. It was my pro debut and I include this because I was also fighting an injury. I sprained the ACL in my left knee. I didn’t know I sprained it. I did it during my last day sparring, like a week before the fight. It’s you’ll see a black wrap around my left knee. I know I got knocked down in the first round. Well, they called it a knockdown. It wasn’t. I tried to jab at him, and he pushed me down with his forearm. He caught me off balance. It’s OK. I came back and I finished him with a body shot. I dropped him three times.”

“This fight was great in the way I pretty much set him for the big punch. If you look at the fight, he threw a jab, right hand, left hook, and I sat on my back foot. He pushed me to the ropes, and I finished him with a left hook. That’s what caught everybody’s eyes. That fight showed that I really have the goods.”

“I include this fight as one of my greatest, because I broke my right hand in the first round, after dropping him. This was a step up for me, so it was really good. Going into the fight, I was dealing with issues. My dog had passed away on the Sunday of fight week. I had to go to New Orleans, knowing that my dog had passed away. It was on my mind. It’s the first dog that was mine. He was an English bulldog named Leo. He died of heat stroke. That was tough for me. I have three beautiful dogs now.

“It was a great fight overall. Mason Menard is no pushover. It was fighting on Heisman Trophy night on ESPN, and I had LeBron James like the video of the knockout. I went into the fight healthy. I didn’t get hurt during the fight.

“This fight helped me build more confidence coming off the broken hand against Silva. I had a great time. My training camp was great.”

“I was having personal issues with Magdaleno. Not now. I did then. This was in Dallas, where the Cowboys train. A lot of people were hyped for the fight. I was facing someone who was tough. It’s one of my greatest, because I had to readjust and stay composed. I took my time with him. The two back-to-back hooks that laid him out, I mean, there is no better way to finish a fight like that.

“Going in, I just thought Diego disrespected my family’s home country. He took it to a whole other level. He disrespected people that I love. He threw shade at me, which I didn’t appreciate. Everyone in boxing throws shade. The moment a fighter talks on your family and people that you’re close to, to me, that crosses the line. Anything involving parents and wives, that’s crossing the line to me. He wished me the best afterward, and I got over the hate. I knocked his ass out. There was nothing else he could do.

“It’s also important that I stayed healthy going in and after the fight.”

“Everyone knows this is my greatest victory and it was back at the Garden, where I had so many of my fights. I was going through a lot of things during and after the (Masayoshi) Nakatani fight (in July 2019 at the MGM National Harbor, in Oxon Hill, Maryland). I overcame them. I still beat Nakatani. I didn’t win by knockout, but I still showed everybody that I could do 12 rounds.

“My main objective with Commey was to beat the champion—and beat him the best you can, and that’s by knockout. My thing in camp was that I kept reminding myself when I was in the gym, ‘Put another extra round in, put another round in. It’s about you. This is the moment that you’ve been training your whole life for—and now is the time to get it.’ That was the best thing for me. I know some people thought that he would knock me out. Other people thought that I would because oy my last performance. But I knew within myself that I wasn’t going to lose.

“Only I could beat myself. I made sure that it went the way it did. I made sure I won. Our main thing in camp was break Commey down with the body shots. Commey has a little height to him, and someone who is a power puncher like he is, the only way to break him down is to work from the body and them up. We slowly started that, and I hit with a check-hook to see how he would react to it, and I saw he took a step back.

“That’s when I noticed that I dazed him a little bit. Little by little, I wanted to see if he could take a punch. Once I see someone can’t, that’s when I start walking them down. I remember dipping down, squatting a little bit, and everyone saw the shot. It’s just that mine connected before his. It was an overhand right.

“Commey was off his legs. I kept going after him when I knocked him down. I took steps back and kept throwing. I learned from the Nakatani fight that I had to stay in my zone. I was so worried about all of these other things outside of the ring, and that was my problem. I let it get the best of me. I’m in a good place now. Everyone around me, my family, my friends, everyone is good.

“It was my greatest victory. It’s a moment that I’ll remember forever.”