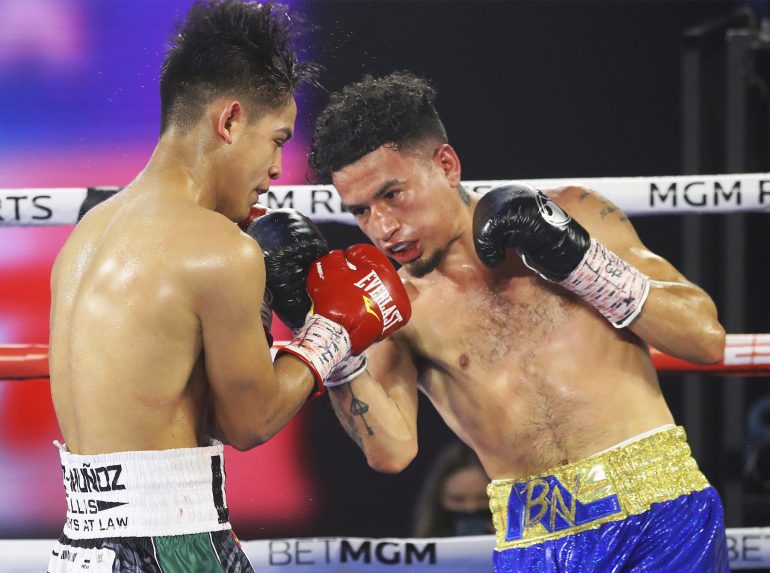 Lopez, who resides in the Los Angeles suburb of Glendale, was scheduled to fight Coria on November 30, but accepted a fight on a day’s notice against former WBO featherweight titleholder and current junior lightweight contender Oscar Valdez after opponent Andres Gutierrez weighed 11 pounds above the contract weight. Lopez dropped Valdez in round 2, but was stopped later in the fight.

The fight matched two Southern California featherweights in a crossroads bout that produced fireworks from the opening bell. Both fighters chose to stand in the pocket and throw combinations to the head and body. Coria looked to counter with hooks to the head, while Lopez focused his attack to the body. A few punches by Lopez strayed below Coria’s belt-line, drawing warnings from referee Kenny Bayless.

Lopez began to utilize his ring generalship by effectively boxing from the outside in round 3. Cori continued to close the distance between the two fighters, but would leave himself to be countered by Lopez. 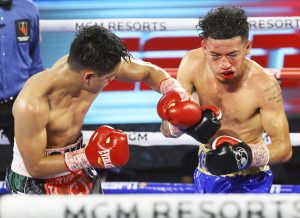 The pace of the fight slowed entering the middle rounds, which favored Lopez as he began to find a rhythm, snapping an effective jab to the face of Coria as the pace of the fight slowed. Lopez mixed his attack by throwing one or two jabs from a conventional stance, alternating back and forth at times to a southpaw stance to and lead left hands to Coria’s head and body.

“He was relentless,” said Lopez after the fight. “I hurt my hand hitting him that many times with my jab.”

By round 6, Lopez was landing the more-effective punches, particularly counter combinations to the head. The lack of head movement by Coria made it easier for Lopez to land jabs repeatedly followed by straight right hands.

Lopez began to slow down in round 8, fighting more in spurts as Coria increased his punch output. The amount of punches Coria landed caused massive swelling around Lopez’s eyes, practically shutting them during the final two rounds of the fight.

Sensing he was down during the final round, Coria closed the distance between the two, throwing hooks and crosses as Lopez was content to keep his distance and box from the outside.

Lopez stated to The Ring earlier this week that he would like to face the likes of Jessie Magdaleno, Isaac Dogboe, or Michael Conlan later this year or in 2021. Now that he has a promotional deal with Top Rank, he just wants to fight the best in the division.

“Listen, I want to fight anyone Top Rank puts in front of me. This was a great, close fight, and I have the utmost respect for Louie Coria.”

Coria, who resides in Moreno Valley, California and is trained by Robert Garcia, drops to 12-3 (7 KOs).