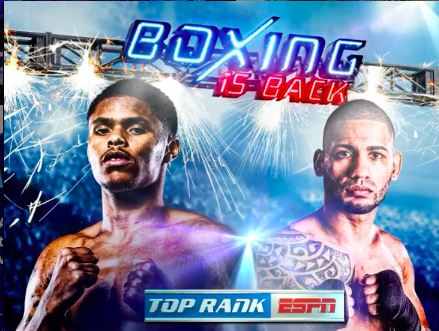 You must understand, in this day and age, interviewing an executive at a mega corporation is really a much different animal than it was 20 or even ten years ago.

Media these days thrives on negativity, because, frankly, sensationalism, and gotchas and beefs get clicks. This is no secret–the phrase “if it bleeds it leads” is pretty much mainstream by now, and most people reading this know that media has been in the cross hairs of the man elected President in November 2016.

So, a reporter probably shouldn’t go into a phone chat session with the guy who oversees combat sports at ESPN, Matt Kenny, and expect to be scribbling scoops and dish and breaking bombshells. 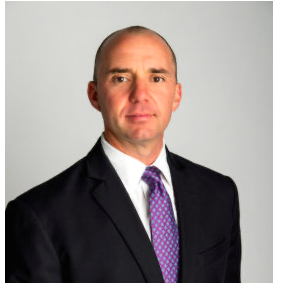 “We’ve seen that boxing performs very well in the digital environment,” said Kenny, who has been at this post for 1 1/2 years for the Bristol behemoth.

Especially not in the climate we are in, business-wise, economy-wise, and with national race relations following the George Floyd caught on tape brutalization resonating with brute force in tens of millions of minds.

And those outside-of-sports dynamics but of course make live events, like the Tuesday evening Top Rank boxing card from the MGM in Vegas, and tonight’s slate, at the same venue, that much more welcome to fight fans. 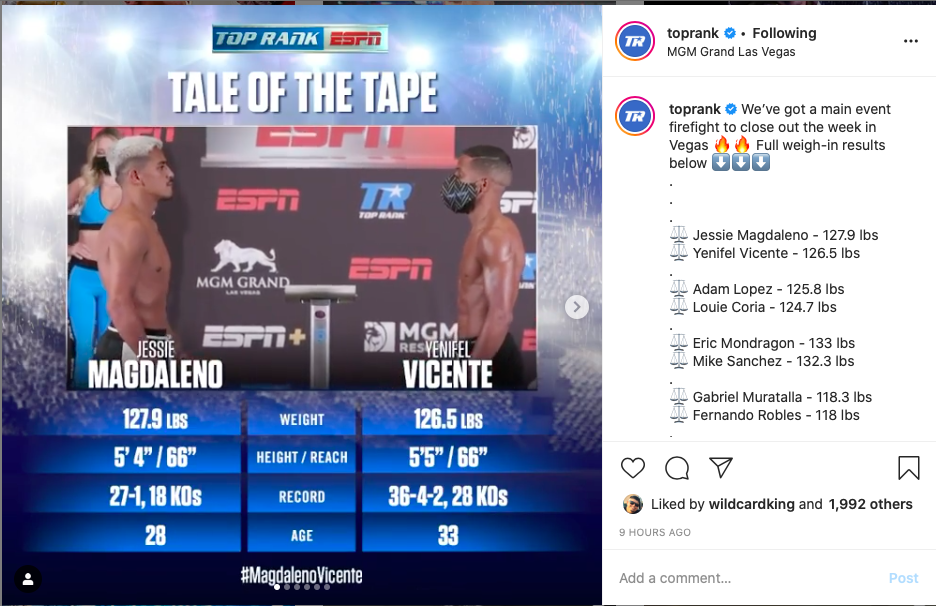 That, really, was the theme of the Wednesday sesh with Kenny, a Bronx-born Los Angeles resident who holds the title vice president, programming and acquisitions, at ESPN:

Back, briefly, to some context. Sports has come an absurdly long way since the recently fired communications director for the World Hockey Association New England Whalers and his kid Scott, with Bill’s pal Ed Eagan, turned their desire for the availability of more robust local sports coverage and putting bread on tables into the purchase of usage of a satellite transponder. Big league dreamer Bill Rassmussen incorporated ESPN in the summer of 1978, and the world has come very far since ESPN showed professional slo pitch softball games.

So, a Matt Kenny has a bio that contains the requisite buzzwords which signal that he is involved in the sports BUSINESS: Kenny “leads all business activities for Combat Sports and sets the strategy to help maximize its audience and revenue across platforms. Kenny also leads future rights negotiations and serves as the day-to-day point of contact for rights holders, such as UFC and Top Rank, and internal stakeholders.”

Kenny is one of the main guys who deals with Dana White and his UFC fare, and Bob Arum and company, who put together shows which run on ESPN’s “regular” aka cable and satellite signal-spreaders as well as the “direct to consumer” option, ESPN+.

It made sense to folks who are paid to figure out these things that when coronavirus really touched down and started making the rounds in America, combat sports, because of their construction–fights are usually made quarter by quarter–likely would be a go to content source for the cable/satellite/DTC behemoth which had to frown when all the pro sports league sputtered to a halt.

“We have an outstanding relationship with Bob Arum and the entire Top Rank crew and we stayed in touch with them from day one,” Kenny continued. “We held weekly and in some cases daily calls.”

Top Rank’s people and ESPN people conferred on those Saturday library blocks of “classic” fights, Kenny said, and were always checking the lay of the land as to when combat sports could get back to business, in modified form. Dana White looked to forge ahead, and publicly said he took pride in being ahead of the pack, while Arum made no secret he was not looking to be so brash with his re-entry planning.

White had his cluster of events, and sure, lessons were learned from those sessions that unfolded in a milieu that wasn’t on the theoretical radar of but a small cadre of epidemiologists, really. Arum told me over a span of six or so weeks that he was talking to ESPN, and would be OK with having live bouts only when he was working in concert with a state commission, and his partners at ESPN. It turns out the Nevada commission formed an outline of protocol that would be acceptable to state powers that be, and so then Top Rank and the Bristol, CT-based entity hashed out specifics. Like, when will the fights unfold?

Kenny and suits at ESPN got it that with pro sports all but dormant, that gave freedom of movement. Tuesday, that day had a history as a good day for presenting prize fights, so they decided on Tuesday, June 9, and then Thursday, June 11, to give a bit of breathing room for the Top Rank gang.

“I thought it was great,” said Kenny, who lauded Arum for being ringside, masked up, and monitoring the five bout return to the stage for major league boxing promotion. 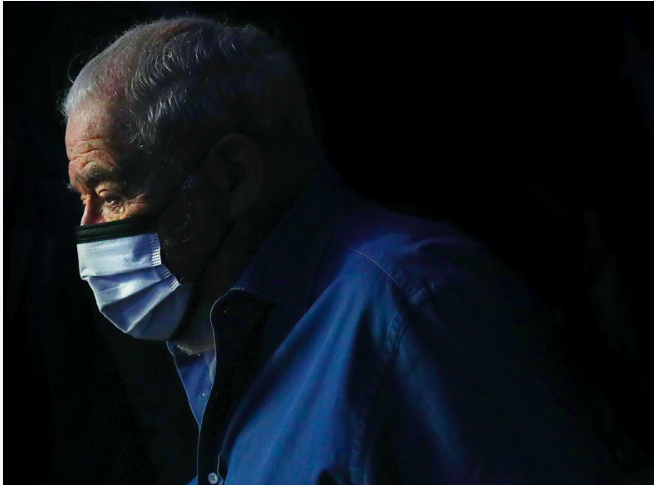 I asked Arum before the Tuesday fights if he’d be in the building. “I’ll be the old masked man twelve feet from the ring,” he replied. (Photo by Mikey Williams for Top Rank)

From Los Angeles, Kenny applauded the work of Brad Jacobs, and the on air talent, Joe Tessitore, Andre Ward, Tim Bradley, Mark Kriegel, Bernardo Osuna and the behind the scene talent.

“Top Rank should be given a lot of credit for the amount of work they did, it looked fantastic,” he said. “Really, it was an incrediby safe collaboration between companies, hats off to Top Rank.”

He gave a extra hat tip to the segment with Tessitore, Ward and Bradley addressing “social injustice issues.” I agreed, no smoke blowing. Bradley’s story about choosing to drive his fancy card with his 4 year old in it to the kids’s school, and getting pulled over, and having to explain why to his kid, that element stood out on a card that was more so a “let’s remember how to ride this bike” sort of event than a splashy celebration of the A grade pugilism.

I asked Kenny about that; some onliners grumbled that the matchups could and should have been stiffer. The executive wasn’t inclined to veer into dissection mode concerning degree of difficulty for A siders Shakur Stevenson, Jared Anderson, Guido Vianello, Robeisy Ramirez and Q Cash.

The seamlessness of the production, which made you forget, often times, that a strict pandemic protocol was being adhered to, Kenny kept coming back to that. The ten count for fight game persons who succumbed to coronavirus was deftly handled, he said, and he wanted to shout out Mike McQuade, VP of production, for his commendable effort. “All those features really helped give the fan the lay of the land, of  society today,” Kenny stated. “The story-telling was fantastic.”

He liked how ESPN personnel made it smartly and safely to Vegas, he continued, and so no, he wouldn’t be prodded into making a call for those coinflip fights you all know I bang the drum for.

“We’re thankful boxing is back, period, hard stop,” he said. “The path to get here, it was remarkable. I coudn’t be happier. In terms of matchmaking, Top Rank makes the matches, we stay in communication, they are up front with us, and we proudly produce and distribute it.”

I tried to get a tidbit or two about special elements that might stand out on the card which screens tonight, which is headlined by a catchweight (128 pound max) scrap between 27-1 Jessie Magdaleno (below) and 36-4-2 Yenifel Vicente. That’s one of four fights to watch, with a 7 PM ET start in “The Bubble” in Vegas. 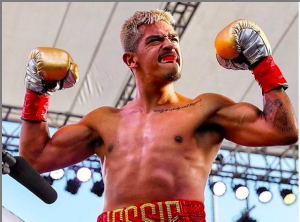 Next week, more content, which will mean boxing will be there for fans of sports as a whole, who maybe haven’t been inclined to put pugilism in their rotation.

“We look at this as boxing coming back in a big way, and we’re proud to be on front lines, five cards in less than two weeks,” said Kenny, a longtimer at ESPN, who worked on that 2005 ESPN PPV that had Antonio Margarito vs Kermit Cintron as main event. “We hope this is the start of a big summer.”

—Michael Woods is a Brooklyn-based reporter/analyst.