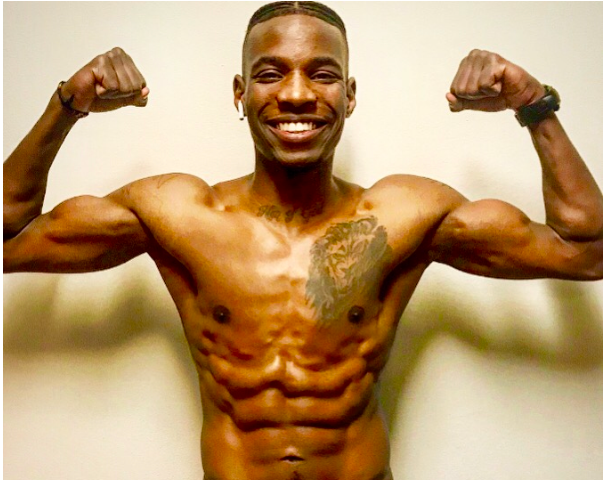 Best night of pro career and why: Earley says there are two particular moments that stand out to him. One on fight night, the other in the gym.

“The first would have to be the day I got a chance to visit and spar at the Mayweather gym in Las Vegas. I had more than my fair share of people tell me how difficult it would be, how the gym energy was, and how stiff the competition was. That was something that only fueled me and made me want to challenge myself. When we got there, we weren’t exactly met with open arms, but weren’t completely dismissed either. The tension was definitely there. Seeing all the faces that I had only known from TV, I thought to myself, “This place, this energy, this edge – I belong here”. The experience of training there gave me too much to even describe with words.” 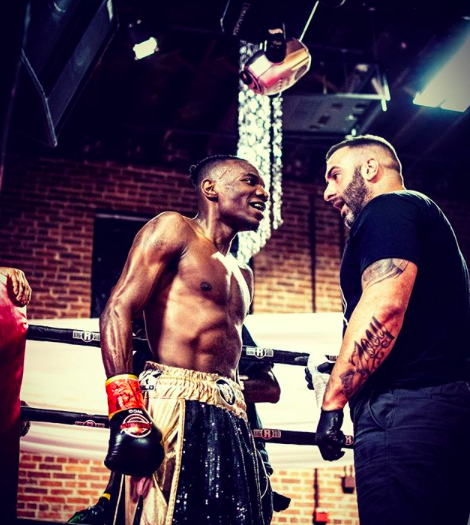 “The second would have to be my last fight (against Marklin Bailey on September 21, 2019; see below, to see the winner’s grin, on fight night) for the National Boxing Association (NBA) junior welterweight Americas title. I felt like this night was earned from several angles; my preparation in the gym, the opponent selection, and building relationships on the promotional side of the business. It was the full package in all of those aspects.”

“After winning and making my way to 10-0 (5 KOs), which is a good milestone for a lot of prospects coming up, I thought to myself, “This is the beginning of the beginning.” It gave me a whole new boost of motivation and feeling of accomplishment. I believe that confidence is built from saying you’re going to do something, then following through on your word. I said that I would make it to this point, and I, as well as my team, made that happen.”

Worst night of pro career and why: In March of 2018, while sparring with Brooklyn-based junior welterweight Zachary Ochoa (21-1, 7 KOs), Earley suffered the first major injury of his athletic career. As he slipped a punch his foot sunk through a weak spot in the ring mat, severely rupturing ligaments in his midfoot. Commonly known as a “Lisfranc” injury, the damage to the arch of his foot required significant rehab. It would keep him out of the ring for an entire calendar year.

“I thought my career was over. I was in crutches for months. I didn’t know if I’d ever even walk the same again. There are not many feelings in this world worse than the feeling of a crushed dream. That was the only thing going through my mind the day that injury happened. All of the talk of recovery and getting back to normal goes in one ear and out the other, it just sounds like white noise. Injuries can take an athlete to a dark place.”

“Despite it being one of the worst days of my career, I credit a lot of the resilience, mental fortitude, and toughness I have now to that time of strife. So in the end, everything came full circle and it made me better.”

Why he’s a prospect: Earley had several notable accomplishments as an amateur. He won the North Carolina Golden Gloves five times. He would go on to place second in the southeast regionals in 2016, losing to Money Powell IV (10-1, 6 KOs) by one point.

“That loss was tough. I had pneumonia during training and couldn’t cut down to 141-pounds, so I had to fight a division higher. I ended up facing Money Powell in the finals at 152-pounds. It was funny because I originally weighed in at 148-pounds; they actually told me that I needed to gain a few pounds before the fight. I definitely wasn’t at my best.”

Since turning pro in late 2016, Earley has built quite a following in his hometown. His mother, LaVonda Earley-Stacey, created Vegas Grand Boxing Promotions in 2018 and the family has self-promoted his last four bouts. They’ve drawn larger crowds and local media attention with each event. His almost 16K Instagram following was organically built, no “pay for followers” services or bots. 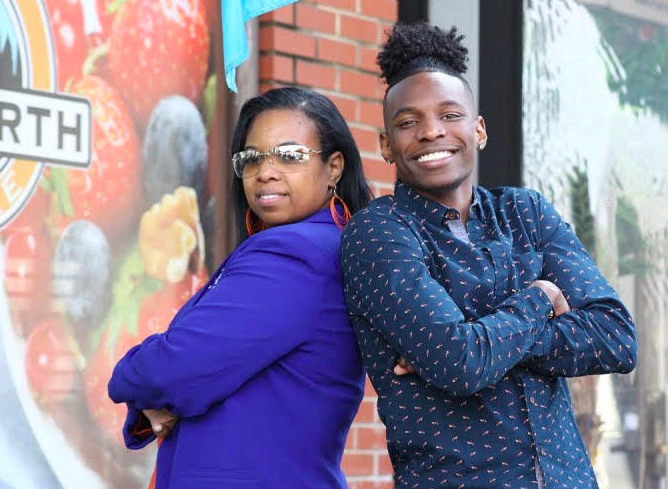 The proud mama and the ascending son got each others’ back.

A highly skilled out-boxer who can fight orthodox or southpaw, Earley has a lot of potential. He just needs an opportunity.

Why he’s a suspect: Simply put – lack of opposition. Only two of the opponents LaVonte has faced so far currently hold a winning record. North Carolina isn’t exactly known as a boxing hotbed. The list of fighters from the Tar Heel State is a short one.

Former heavyweight champion Floyd Patterson was born in NC but moved to New York as a young boy. Same goes for Sugar Ray Leonard, who was born in NC but raised in Washington DC. Calvin Brock came all the way from Charlotte to win The Ring Knockout of The Year honors with his one-punch left hook KO over Zuri Lawrence in 2006. Later that year, Wladimir Klitschko flattened him with one shot in their IBF championship bout. Perhaps the most accomplished “born and bred” North Carolina fighter was James “Bonecrusher” Smith, who briefly held the WBA world heavyweight title before losing to the eventual undisputed champ Mike Tyson in 1987.

Earley proclaims that the lack of boxing history in North Carolina fuels him to be a pioneer.

“At times I feel like I am here to be what Apple was to the smartphone industry. Once people were introduced to a cellular device that featured no buttons, everybody wanted one. Before that, nobody believed there was any demand for it. But through a lot of hard work and being the first to invest in an untapped market, Apple went on to dominate in the industry. I plan to take the same approach when it comes to boxing and North Carolina.

“I want to go to the big boxing markets and show them that we have talent here too, maybe just not the same opportunities, then bring it back here and blow up this market. Yes, the lack of consistent high-level sparring is inconvenient, and the southeast stigma when traveling to more powerful commissions is less than flattering, but I believe anything worth having won’t come easy.”

Storylines: Like many fighters before him, LaVonte says boxing saved his life. As a teen he began hanging around the wrong crowd. Things quickly spiraled out of control and just 15-years-old, he was in serious trouble and his life was at a crossroads.

“I discovered boxing right around that same time. Despite everything I was going through, boxing gave me focus. I think anyone can rise out of any situation if they have a goal, something to work toward. I believe that God put boxing into my life at that time. It kept me from being another statistic. It also helped to reinforce my values and aided in my transition from being a boy to becoming a man.”

When it comes to personal inspirations LaVonte looks no further than his mother. She was diagnosed with stomach cancer in 2012. After a brief remission, the cancer metastasized in 2016, spreading to her liver and breast. LaVonda Earley-Stacey has been living with Stage Four cancer ever since. Yet she hasn’t let it stop her from supporting her son’s career and promoting his fights. It’s an amazing story of perseverance, dreams, and love.

“My mother is one of my biggest inspirations, she is a tougher fighter than I am. Watching her battle cancer since 2012; she is the strongest and most resilient human being that I know. She is a big reason that I fight. My dream is to be able to take care of her financially. You can’t say you made it until you buy ya’ mama a house.”

With all he’s been through in his personal life, while witnessing his mother’s struggle, Earley uses his platform to mentor kids in the Charlotte area. He not only wants to entertain in the ring, but make a difference in his community outside of it.

“I strive through my career to inspire people that come from the same type of background that I come from. I want to help them find that thing that gives them the same purpose boxing has given me.”