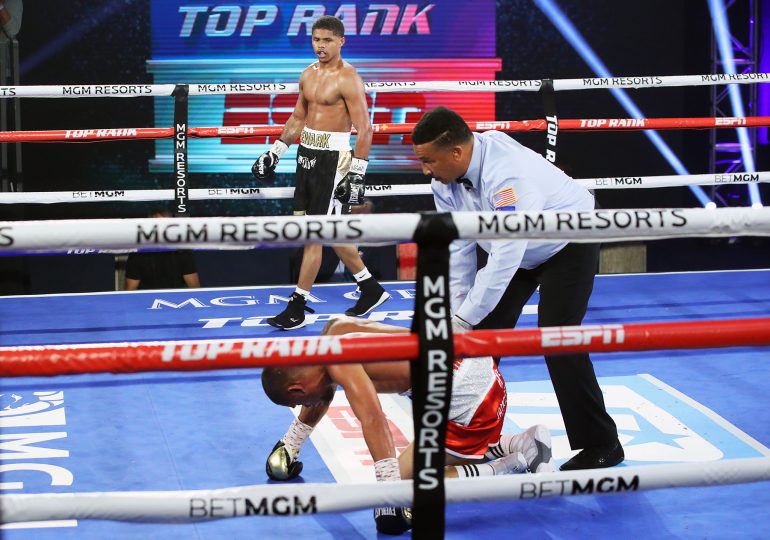 Shakur Stevenson pitched another masterpiece, 227 days after his last fight.

In a dominating performance, Stevenson knocked out Felix Caraballo in the sixth round of a complete mismatch in the main event of the Top Rank Boxing on ESPN card at MGM Grand Conference Center in Las Vegas Tuesday.

The card was boxing’s first televised main event in the United States since March 13 due to the COVID-19 pandemic. Stevenson was also set to headline a card against former three-time title challenger Miguel Marriaga on March 14 at Madison Square Garden’s Hulu Theater, but that event was also canceled, along with a countless number of other shows.

The 22-year-old Stevenson, who holds a title at 126-pounds, toyed with Caraballo in his junior lightweight debut until a left to Caraballo’s solar plexus ended their slated 10-round contest.

Caraballo (13-2-2, 9 KO’s), of Puerto Rico, was knocked out for the first time in his career. It also ended a five-bout winning streak that had stayed intact since July 2018. However, those wins came against opponents of a caliber far below that of Stevenson.

And with no fans in the bubble, it sounded equally painful on the @espn broadcast.

Caraballo pressed the action early, but Stevenson unloaded a right hand to the body that sent the Puerto Rican to a knee.

That set the tone for the rest of the fight. In the second round, it was target practice for Stevenson, who ripped Caraballo with quick straight lefts and right hooks. Caraballo continued to press forward but had no answers.

In the fourth round, Stevenson, a 2016 Olympic silver medalist from Newark, New Jersey, continued to obliterate Caraballo with a plethora of head and body shots. Caraballo landed a body shot, but his body language seemed to indicate that he knew the end was near.

Throughout the bout, Stevenson landed four to five punch combinations with ease. In the fifth round, Caraballo’s head swung as if it were a bobblehead as he got clipped with a right uppercut, straight-left combination.

Stevenson was warned for landing a right hand to Caraballo’s groin in the sixth round. However, with approximately 1:39 remaining in the sixth round, Stevenson unloaded a vicious left hook to the solar plexus that put the icing on the cake in what was a scintillating display of speed, movement, defense, and ring intelligence.