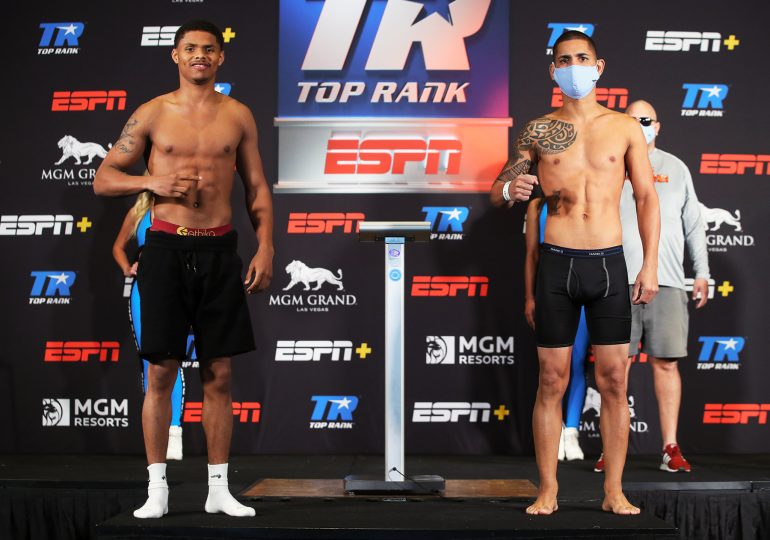 A lot has changed in the three months since there was last televised boxing in the United States. But after a pre-fight protocol which includes tests for the virus that causes COVID-19 upon arrival in Las Vegas and after the weigh-in, the fighters for Top Rank’s first show in the United States since February hit the scales on Monday.

WBO featherweight titleholder Shakur Stevenson (13-0, 7 knockouts) had no issues making the contracted weight of 130 pounds for the ten round non-title main event at the MGM Grand’s Conference Center Grand Ballroom. His opponent, Felix Caraballo (13-1-2, 9 KOs), needed a second trip to the scales to shed the half pound to make the weight.

“I watched like one round. I see everything I needed to see in that one round, and I see a lot of holding in his game, so I’m going to expose it,” said Stevenson at this week’s media conference call.

The referee will be Russell Mora, with judges assigned being Tim Cheatham, Dave Moretti and Steve Weisfeld.

Stevenson, a 2016 U.S. Olympic silver medalist, was supposed to make his first title defense against Miguel Marriaga in mid-March, but the show was canceled when New York City effectively shut down all events in response to the coronavirus pandemic. 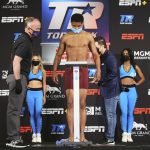 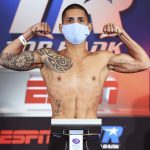 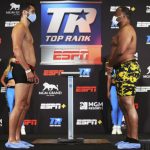 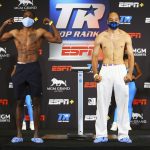 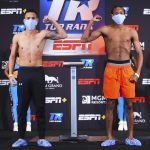 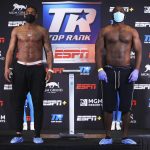 The entire five fight card will be televised live on ESPN in front of an empty audience as the sport begins to find its way back. The card begins at 7 p.m. Eastern time.

The co-main event, which was to feature Mikaela Mayer facing off against Helen Joseph, but Mayer revealed Sunday that she had tested positive for the novel coronavirus and would be quarantining, causing that fight to be nixed.

“I’m really proud that Top Rank is the first promoter out of the box. We have a great fight on a great show on June 9, then we continue on [with] virtually two and three boxing events a week. Boxing is going to come back — believe me — bigger and more important than ever,” said Top Rank CEO Bob Arum, who relished that he was able to return to the airwaves before team-based leagues like the National Basketball Association and Major League Baseball could.

The other fights and weights are as follows: