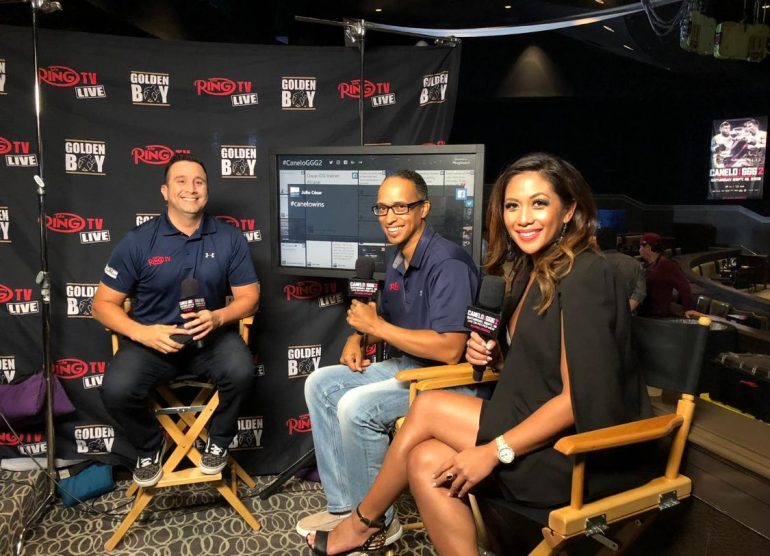 Cynthia Conte is tough to miss. Her Demi Moore-like raspy voice has a lure, and she’s often one of the very few females sitting in press row at major fights.

She’s also not afraid to ask tough questions—and more importantly, she knows what she’s talking about and she’s fearless.

Conte, 40, has loved boxing since she owned two gyms in Los Angeles, California, where Oscar Valdez and Abner Mares once held their training camps. She was mesmerized by the art of the sport, and drawn to the masterful footwork of the fighters because of her dance background.

Now, she’s started a podcast venture called “The Real Fight With Cynthia Conte,” and she’s already had on great guests like Bob Arum.

Conte, who has interviewed all-time greats like Manny Pacquiao in the past, has surged quickly up the boxing media food chain.

Though, she’s been handed nothing.

Her first foray into boxing came during the weekend of March 18, 2017, for the Gennadiy Golovkin-Danny Jacobs fight at Madison Square Garden.

“I just kind of dropped in, and no one knew me, so I really didn’t know what I was doing,” recalled Conte, who’s Filipino and Italian. “I knew how to interview people, and I took off running from there. It is a male-dominated field. Women have to still prove themselves. 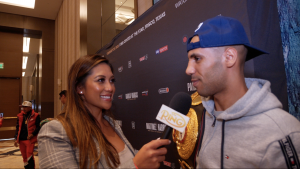 Conte worked for Channel 5 in Los Angeles before taking on a new role in boxing.

“The only one I have to prove anything to is to myself. But there were things that went on. There were times when some people made me feel uncomfortable and I’ve told them, ‘Don’t f—— do that!’ Then, they go away. But there have been times when some people have said inappropriate things to me. I laugh it off, for the most part, and I don’t bother with them after that.”

Conte, who worked for KTLA (Channel 5) in Los Angeles, said began reaching a comfort level in boxing 2019. She learned the landscape and the important players in the sport, as well as growing used to the media menagerie that travel to each major fight.

“I always say my dream career fell into my lap,” Conte said. “I moved back to Los Angeles from New York and wanted to do something with boxing, or entertainment reporting. I learned on the job, and (Ring editor) Doug Fischer really took care of me.”

Conte comes in for fight week and provides all of the video content that you’ll see here on RingTV.com.

“I have no problem staying true to who I am,” Conte said. “I’m currently in a good place, but when the COVID-19 pandemic started, no one really knew what to do. We do some Zoom interviews, but for a lot of people, it was the same questions and same storylines.

Arum, for example, reveals that he initially didn’t like boxing, to meeting Muhammad Ali through football Hall of Famer Jim Brown and eventually becoming Ali’s promoter. Arum’s Brooklyn, New York, background is covered from growing up around Ebbets Field, to graduating Harvard law school, to working for John F. Kennedy.

“Many people didn’t know his background, as a lawyer, to working for JFK, and we went through five different decades,” Conte said. “I think the biggest surprise that I’ve come across in my time with boxing is how small the boxing world really is.

“You think the world of boxing is huge, because it’s so worldwide. But guys I used to read and follow on social media, now I’m sitting ringside with these guys. Our world is very, very small and it’s the most dangerous out there.

“We all love the brutality, and the savageness of the sport, and it’s a very forgiving sport. Because there is a lot of s— in boxing. I’m pushing for more, and I’ve always been taught to work your ass off.

“At any moment, everything you work for can be taken away.”