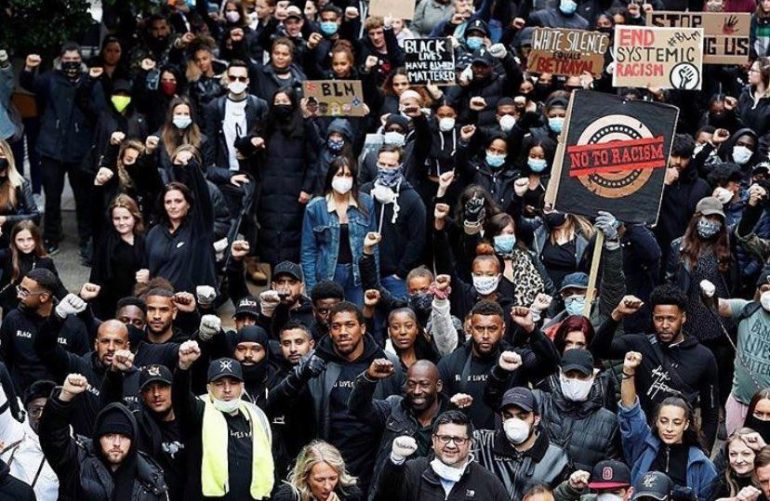 Anthony Joshua joined hundreds of protesters Saturday in his hometown of Watford, England to speak out against racism. Photo from Joshua's Instagram
06
Jun
by Ryan Songalia

An injured left knee didn’t keep unified heavyweight titleholder Anthony Joshua from joining a group of protesters in his hometown of Watford, England to speak out against “the virus” of racism.

The 30-year-old Joshua, who regained the IBF, WBO and WBA titles by avenging his defeat to Andy Ruiz in December, wore a “Black Lives Matter” shirt as he addressed a crowd of several hundred people who had gathered on short notice, talking about an issue that he describes as a pandemic in need of a vaccine.

“Sometimes it’s hard to talk out against racism. I grew up in Meriden Estate but people knew not to fuck with me,” said Joshua (23-1, 21 knockouts), eliciting a laugh from the crowd.

“We can no longer remain silent on the senseless unlawful killing, sly racism of another human being based only on what? Their skin color.

“We must not use the demonstration for selfish motives and turn it into rioting and looting. We need to be united in non-violent demonstrations.”

Protests have sprung up in all 50 states in the United States, and in many countries throughout the world, following the killing of George Floyd by a police officer on May 25 in Minneapolis, Minn. Four officers have been arrested and charged with crimes ranging from second degree murder to aiding and abetting second degree murder.

Joshua wore a knee brace and was seen using crutches and a scooter to move around, but a spokesperson told ESPN that the device was precautionary and was “no immediate concern,” and described the injury as a “slight twinge.”

In his speech, Joshua advocated for supporting black-owned businesses and called for an increase of “African and Caribbean people in the police force to understand our culture so they don’t have to racially profile us.”

Anthony Joshua spotted with crutches at the #BLMprotest in Watford. He suffered a left knee injury while running and needs 4-6 weeks of rest before resuming training.

"Racism is the virus and you and I are the vaccine. Speak up now." – Anthony Joshua 2020 #BlackLivesMatter pic.twitter.com/NKl0GyeMfv

Joshua had been scheduled to meet IBF mandatory challenger Kubrat Pulev on June 20 but the fight was postponed due to the coronavirus pandemic. The fight is expected to be rescheduled for later this year.