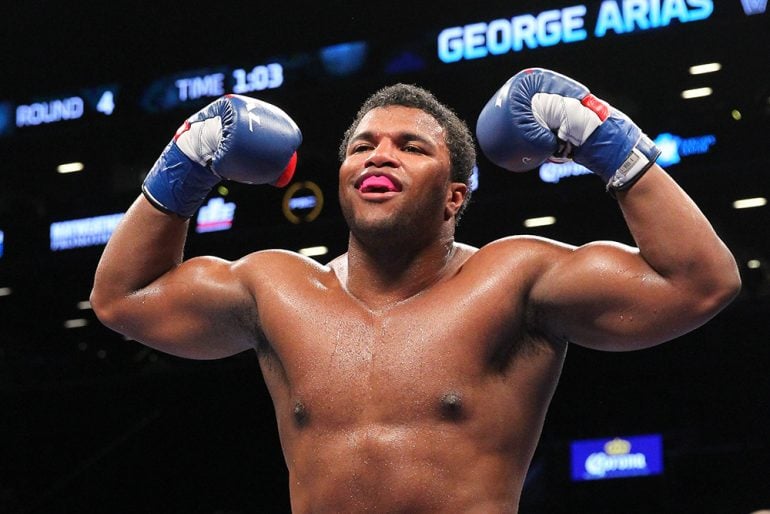 When you meet George Arias or watch him fight you may find yourself reminded of two of the greatest heavyweights that the world has ever produced.

“The first time I ever heard that was in high school because there was a book about Muhammad Ali and people put the cover next to my face. I didn’t see it but too many people told me, eventually I am convinced,” said the heavyweight upstart Arias.

And secondly, when the Bronx-based fighter is in the ring, there is a nod to Smokin’ Joe Frazier in the way that he fights.

“I love the Joe Frazier style. I was only told one time to do that and then it felt proper,” Arias.

Arias, unbeaten after 15 starts since his professional debut in October of 2014, is not about to start comparing himself to Ali or Frazier, but it gives him an interesting narrative to make his career one worth keeping an eye on.

Arias, while keen to be an entertainer, is maturing to a level where he knows that sometimes you have to do whatever it takes to get a win.

“You want to believe that you are an entertainer but the reality is I’ve been in fights where they were tougher than you anticipate and in these moments you realize I just gotta get this win,” he laughed while talking to The Ring.

A six-round war against Ruslan Shamalov in his sixth fight, dropped while conceding a near 60-pound weight difference to Mario Heredia and on the deck again in May 2019 against Keith Barr has Arias juggling the acts of brawler and boxer.

“As much as you do want to entertain you want the crowd to understand the sport and understand the craftsmanship that goes into avoiding a dangerous punch from this guy. I could have got knocked out by a lot of fighters I fought because they had the power and I know they had the power. I treated them knowing that they had that power and that saved me a lot of danger. As much as I want to entertain, because it is in my nature to entertain, sometimes you forget and all I know is that this guy is coming for me and if the ref says break he’s coming back for me. As much as I want to make people go ‘Whoa’, I gotta think about the task at hand.”

The task at hand is, like every other fighter out there, to get back to fighting when boxing officially returns this summer. A couple of years shy of the big three-o Arias is aware that he needs to get moving and is hungry to get into a fight against someone who is at a similar career juncture to himself.

“I am open to more dangerous fights,” he insists.

Finding boxing at the age of 18 thanks to the Morris Park Boxing Gym in the Bronx, while spending some time at a girlfriend’s, has left him with no regrets about the decision to pursue the sport professionally after initially looking at it as a “cool hobby.”

Thirteen years earlier Arias and his family found themselves in America for the first time. Early memories for him were that of the language barrier when first attending school.

“I remember that was the reason… I wouldn’t say I got into fights; I was getting beat up. I didn’t understand why but later on I was like okay.”

Arias recalled life back in the Dominican Republic, a couple of thousand miles back home where he was born.

“Mainly being able to wander around and no matter how far I would go I was visible because there was no buildings, no nothing there. The house that I lived in had grass as far as you could see so I thought I was going far but I wasn’t. It felt really good to be able to do that.”

Should Arias keep winning, keep flashing that smile and continue to charm the masses then the Ali lookalike may become a proud export of a country that has given us talents and champions such as Joan Guzman, Agapito Sanchez and Elio Rojas. However, the six-footer is smart enough to know that there is work to be done in a division which has been dominated by giants for decades.

“All the prospects that are on their way up they got a lot to prove because there’s a lot of gatekeepers, a lot of dudes that will probably knock you out without even trying. This is the reason why knockouts are unexpected. Every man has the strength in their hands to change everything.”