Four Years After Muhammad Ali’s Death: The world came out to celebrate ‘The Greatest’ 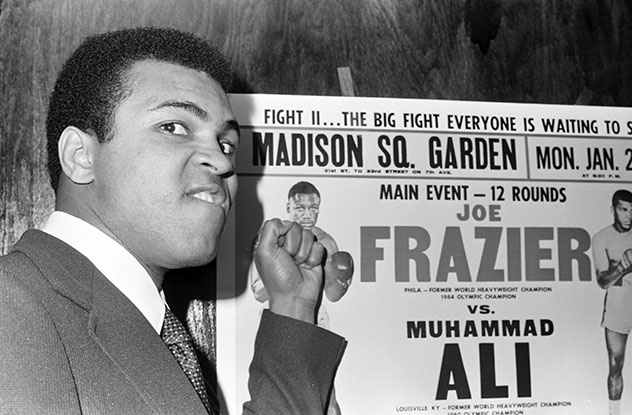 This is a repost of the RingTV.com story of Muhammad Ali’s funeral that appeared June 10, 2016. Even in death, “The Greatest” brought the world together. It seems poignant today considering what is currently taking place across the country.

LOUISVILLE, Ky. — You could feel his presence. It was everywhere. As was his tangible impact. You could see it on this sweltering, shirt-soaked day in this sleepy Southern town by the side of the Ohio River, into which he supposedly threw his gold medal.

People lined every street of Louisville on Friday afternoon to celebrate the life of “The Greatest,” Muhammad Ali, who died at the age of 74 on June 3, 2016, from septic shock due to unspecified causes, possibly a byproduct of Parkinson’s disease and the murderous punches he took. Among the multitude of people that his black hearse shuffled past were many that had known him in the old days. Teachers who had him in grade school or high school. Rival fighters who will be forever remembered just because they fought him. Neighbors who nodded to him on his way to school, or to the gym, or when he was on a morning run.

Then there were the fans, thousands upon thousands of them. Black and white. Young and old. Large and small. Men and women. Christians and Muslims and Jews. Famous and regular everyday people. All unified by him. They paid homage to The Greatest holding aloft signs, yelling his famous phrases and reminiscing. Lamp posts throughout Louisville were adorned with posters of his likeness, underlined by the phrase, “Float like a butterfly, sting like a bee.”

It was a ceremony befitting a head of state. In many ways, Ali was. He went from a polarizing figure to someone the world could claim. He will be remembered as swift, radical, zealous and determined. He was a poet before he recited poetry.

He was also bonding.

In the 1950s and ’60s, when the young Cassius Clay roamed the streets of Louisville, it was a city stuck in time where the Civil War was still being waged. Whites and blacks hardly acknowledged each other.

On this special day, there were no color barriers. The evidence of Ali’s impact came in an African-American woman in her mid-20s, laughing and talking with an older white woman with her child. It came in a white female police officer conversing with a group of black teenagers, all smiles and cordial. It came in the way everyone came together to honor and remember one man.

That’s what Muhammad Ali did.

He accomplished his dream for a day.

Boxing giants showed up, too. Evander Holyfield, Mike Tyson, Lennox Lewis, Bernard Hopkins, Bob Arum and Larry Holmes were there. All Hall of Famers, or future Hall of Famers, whom Ali’s legacy touched.

Balloons were attached to the pillars of the little pink home at the address of 3302 Grand Avenue, Ali’s childhood home, on Louisville’s west end. A nearby marker reads: “Muhammad Ali’s Home site. Cassius Marcellus Clay, Jr., was born on January 17, 1942, at Louisville General Hospital. He grew up and lived here at 3302 Grand Ave., with his parents, Odessa & Cassius Clay, Sr., and brother, Rudolph. Ali attended public schools that were mostly black, including Central High School.”

Some cried by his old house. Most laughed and rejoiced, which you have the sense is something that Ali would have wanted.

Rose petals were sprinkled along the 19-mile funeral parade route, which was also peppered by camera crews and talking heads, many probably not knowing the difference between a left hook and a clothes hook. But they were there to capture the moment. The procession of cars passed Ali landmarks, like the Muhammad Ali Center, down Muhammad Ali Boulevard, down Grand Avenue, by Central High School, before landing at Cave Hill Cemetery, the oldest cemetery in the tiny city, where soldiers from the Civil War are buried.

The Spalding University Center, where Ali learned to box, at 824 South Fourth Street, had a red bike hanging from the center, symbolic of the red bike stolen when Ali was 12 that launched his career. Up the street once stood the very restaurant that refused to serve Ali lunch, because he was black. An angered Ali threw the gold medal that he won as a light heavyweight at the Rome Olympics into the Ohio River. Or so the story goes.

There’s always been doubt about the tale.

But there was never a doubt about Ali’s incredible skills.

“I love the man,” said Holmes, who handed Ali one of his five defeats — and the only fighter to have stopped him. “My fight with him was terrible. It still bothers me. I was his sparring partner for four years and he taught me everything I knew. I hung with him and traveled with him. I didn’t want to fight him. I didn’t want to hurt him. I knew what he had and I knew what he didn’t have. I told him during the fight that I loved him. He told me, ‘Why are you beating me up then?’

“Look at all of these people. They love him. He would have loved this. He’s at peace now. That’s what is important to me. My friend is with God now.”

Laila Ali, The Greatest’s fighting daughter, said the toughest part for her will be telling her two children that they can’t see their grandfather anymore when they ask for him.

“I appreciate everything that everyone is showing, and I know that he’s out of his pain,” Laila said. “You see this outpouring of people here, and you see everything that my father fought for throughout his career, and the sacrifices that he made and what that really meant to people. It’s tough explaining to my children where ‘Papa’ is. I can let my children see who my father was with all of the stuff that I’ve saved through the years. It still hasn’t hit that he’s gone, but he’ll always be with me and with us.”

Hopkins was personally invited to the Ali ceremony by Laila. “B-Hop” isn’t known for being too emotional. But being in Louisville, and especially being asked by the Ali family, meant something very special to him.

“I can relate so much to (Ali),” Hopkins said. “We have so much in common, I think. We’re two fighters who aren’t afraid to speak our minds. We did have to change the way we fought. People forget when Ali began his career he won with quickness and hand speed. When I started, I was a puncher. Ali was disliked by a lot of people early in his career, and there were a lot of people who didn’t like me.

“As he went on, the public embraced the man. As I’ve gone on, I feel the public has embraced me. Ali, to me, was bigger than boxing. When I think of Ali, I think of Nelson Mandela. When I talk of Ali, I think Martin Luther King. When I talk about Ali, I think of Gandhi. Christians loved him; Jewish people loved him; Muslims loved him. Look at all of these people out here with their hands raised, chanting, ‘Ali, Ali, Ali!’ That tells it all. He was loved by everyone. He brought everyone together. He accomplished his mission. Now it’s up to us to keep his mission alive.”