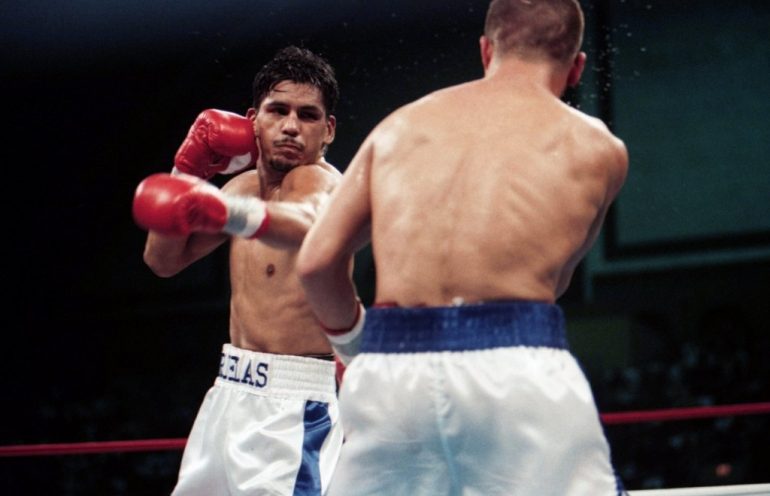 Photo from The Ring archive.
01
Jun
by Anson Wainwright

Gabriel Ruelas fought his way out of poverty in Mexico to live the American dream and become the WBC junior lightweight titleholder in the mid-1990s.

Ruelas was born in Yerbabuena, Jalisco, a small village in central Mexico on July 23, 1970. He was one of 13 children.

As an infant he was always sick and on one occasion his family thought he had passed away. They were going to bury him but wanted to baptize him first. The water resuscitated him, made him cry and saved his life.

“[Life] was so different, very simple,” Ruelas told The Ring of his early years. “We would go to the mountains to milk the cattle and walk it back to our house. We were very isolated from everyone else. The nearest town was an hour away on a donkey, we didn’t have any cars. We didn’t know what boxing was.”

As Gabriel grew older his family wanted a better way of life for him and younger brother, Rafael. When he was eight years old his family decided it was time for them to join some of their elder siblings in America, so they headed to the nearest big city to begin their journey.

“When I got to Guadalajara, I thought it was the U.S.,” he said. “I had never seen kids with shoes, all we wore were huaraches.”

Met by his aunt and uncle in Guadalajara, they took both brothers to Los Angeles. For the first couple of years he went to school and tried to adapt to the new way of life. However, Ruelas never liked school, and when his older brother, Juan, told him about boxing, he decided to give it a try.

When Ruelas was 12 he began training with Joe Goossen. He developed into a good amateur and had aspirations of fighting at the 1988 Olympics, but with him not being a U.S. citizen, Goossen suggested that he try out for the Mexican team. That proved to be problematic.

“I stopped the guy in the first round and my trainer was like, ‘Can he represent [Mexico] now?'” Ruelas explained. “They said, ‘He can’t represent us yet. He has to fight in a tournament because we already have a fighter in his weight, so he can’t just come in and take his place.’

“I fought him, it was [future WBC lightweight titleholder] Miguel Angel Gonzalez. He was good, but I was good too. Joe told me it was going to be very hard. [Gonzalez] won and he went to the Olympics.”

Ruelas thought that was the end of his boxing dream and he’d have to get a job, but Goossen saw something in the brothers and turned Gabriel professional in September 1988.

Moving quickly, he was 21-0 when he faced Jeff Franklin in April 1990. Ruelas suffered his first loss – a seventh-round stoppage – but a freak elbow injury threatened to curtail his career. He worked hard, however, and although he still can’t fully extend his right arm to this day, the determined young fighter was able to return 14 months later. After two comeback wins, Ruelas claimed the NABF 130-pound title. 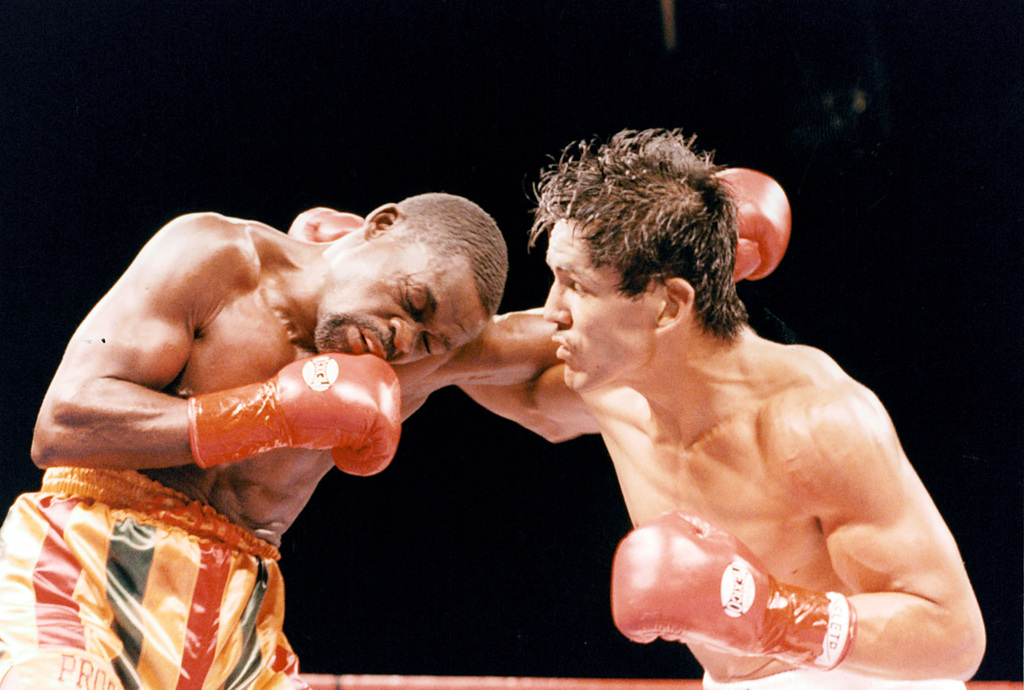 Ruelas at war with Azumah Nelson in their 1995 rematch. Photo from The Ring.

In February 1993, Ruelas met WBC titleholder Azumah Nelson on the undercard of Julio Cesar Chavez-Greg Haugen at the Azteca Stadium in Mexico City. Ruelas dropped a narrow majority decision before a record attendance of 132,247 fans.

“The experience of that show is like no other.” he said.

It proved to be a valuable learning curve. Over the next 18 months, Ruelas totted up five wins to earn himself a second title shot. This time he met Jesse James Leija, who had unseated Nelson, and in an excellent fight that saw both men on the canvas, he prevailed via unanimous decision.

“That is probably the best feeling in my life,” he said of his title triumph. “Boxing made me believe in life – dreams come true – it was beyond special. I said, ‘Now God can take me, I’ve done everything.'”

Rafael was beaten inside two rounds, but Gabriel’s bout ended in real tragedy. After being stopped in 11, Garcia fell ill, lapsed into a coma and passed away 13 days later.

The events of that night have long stuck with Ruelas.

“I was physiologically messed up,” said Ruelas. “I felt guilt, I felt sick, I felt responsible for what happened to Jimmy.”

When he met Nelson in a rematch, the mental residue of the Garcia tragedy resurfaced and he was stopped in five rounds.

“I guess I was traumatized,” revealed Ruelas. “During sparring it wouldn’t happen, but once the fight [with Nelson] started it came back. You can’t prepare yourself for that.

“Throughout the fight I saw Jimmy in one corner, laughing, as if to say, ‘This is what you get!’ I felt like that should be me.”

Ruelas stuck with it, however, and made another title run. He met Arturo Gatti for the IBF 130-pound title in what was chief-support to the Lennox Lewis-Andrew Golota bout in Atlantic City in October 1997.

Both men traded heavy leather, both were hurt and both were down in a dramatic encounter. Gatti dropped Ruelas in the fifth and although Ruelas made it to his feet the fight was called off. It was later named The Ring Magazine “Knockout of the Year” and “Fight of the Year.”

“The ref stopped it, he didn’t give me an eight count, I hit the mat hard,” Ruelas recalled. “I love that fight because of the rage we had; the way we were fighting.” 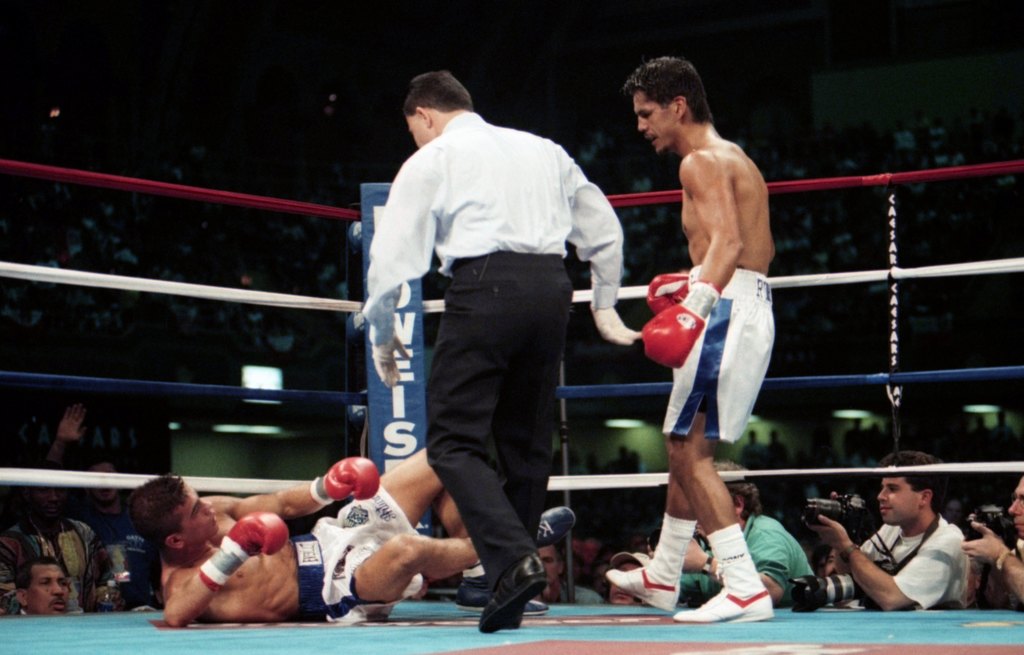 Ruelas knocks down Arturo Gatti, who recovered to win by stoppage. Photo from The Ring archive.

Ruelas fought on with mixed success before retiring following a loss to Courtney Burton in 2003. His final career record was 47-7 (24 knockouts).

Now 49, Ruelas lives in Los Angeles with his wife, Leslie. They have two sons.

“I really like spending time working in our garden, which is something I used to do on the ranch in Mexico when I was a kid,” he said. “I also stay in shape by walking my neighborhood in Los Angeles. My wife makes fun of me and says that I’m like Forrest Gump – I could walk for hours (laughs).”

Ruelas graciously took time to speak to The Ring about the best he fought in 10 key categories.

BEST JAB
Azumah Nelson: He not only used his reach, I think he knew how to use his shoulder with it and made his jab seem like he had a longer reach. The Professor had experience.

BEST DEFENSE
Nelson: I couldn’t land the shots I wanted. His reactions were very quick in evading my punches.

BEST HANDSPEED
Arturo Gatti: Believe it or not, Gatti was fast. Maybe it was just the way we were fighting, but he stands out as fast.

BEST FOOTWORK
Jesse James Leija: Leija was pretty good, he had good footwork. I happened to catch him with some shots but he made me work for them.

SMARTEST
Nelson: Azumah was hard because he was very experienced. His counter punching and his ability to anticipate where I was going to throw. His ring generalship – he was able to dictate the pace and work the ring better than I was. When you know how to do that, you build up points and win the fight – that only comes from a very experienced champion.

STRONGEST
Gatti: With most fighters, whenever I would hit them, I could feel that they felt the impact of my punch. But with Gatti, I felt like I was hitting a heavy bag – just that will [power]. Even though I knocked him down, I felt like my punches weren’t moving him and that he was someone I would have to break down.

BEST CHIN
Jesse James Leija: I never considered myself that big a puncher. I liked to make guys look bad; be in front of them and not get hit, like you saw with Leija. I would be right there and he couldn’t touch me. I thought that was more entertaining for the people, but of course some people like punchers. I would say the fighter with the best chin I ever fought was Leija because I hit him with such great, clean shots but he still kept coming at me.

BEST PUNCHER
Gatti: My wife (laughs). Arturo hit hard; when he hit me, [the punches] were heavy. I carried them through the fight, even the jab, it was like a heavy hammer.

BEST BOXING SKILLS
Leija: He has similarities to me; it was like looking in a mirror.

BEST OVERALL
Nelson: He had everything, he fought everyone, he had all that experience. Even though I lost the fight, I felt like a winner anyway. There was nothing for me to lose [against him].