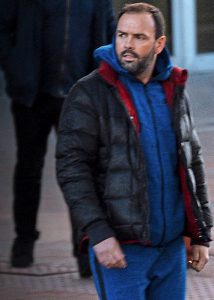 His guests on this episode are two distinguished Irish sports writers – Kieran Cunningham, Chief Sports Writer at the Irish Daily Star in Dublin and Ewan MacKenna, Host of The Black Eye Podcast and columnist for the Irish Independent News. They discussed the recent comments by promoter Bob Arum about using alleged drug cartel boss Daniel Kinahan as his agent in United Arab Emirates to negotiate a potential deal for the heavyweight championship unification fight between Tyson Fury and Anthony Joshua.

Additionally, they spoke about the origins of MTK Global and the chilling effect that the shooting at The Regency Hotel in Dublin in 2016 has had on boxing in The Republic of Ireland.

On how surprising it was for Bob Arum to openly speak about employing Daniel Kinahan as an agent of Top Rank in the Middle East:
Kieran Cunningham: “In one way I was very surprised because Bob Arum is such a prominent figure in the world of boxing for over 50 years and given Daniel Kinahan, to be kind, he has a checkered reputation and that’s being very kind. So for him to talk so openly about what a great guy he was and calling him Captain Dan and how he’s the guy that makes things happen in the Middle East. It was a bit of a surprise from that point of view. But at the same time, over the last three months it’s been very interesting. It seems like there’s been a concerted campaign to rehabilitate Daniel Kinahan and to reinvent himself as a boxing promoter because he was obviously one of the founders of MTK when it was MGM. It was previously called MGM and they had to change because of a legal action from MGM in Las Vegas.

But, MTK have been very keen to distance themselves from Daniel Kinahan the last few years. They said there’s been a buyer (Sandra Vaughan) and that he’s had nothing to do with them. But now they’ve announced that he’s an advisor. Bob Arum said he’s advising him and Top Rank. And that he helps with negotiating things with Frank Warren and Eddie Hearn. And now it was announced two weeks ago that he’s an advisor for a group called KHK sport in Bahrain, which are backed by the Bahraini Royal family, which have huge money behind them. And you know, there was a rap song released on YouTube three months ago that had all these conspiracy theories about Daniel Kinahan and how he was an innocent man and the media and the Irish government and the areas police force had been out trying to set him up.

Then a supposed documentary was released a couple of weeks ago putting forward the same conspiracy theory. There’s been this drip, drip feed over the last few months. They’re just trying to rehabilitate Daniel Kinahan’s reputation. Because Daniel Kinahan, two years ago in the high court in Dublin, he was identified by the Criminal Assets Bureau as controlling and managing the Kinahan organized crime group. And this is an organization that smuggles drugs and guns into and out of the UK, mainland Europe. It has been involved in money laundering all over the place. It is a major drugs cartel. It’s involved in a feud in Ireland that’s killed 18 people and 16 of the murders have been by the Kinahan cartel. So for him to be suddenly talked up by so many people in boxing when in court, so much has been said about him. It’s really surprising.  He has no criminal convictions himself.

Daniel Kinahan, just to fill you in on his background, is a son of Christy Kinahan who was known as the Dapper Don. (Christy) has convictions for drugs and money laundering in three different countries and he was a major gangland figure in Ireland. Eventually, he’s in exile in Spain. The last we heard he was in Hong Kong. I think he’s moved around because of various police forces wanting to talk to him about various things. 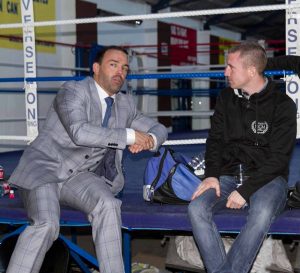 Because there’s this thing that’s been spawned by MTK that (Daniel)’s been treated very unfairly. That it’s a rags to riches story that this guy from Dublin’s inner city has risen to the top in boxing. But you look at his family and like they weren’t street traders where if they were trading in something, you know, it wasn’t fruit and vegetables.

So, there’s a lot of questions here, Kurt. The big question to me it really highlights is, and I think you’re interested in this and your work as an attorney and in boxing management is, “Who runs boxing?” Like if this happened in soccer you would go to FIFA, with a list of questions about Daniel Kinahan. How is this guy involved? How was he allowed to be involved? Are you concerned about these various questions that have been brought up about him? If he was in track and field you’d go to the IAAF. But who runs boxing? Which governing body do you go to if you have a problem with Daniel Kinahan?  Who do you actually go to?”

On whether there’s a question that the money behind MTK has come from the Kinahans.
Ewan MacKenna: “No, I don’t think so. I mean you can maybe pretend that MGM when it was a very small operation in Marbella (Spain) it may have been just Macklin, you know, doing something locally where he lived and Daniel was helping out in the background. But I mean, what we started to see early in Ireland because in the Republic of Ireland, the South of Ireland, it’s been a bit of a graveyard for pro boxing over the years. I mean, you go back to the ’90s when I think Lennox Lewis had to give out free tickets and Prince Naseem Hamed had to do an open session on one of the main streets in Dublin. And a lot of professional Irish fighters, I mean it was kind of knocking on doors and selling tickets for their fights. It was a grim existence.

Then all of a sudden when MTK come on board suddenly (just) okay boxers are on relatively lucrative contracts, they’re living it up. 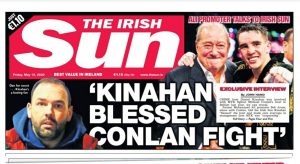 Then the next wave, the bigger boxers – Carl Frampton. I know (Daniel) was an advisor. Michael Conlan is there. As Kieran says, Tyson Fury is there. So it’s gradually grown and it doesn’t make sense the size of the staff they have, the money they can throw at fighters and have been. And then plus the fact, why are they headquartered in Dubai? The supposed CEO Sandra Vaughan lives in Scotland. The original company was in Marbella, Spain. Is it just a complete fluke that they happen to open their headquarters down the road from Daniel Kinahan’s penthouse where he’s protected by ex-KGB guards.”

On what global boxing can do to keep criminal elements out.
Kieran Cunningham: “(It’s) absolutely key that an international governing body that is squeaky clean, that everybody believes will be fair and will look at things in a proper and a rigorous manner so that you could go to them with concerns about somebody like Daniel Kinahan being a key member of the sport. But you have to have a willingness within the sport for that to happen. I don’t see that willingness there at all. You know, I think too many people in boxing are just in it for the bottom line and Daniel Kinahan is good for their bottom line, so they don’t care.”

Ewan MacKenna: “I guess you see for me, I would say at this point boxing’s name is mud. That’s in my head looking at it from a moral perspective.  I mentioned you’re talking the UAE, Saudi Arabia, Daniel Kinahan, the Bahrainian Royal family. I mean, you’re talking really bad people. The reality is though, will this make any difference? Because what we’re seeing is Daniel Kinahan being legitimized by the likes of Bob Arum, Saudi Arabia being legitimized by the likes of Eddie Hearn, ESPN legitimizing MTK and almost rewarding them. If there’s that Joshua-Tyson Fury fight purses are going to be through the roof. It will be one of the most watched fights of all time. So I mean, despite all it’s doing wrong and despite crossing lines it should never even have gone near. (Boxing)’s being rewarded and doing very well. So I think that’s the grim truth. And it’s not just boxing, we’re seeing that in a lot of areas. But despite showing no morality and despite mixing with such terrible people, because the money is so good and the numbers are so good, it will be seen as a successful venture.”