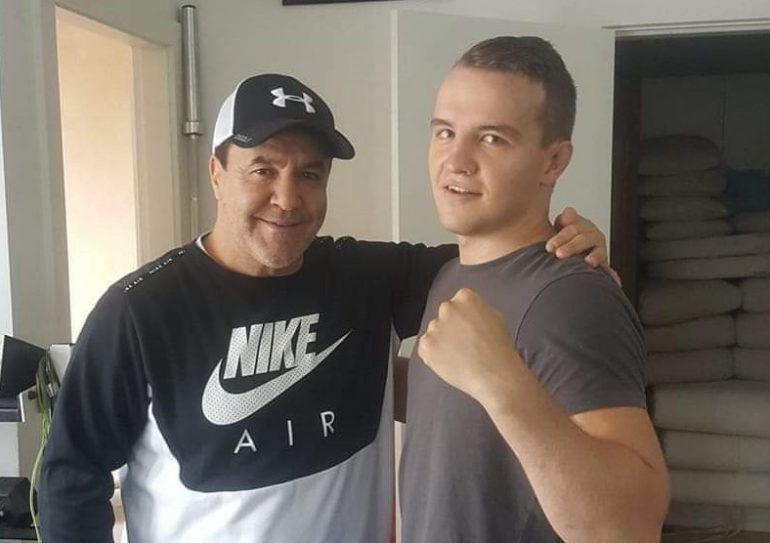 Stevenson with former world champion and trainer Jeff Fenech.
31
May
by Shaun Brown

A famous surname in boxing can do wonders for your career.

Doors open quicker, another zero or two gets added to your bank balance, and having a second name known to many might see you jump to near the front of the queue on fight cards. And all of this can be yours regardless of your abilities. Come on down if your name is right!

But what if you had to change your name to initially protect your career? What if having your original surname could potentially turn people away from your fights and brought back memories that some just want to forget. Terry Stevenson finds himself in that position.

His name won’t ring a bell with the hardcore element of the sport. Terry is a 28-year-old welterweight from New South Wales in Australia, trained by the legendary Jeff Fenech, and he’s amassed a record of 4-0 fighting in Mexico and Thailand. At some point this year he hopes to fight in his homeland, which he has done as a kickboxer, but never as a pro boxer. Stevenson might not have fears about making his boxing debut back home but there may be a nervous anticipation that will only disappear if the public see past his original birth name, because Terry Stevenson was born Terry Milat.

Those of a criminal fascination, an undoubted trend thanks to podcasts and documentaries, may instantly recognize the name Milat. Australians certainly will. Ivan Milat was convicted of a case known as the “Backpacker murders”, a spate of serial killings that took place in New South Wales between 1989 and 1993. He was convicted in 1996 and given seven life sentences. Ivan died in prison in 2019. Terry is Ivan’s nephew.

“It [the name Stevenson] was my mum’s family name,” Terry told The Ring during a recent phone interview about his name change.

“I got it changed when I went to America. When I stayed in hostels, I couldn’t be Terry Milat because there’s a lot of English [people] and stuff there, so that was actually the reason I got it changed. But I realize now, it doesn’t actually matter that much, but at the time it was very important. I changed it so . . . and then with what my cousin did as well…”

His cousin Matthew Milat is serving life in prison after killing David Auchterlonie in November 2010. Matthew returned to the scene of his uncle’s crimes to commit the horrific act.

Terry, as you might understand, is somewhat reluctant to discuss such matters. Go on Google and you can find out the whole story. However, this is a boxing feature telling Terry’s story so far and how having the name Milat has affected him.

“People knew me as a separate person but still, once they heard my name they would judge straight away because that’s what people do. So, for instance, once when I was fighting as a kickboxer in Australia, a promoter, I think he was drunk or something, announced me as Terry “The Murderer” Milat because I always fought kickboxing under Milat. To be honest, I was like whatever but the crowd were upset.” 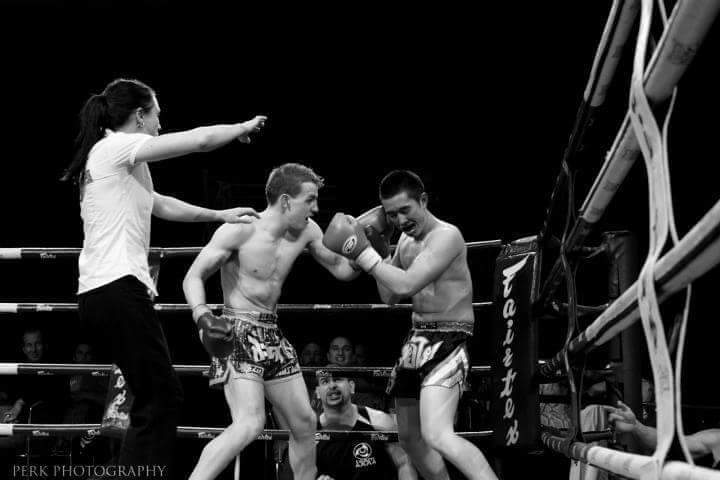 Stevenson in his Muay Thai days.

Terry has been a kickboxer and a Muay Thai fighter. He was always a “puncher” and sparring boxers during his time in other combat sports prompted the desire to become a boxer, but he wanted to skip a grade by bypassing the headgear and vest chapter to jump straight into the pro game.

As a five-year-old Terry found himself in karate classes, which is what drew him to combat sports. It wasn’t enough for him, however.

Alcohol played its part in Terry’s street fighting. There was a need to prove himself, too.

“It was a terrible experience,” he says of his time in ‘Juvy’. “I just knew that’s where I didn’t want to end [up] but, at the same time, I was still young, still had no direction and still didn’t know what I wanted to do. I hadn’t planned fighting yet.”

Terry really fell in love with boxing when he stayed at a Muay Thai gym in Thailand. There he would spend a lot of time with cult hero Wanheng Menayothin (the WBC strawweight titleholder).

“They were all about basics. They make fighting very simple,” he says.

The education continued in America, training at the Wild Card gym. Stevenson had been travelling in South America prior, taking in Peru and Colombia. Three months would be spent training at the renowned Wild Card, birth to many fighters of many levels. He would acquit himself well and his then trainer Justin Juuko encouraged him to pursue boxing. It was when he returned to Australia that Stevenson would begin working with Jeff Fenech after being put in contact by Juuko.

“After I got in contact with him, he started spending time with me on the pads. I gotta say that was some of the best pad work I ever had. Just teaching me things that actually matter. To actually sit on my punches. We didn’t train for long. We trained for like 40 minutes and it’d be good quality work. Another thing he changed with me, instead of the running I was doing, which was slow, he said you gotta run fast, pretty much as fast as you can. That’s one thing I’ve changed now. It’s all about how fast I run. It’s not just going out for a jog. He’s definitely changed my game so much and I can’t wait to fight again and show everyone.”

Terry didn’t know about the boxing exploits of Jeff Fenech prior to their hook up. The pupil has since spent time watching his trainer in action and brought up two of his fights from the 1980s that he particularly enjoys.

“I like the fight against Samart Payakaroon because Payakaroon was a Muay Thai fighter as well and what he [Fenech] done to him and then there’s another fight between him and Marcos Villasana which I really love. That’s a tough go-to-war fight.”

Chances are that if you ever get an opportunity to watch Terry fight, you’ll witness another “go-to-war” fighter. Pressure is his forte, and while Fenech is teaching him to box as well as attack, moving forward remains the favoured tactic.

Roman Mendez, Armando Gonzalez Solis, Surachet Tongmala and Songkran Manopprungroj have all been put under the pump and found themselves in the loss column, enabling Stevenson to move to 4-0 since June 2018. The names won’t move the needle, but the experiences could be priceless if Stevenson moves on to bigger and better things.

The pro career began in Tijuana, Mexico. The venue, not a word Terry uses to describe it, was called Cheers Bar. Maybe a local bar where everyone wants to know your name.

“That was crazy,” he recalls.

“Dodgy places, dodgy promoters, and if anyone has ever been to Tijuana, they’ll know how dangerous a place it is. Going there was crazy. I had to hire a car and take my trainer to Mexico. We went down there and actually got a recommendation of a hostel but it was so dodgy, it was nothing like I’d seen in Australia.”

“It looked like a bar,” he said of the Cheers establishment. “People get drunk there and stuff but it wasn’t . . . it certainly didn’t look like a venue. The ring was actually out the back of the bar and everyone was getting blind drunk. But I suppose everyone does that at fight shows but more so there.

“People come down from everywhere. I think there was someone from Mayweather’s Gym, a fair few other fighters from Wildcard attended, and quite a few local Mexicans come to watch. There were quite a few people there, but it certainly wasn’t a big show. A rough guess would be about 200 people, wouldn’t even be that much I’d say.”

Tijuana to America then back to Tijuana for his second fight six weeks after his debut. The Bar La Oficina wasn’t as crazy as Cheers. A bit more refined. A unanimous decision victory for Stevenson meant celebration time.

“After the first fight me and my Mexican friend went out to the bar as I love to after every fight. We celebrated, drinking, and we were at a dodgy nightclub somewhere and my friend was like, ‘We gotta go’ because there were people sitting down at the table with guns. And he made me go with him. I didn’t want to go because I was drunk.”

Things were more relaxed in Thailand for fights three and four. No big deal who loses and who wins. Not life and death as it is in some countries, or for some fans. Stevenson feels comfortable in Thailand, a place he has travelled to eight times. The people, the culture suits him, but it is now time to fight in Australia once the boxing world gets back to some sort of normality in the wake of the coronavirus pandemic.

Stevenson needs to get the ball rolling. Being 28 and having only had four fights presents him as a novice on record, but he’s at an age where many others are beyond him and are in their prime. As many fights as possible in 2020 is the plan, wherever Fenech can get him a spot on a show.

There was a time when Terry wouldn’t be hired for day jobs because of his previous surname. Plastering was his game, now fighting is.

Regardless of how far Terry Stevenson goes in professional boxing he hopes Australian fans will look at him as a fighter, as one of their own, one who they will get behind as they do so passionately for their other sportsmen and women. After all it’s about boxing, it’s not about a name.