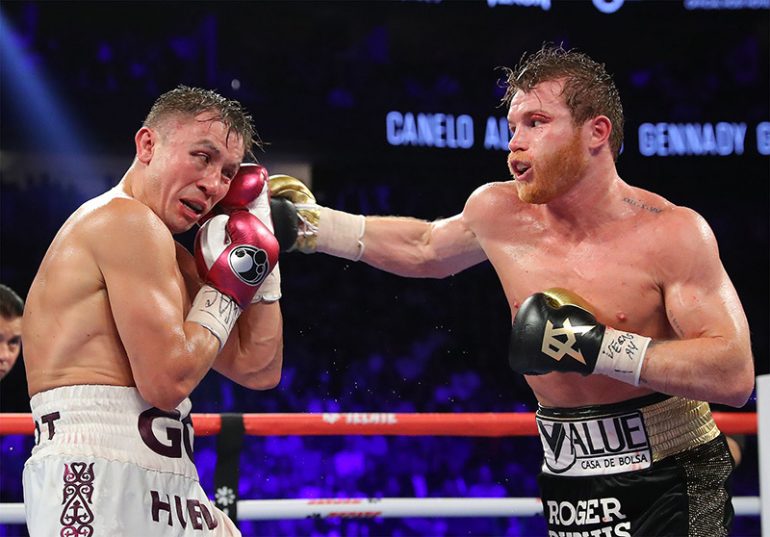 Photo by Tom Hogan
28
May
by Anson Wainwright

Up next is middleweight. As always, please enjoy the debate and respect other people’s opinions. 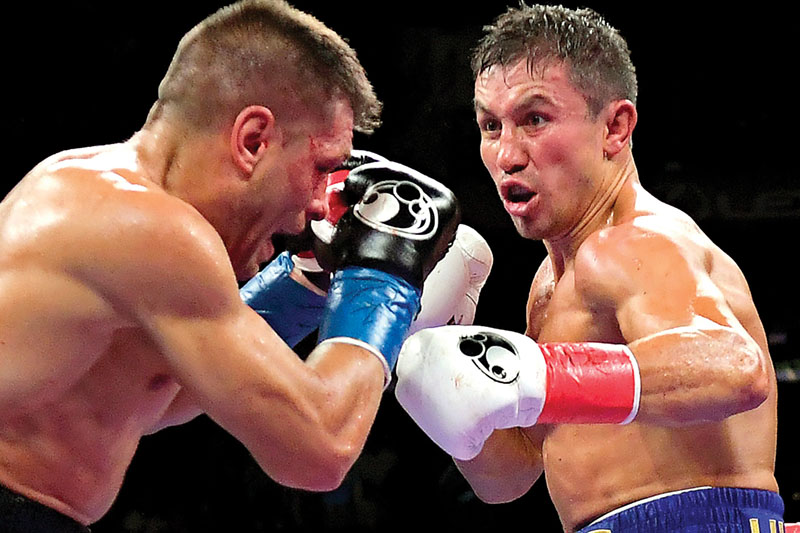 THE PAST: Golovkin unified IBF, WBA and WBC middleweight titles and defeated Daniel Geale (TKO 3), David Lemieux (TKO 8), Kell Brook (TKO 5) and Daniel Jacobs (UD 12). The only two blemishes on his record came courtesy of Canelo Alvarez (D 12 and L MD 12), however, most believe that GGG won the first fight and deserved no less than a draw in the rematch. Since then, Golovkin has bounced back to claim the vacant IBF title against Sergiy Derevyanchenko (UD 12).

THE FUTURE: Will face mandatory challenger Kamil Szeremeta, likely in Chicago, on a date to be determined. A third fight with Canelo Alvarez is a serious priority.

THE PAST: The former amateur standout has gone on to become a two-weight world titleholder as a professional. However, the cerebral southpaw is too dangerous for his own good and not exciting enough to entice rival titlists and big names. Andrade is the reigning WBO middleweight titleholder and holds wins over Vanes Martirosyan (SD 12), Willie Nelson (TKO 12) and Maciej Sulecki (UD 12).

THE FUTURE: Andrade has talked about fights with Canelo, Golovkin and Charlo but may have to settle for a mandatory assignment against Liam Williams. The latter may not happen due to travel restrictions. At 32, Andrade needs a big fight as soon as possible.

THE PAST: Charlo is a two-weight world titleholder. When motivated, this aggressive boxer-puncher has been highly impressive, beating Cornelius Bundrage (TKO 3), Julian Williams (TKO 5) and Hugo Centeno (KO 2). However, Charlo has also gone through the motions in bouts against Matt Korobov (UD 12) and Brandon Adams (UD 12).

THE FUTURE: The brash Texan has exchanged barbs with Andrade, but a fight with Chris Eubank Jr. has also been discussed. The latter seems more likely due to promotional allegiances. Either way, like Andrade, Charlo needs something career-defining.

THE PAST: Highly decorated amateur who has moved quickly since turning professional in 2014. The teak-tough Ukrainian has wins over Sam Soliman (TKO 2), Tureano Johnson (TKO 12) and Jack Culcay (UD 12). However, Derevyanchenko is 0-2 in world title fights, losing razor-thin decisions to Danel Jacobs (SD 12) and Gennadiy Golovkin (UD 12).

THE FUTURE: Having given Golovkin all he could handle and then some, nobody is going to be in a rush to face Derevyanchenko. Might have to stay busy and hope for another big opportunity. 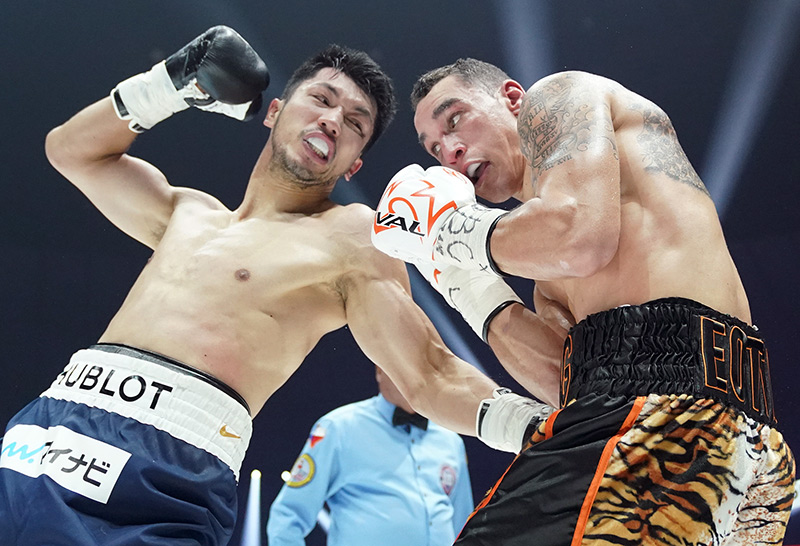 THE PAST: This amateur standout won silver at the 2011 World Championships and gold at the 2012 Olympics before turning professional. A superstar in Japan, he is physically strong and a big hitter, but he can be outboxed, as evidenced in his defeats to Hassan N’dam (SD 12) and Rob Brant (UD 12). To his immense credit, Murata stopped both men in direct rematches.

THE FUTURE: Had been in the mix to face Canelo. That is the long-term goal, but Murata may have to keep busy in the meantime. He could face Rob Brant in a rubber match.

THE PAST: Fought exclusively at home in Poland, besting capable former world title challenger Rafal Jackiewicz (UD 10), previously unbeaten Artem Karpets (RTD 5) and aged former world titleholder Kassim Ouma (UD 10). Eventually went on the road to Italy and stopped Alessandro Goddi (TKO 2) to win the European title. He has made two defenses while working his way up the rankings and is now the IBF mandatory challenger.

THE FUTURE: Waiting for the dust to settle before facing Golovkin.

THE PAST: Learned on the job as a pro before narrowly dropping a decision to the much more experienced Billy Joe Saunders (UD 12). Stepped up to 168 pounds and bested Arthur Abraham (UD 12) and Avni Yildirim (KO 3), before dropping a decision to George Groves (UD 12) in the WBSS. Bounced back with a win over James DeGale (UD 12) and has since dropped back down to 160 pounds.

THE FUTURE: Currenly training with Roy Jones Jr., and has one eye on WBC titleholder Jermall Charlo.

THE PAST: The 31-year-old Pole beat Hugo Centeno (TKO 10) and Jack Culcay (UD 10) before stepping up to the big league. He gave a good account of himself against Daniel Jacobs (L UD 12), then held on to beat old warhorse Gabriel Rosado (UD 10) to earn himself a shot at the WBO title. Andrade defeated Sulecki by shutout unanimous decision.

THE FUTURE: Needs to get back in the win column and work his way back into title contention. 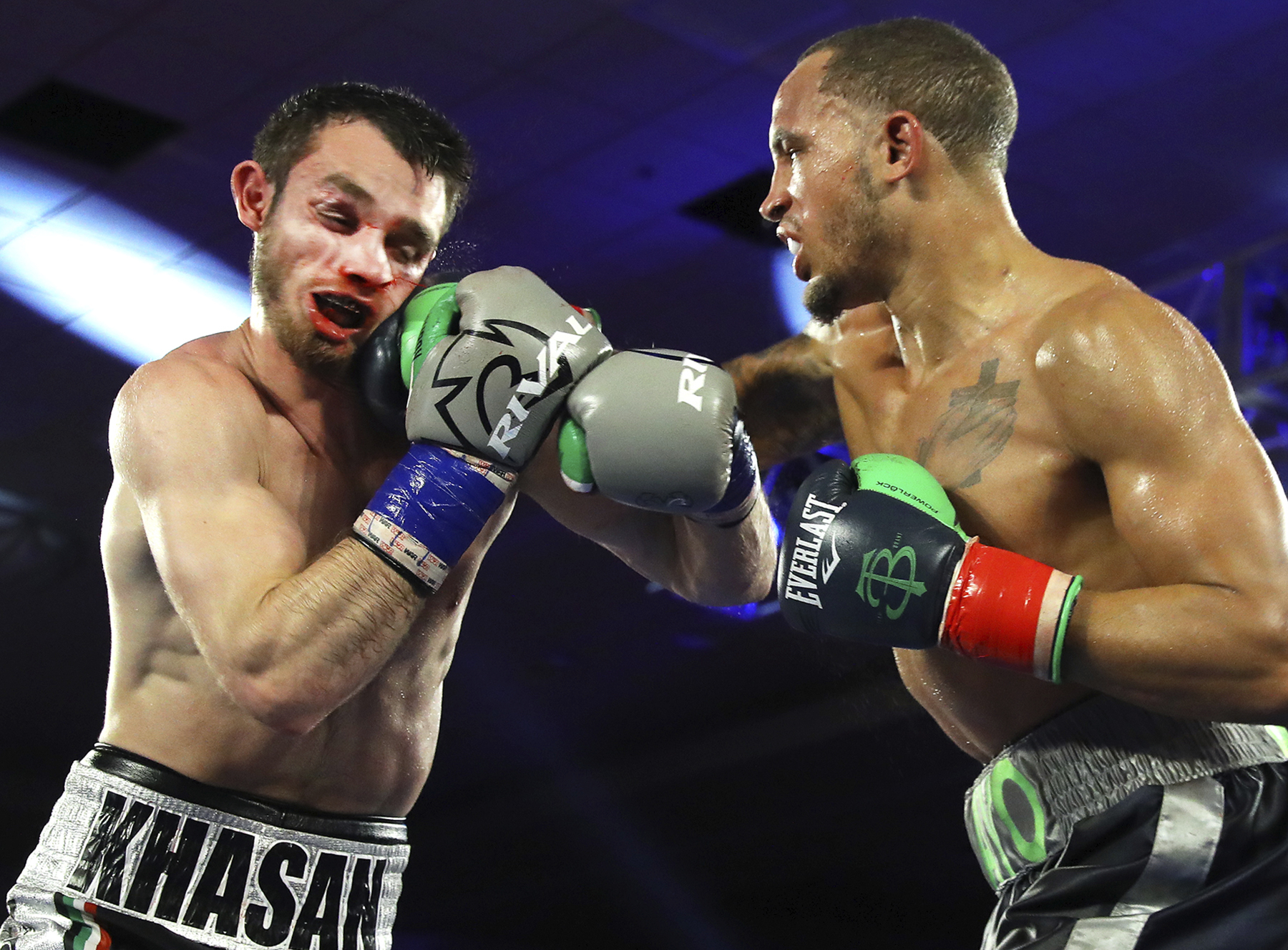 THE PAST: The Minnesota native worked his way up locally before taking part in the 168-pound WBSS. In his first bout, Brant was outpointed by Juergen Braehmer (UD 12) and, from there, made the decision to drop back down to middleweight. Shocked Murata on points but was stopped in the second round of a direct rematch.

THE FUTURE: Was due to return against Habib Ahmed on January 11 but tore his bicep. Now that he’s recovered, Brant will look for a confidence-booster before against taking aim at Murata.

THE PAST: The former British and Commonwealth junior middleweight champion lost his unbeaten record in controversial fashion to the more experienced Liam Smith (RTD (9) and dropped a decision in the rematch. Appears to have kicked things up a gear with six inside-the-distance victories, notably stopping the durable Karim Achour (TKO 2) before blitzing Alantez Fox (TKO 5).

THE FUTURE: Vehemently calling out Andrade for his title shot.