Diego Pacheco is tall trouble at 168 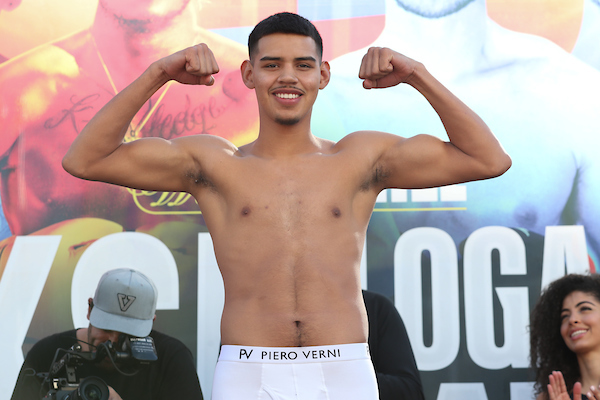 The furtive, sideways stares always followed his direction each time Diego Pacheco walked into a classroom for the first time. Maybe, some kids thought, that he may have failed a few grades. That might explain why the real tall kid was in their class.

Pacheco just happened to be tall for his age. He was the kid who always had to stand in the back of the line. He played varsity basketball his freshman year at

That’s because another sport was in the way—boxing.

And once the COVID-19 pandemic gets under control, Pacheco plans on making up for the time he’s missed in 2020.

“I always felt I used my height and my frame as my advantage in the ring, but I had some problems when I began,” recalled Pacheco, laughing.

The problem was no one believed he was 14 or 15. Sparring was a problem. Because Pacheco was taller than most teenagers his age, trainers never believed he was actually the same age as the kids he was supposed to spar.

“I always got put in with older kids, which was okay, because everyone who was my age was really small,” Pacheco said. “My dad wanted me to go in with older guys. It helped me. It forced me to gain experience at an early age.

“I used to get frustrated, because there was no one to fight. I was lucky I had Brandun Lee around. He’s a few years older than me and we would spar. Brandun has always been really good, and he really helped me out.”

Pacheco, who began boxing at 9, dropped basketball around 14. It wasn’t a hard choice.

“No, because I always liked boxing more than basketball,” Pacheco said. “I did more sparring than fighting, and that changed when I was 16.”

When he was ranked No. 1 in Mexico and the United States as a middleweight. He was too young for the 2016 Olympics, and still too young for 2020. He had just turned 17 and had plans on boxing for the Mexican Olympic boxing team. Pacheco didn’t like being away from home, which is a hardcore area of South Central rife with drugs and gangs.

At 17, Pacheco decided to turn pro, and was forced to begin his professional career in Mexico, because he didn’t meet the California age requirement. He’s fought eight times in the last 12 months.

“I was so used to being active, so when this pandemic hit, it hit me hard,” said Pacheco, who fought seven times within the 2019 calendar year. “For now, I’m working with my younger brother, Frederico, who’s 6-foot-6 and weighs 280 pounds.”

Trained by Rudy Garcia and signed with Eddie Hearns’ Matchroom Boxing USA, Pacheco was supposed to fight five times in 2020.

“I’m hoping to get at least three more fights in before the end of the year,” Pacheco said. “I still get my road work in and I have my brother to spar with, since no one wants to spar with him, because he’s so much bigger than everyone his age—like I was.”

Pacheco, who walks around at 178, said his aim to get back into the ring in July.

Making 168 has been easy. Since he’s 19 and his metabolism begins to slow, Pacheco knows making super middleweight will becoming increasingly difficult.

“My goal is to get a title at 168, then make a move to 175,” Pacheco said. “The plan is to get in one more six-rounder this year, and then start with eight-rounders and then a youth title. The timetable is pointing toward 2022.”

By then, more of the boxing world will be aware of him.

For now, the furtive sideways glances still haunt Pacheco, though for a different reason. They usually come from curious eyes seeking the fighter whose punches echo throughout the gym.