From the Archive: Larry Holmes versus the all-time greats 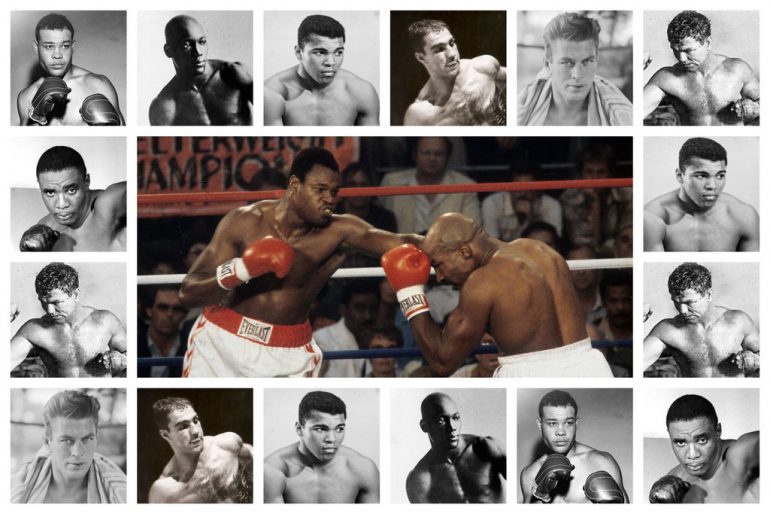 Editor’s Note: This feature originally appeared in the June 1985 issue of The Ring Magazine.

TRUE HISTORY DEMANDS PERSPECTIVE. Until now, Larry Holmes has been relegated to a shadowy land of heavyweight champions regarded as neither great nor not great by boxing historians. Sonny Liston has resided in that land for two decades. When pressed, fight experts will admit Liston’s greatness, shrugging their shoulders in a gesture of “Yeah, but . . .” The but is never explained.

So it is with Larry Holmes. For six years, fight fans’ major complaint about Holmes was that he was not Ali. Only very recently, especially after his last (?) fight with David Bey, have experts seriously acknowledged Larry as an all-time great.

Six heavyweight champions are generally considered to have been among “the greatest.” They are: Jack Johnson, Jack Dempsey, Gene Tunney. Joe Louis, Rocky Marciano, and Muhammad Ali. To this half dozen I have added the name Sonny Liston. Now add Larry Holmes.

To offer a fair, sober judgement on the merits of these fighters as compared to those of Holmes is never easy. Boxing is an emotional sport, especially where its fans are concerned. This is an honest attempt if nothing more.

Evaluating Jack Johnson as a fighter is always a challenge, especially since his fistic prowess has been somewhat relegated to the back seat due to the interest that has been shown in his private life vis-à-vis the “white establishment.” Johnson’s career must be viewed differently from that of Holmes for one basic reason. Jack made his greatest showings from about 1903-1910 – basically before he became champ. Larry did not become a great fighter until after he became champion. 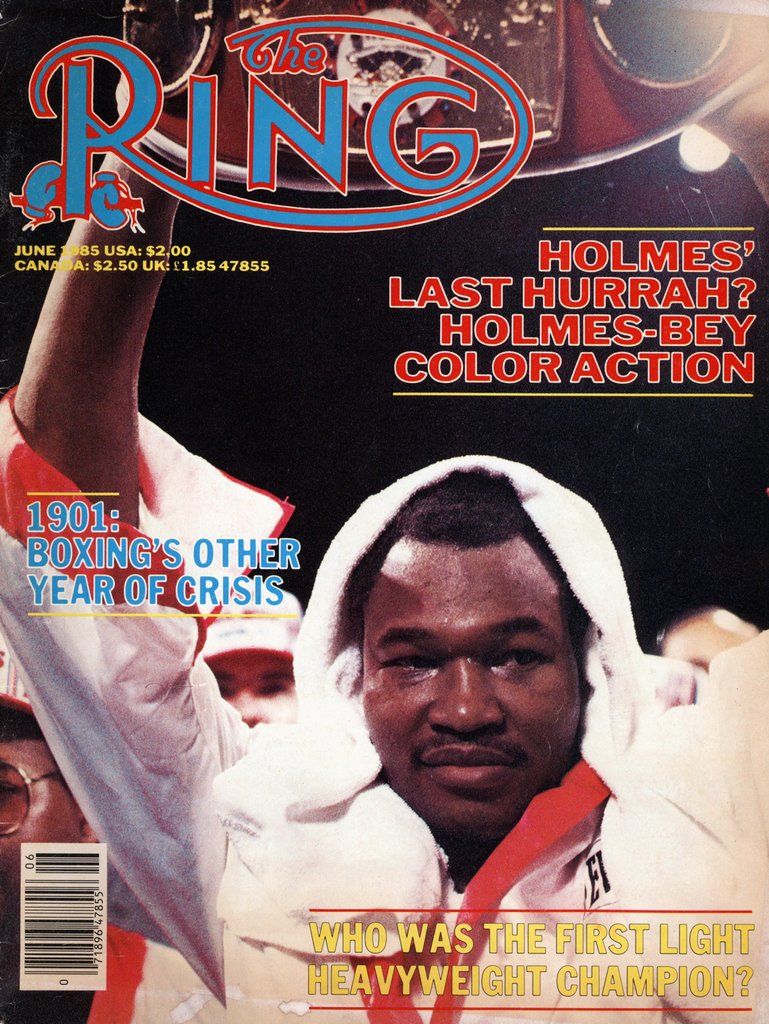 Johnson’s reputation is hurt by the poor form exhibited – on film as well as in contemporary accounts – by his white opponents. The 175-pound “Fireman” Jim Flynn is downright pathetic against Johnson in films of their July 4, 1912 fight. Jeffries looks like he would have given Tex Cobb a fair battle in the 1910 film of his fight with Johnson, but nothing more. Tommy Burns was a very good fighter, but any notion that a 5-foot-7 super middleweight (Burns weighed only 168 for Johnson) would be a serious threat to the heavyweight championship today would be laughed at in any saloon.

Johnson had a rather laid back style (“If you wouldn’t hurt Jack, he wouldn’t hurt you,” Jack Jeanette, a contemporary black 190-pounder, said.) He was a beautiful counterpuncher, a masterful feinter, and one of the great ring generals of all time, with a right uppercut that severely jolted heavyweights and knocked world middleweight king Stanley Ketchel cold. He beat the game Burns unmercifully, tortured Jeffries (Johnson could have kayoed Jeff any time after the fifth if he had pressed) and toyed with Flynn. Watching Jack fight is like watching a dull chess game, and you’re never sure what he could do in a fight with someone of nearly equal skill. (Willard simply wore down Johnson in their scheduled 45-rounder in 1915.)

The best way of assessing Johnson’s skill is probably by reading the accounts of his battles with men like Sam McVea in the early 1900s. He gave McVea a bad beating in both of their fights, chopped up a 156-pound Sam Langford badly over 15 rounds in Chelsea, Massachusetts, in 1906, and fought a few surprisingly even battles with Jeannette. Johnson, however, scored the only victory, aside from one fight won by Jeannette on a foul.

Holmes, on the other hand, was virtually sneered at until he won an upset unanimous decision over Earnie Shavers and clinched a shot at WBC champion Ken Norton. Prior to that, Larry was little more than a journeyman, struggling to outpoint Tom Prater in the U.S. championship tournament.

Holmes comes out ahead, however, if we compare title reigns. Larry successfully defended his crown 19 times against the best men the division had to offer. (He ducked no one outside of Greg Page.) Johnson virtually sat on his title – both because of governmental pressure and a cynical reluctance to defend against black fighters.

Stylistically, Holmes would probably have been too much for Johnson in a 15-round title bout. Jack’s defensive skills might have saved him from a knockout, and he might have jarred Larry with some counterpunches, but Holmes’ superior combos, speed, and size would probably have overwhelmed the Johnson of 1908.

Jack Dempsey was the target of tremendous criticism in the 1970s and early-80s. Critics derided his opponents – Georges Charpentier (a puffed-up middleweight), Luis Firpo (a crude slugger) and Jess Willard (an old man at 37 when he fought Manassa Jack.) Many have disparaged Jack’s pre-title record, too, but Dempsey absolutely ran through the heavyweight division in 1918 – blitzing opponents like Carl Morris, Arthur Pelkey, Gunboat Smith, and Fred Fulton. Fulton, kayoed in less than half a minute, was the No. 1 contender – a big (6-foot-4, 210-pound) man with a good left jab and – wonder of wonders – a good left uppercut!! Jack’s fast bobbing and weaving, combinations, and ferociously hard punching knocked Fred out in probably the quickest fight in history between top contenders.

Jack fought 21 times that year – scoring 17 kayoes, engaging in two “no decision” bouts with Billy Miske, and losing a four-round decision to Willie Meehan in a benefit bout held in San Francisco. Meehan, admittedly, had Dempsey’s number in four-round affairs. They met five times in all – two wins for Meehan, one for Dempsey, and two draws. (Kearns later said that one of the draws should have been called a win for Dempsey.) 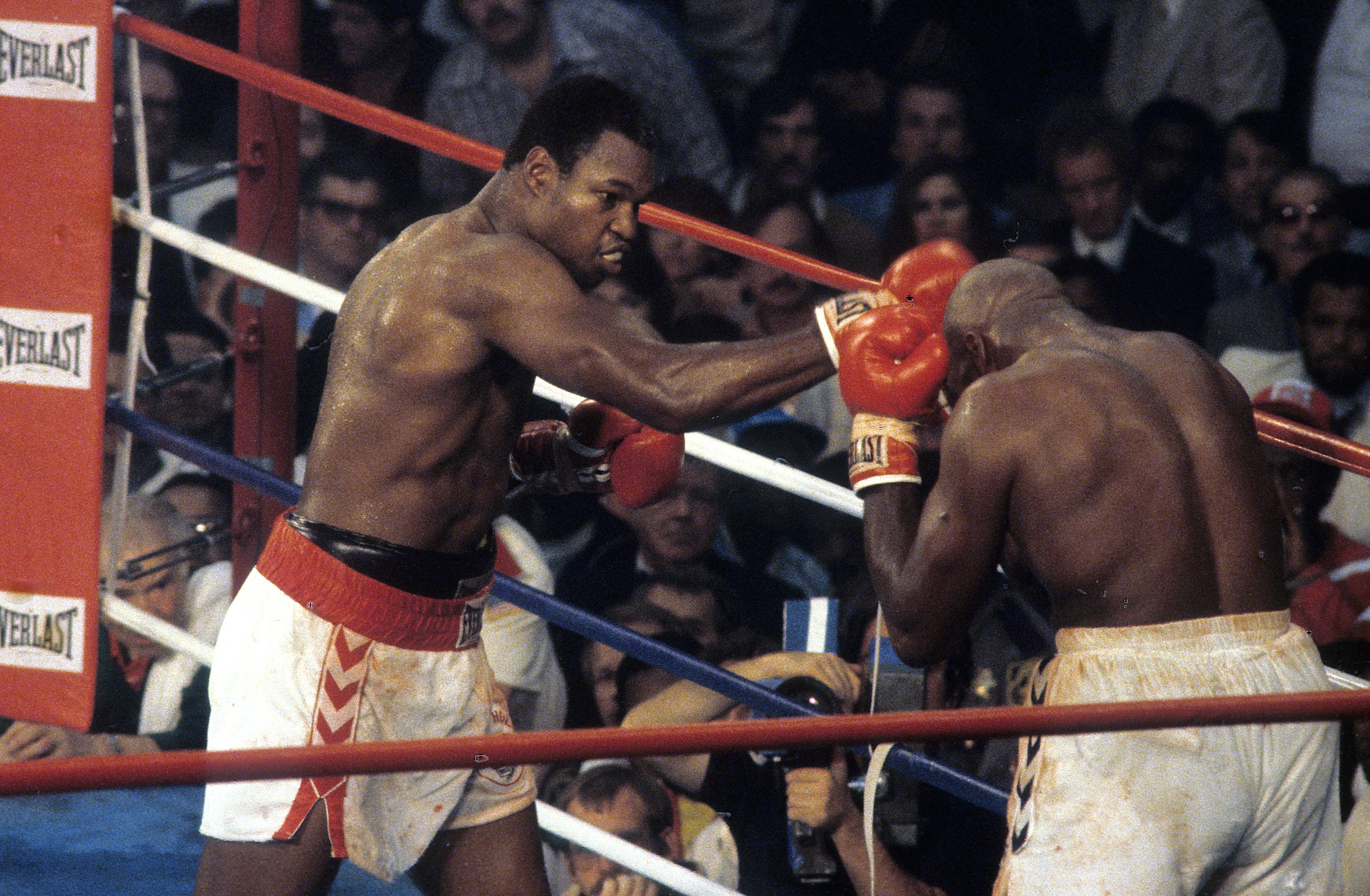 Holmes (left) punishes Shavers in their rematch. Photo by The Ring archive.

Kearns steered Jack clear of black fighters – a policy Tex Richard followed after Dempsey became champ. (Jack fought Anamas Campbell, Boston Bearcat, George Christian, and John Lester Johnson, among, possible, other blacks, before going under Kearns’ management in the summer of 1917.) As champion for seven years, Dempsey sat on his title for two years at one point (July 1921-July 1923) and three years (September 1923-September 1926) at another. Larry Holmes, by contrast, defended his title 19 times (against five defenses for Jack) in the same period.

Only Dempsey, Louis, and Liston decimated the heavyweight division en route to becoming champion, so Jack did have a better pre-title record than Larry. Had the two met in actual ring combat – what a fight!! – Larry would have been facing a fighter with the punch of Earnie Shavers, fast, hard combos, and a kamikaze attack. Dempsey’s size, 6-foot-1 and 190 pounds, would have been against him, but jack always specialized in destroying the big boys. Holmes, however, was a boxer – Jack always had trouble with them – and one with a jab the likes of which Dempsey never saw. An even money fight, with the edge going to Holmes.

Gene Tunney had a good, scientifically applied jab, but hardly a great one. He perfected his use of the right against Dempsey, whom he studied, long and hard, to beat. Gene’s pre-title record was almost perfect, with a 15-round decision loss to Harry Greb his only defeat. Tunney avenged that loss in four subsequent fights with Greb and was the only man to ever kayo Tommy Gibbons and Bartley Madden – one a fight boxer, the other a tough, durable opponent who stood up to Harry Wills for 15 rounds. Gene was a light heavy until 1925, and he actually went on a milk diet to build himself up to 190 pounds for Dempsey. Tunney retired after two title defenses, so any comparison of his championship reign with Holmes’ is out of the question.

Holmes, as has been said, was vulnerable to right hands. If Tunney were to land the right with force… who knows? The odds, however, are than Gene would have been kayoed by Round 12.

Holmes vs. Louis? Joe, like Larry, was a fighting champ – 25 defenses in 11 years, counting time out for military service during World War II. Louis’ pre-title record was, of course, superior to Larry’s; Joe almost decapitated every contender except Max Schmeling, and then kayoed Max in 2:04 in a championship contest. Again, however, Joe had trouble with the boxers – men like Bob Pastor and Billy Conn – and neither Bob nor Billy had Holmes’ jab, combinations, speed, and size. Edge to Larry Holmes again. 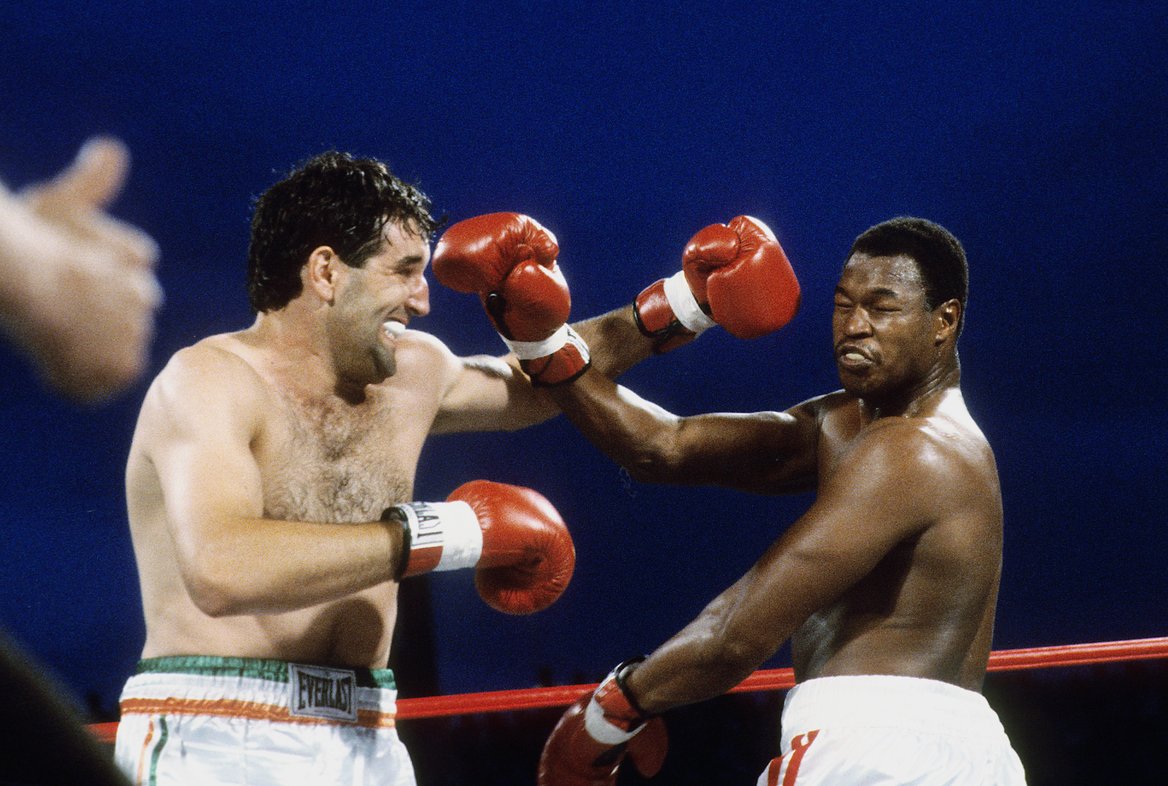 Now we come to a ferocious fight – Holmes vs. Sonny Liston. Liston was a cruelly brilliant fighter who could seemingly solve anybody’s style until he ran into Ali. His pre-title record was far superior to Larry’s, but Muhammad kept Sonny from having an appreciable reign as champion. A Holmes-Liston contest would have been sensational – Sonny’s long, slamming python left hook, quick two-punch combos, and murderous attack against Holmes’ jabbing, quick punching, speed, and combinations. Holmes has been found to be vulnerable to right hands, but the left was Sonny’s best weapon. (Then again, Liston could cross a man up with his right.) Holmes on points – if he manages to avoid a knockout.

How would Holmes have done against Ali in Muhammad’s prime – c. 1967? Muhammad’s foot speed was greater than Holmes’, and his jab, if not as punishing, was more consistently annoying. In a battle of left jabs, Ali’s superior reach and ability to take a punch would probably have seen him the victor on points. But, once again – what a fight!!

Is Larry Holmes an all-time great? Yes, yes, yes. He one of the top 10 – and probably top five – greatest fighters of all time. You could even make a good case for his being No. 1.

Holmes was not the most congenial, or the most colorful of heavyweight champions. But he was a great technical performer who got the job done efficiently. As such, he was a champion well suited to our times.