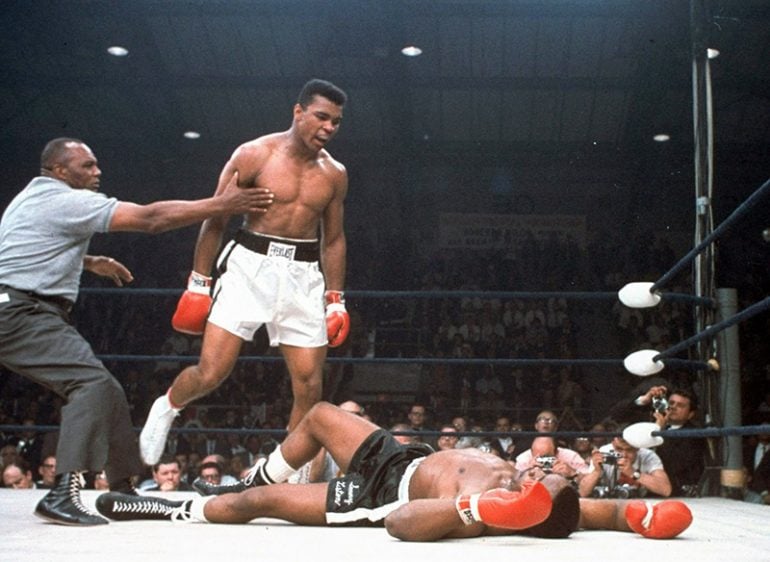 25
May
by Michael Marley 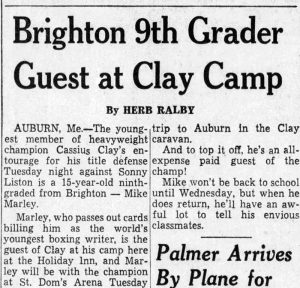 EDITOR’S NOTE: In one wild weekend, 14-year-old Michael Marley experienced one gigantic boxing thrill after another. Headlines in Boston newspapers certify that although he was a fistic freeloader, it made him an eyewitness to indelible ring history.

You could look into the 1965 newspaper archives as Marley, later to become a fight columnist for the New York Post, often does. Marley hereby recounts his epic experience.

I almost got stopped from attending the Sonny Liston-Muhammad Ali rematch, which the district attorney in Boston banned from his county because he sniffed the distinct odor of gangsters involved in the promotion (imagine that, mobsters in the fight racket, shocker!). This was the same DA who kept mum when an Ali hernia operation caused the bout to be postponed at the Boston Garden just three days ahead of the scheduled date.

So, the rematch bounced its way to a poverty stricken burg called Lewiston, Maine, where the locals were confused and bemused by the sudden influx of high and low rollers with flashy clothes, pricey cars and abundant jewelry. Did I mention that many of the visitors had dark skin? 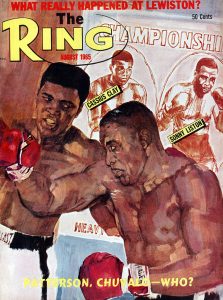 Ali, then 23 years old and not yet at the peak of his physical powers, told me to make my way past the potato fields to St. Dominic’s Arena, a battered and dingy ice rink really, and I would be, as befitting my self-promoted position as head of the International Cassius Clay Fan Club and publisher of a fanzine called The Louisville Lip, admitted with his entourage, no ticket required.

(Emotions ran high, rumors flew that an uninvited hit squad of revenge minded Malcolm X adherents were streaming to the site, this just three months after Nation Of Islam killers riddled the estranged Malcolm with bullets in Harlem. Suffice to say purses, bags and other property was searched in what had to be another heavyweight title bout first.)

So Ali was clearly my hero but I was almost stranded at the champ’s training hotel, the Schine Inn in Chicopee, Mass., due to the interference and authority of great trainer Angelo Dundee, later to become a treasured friend and news source for me as a journalist.

Being a responsible adult, Angelo said it was “too dangerous” given the Malcolm retribution rumors for an unchaperoned kid to be where flying bullets might be mixed in with airborne punches.

So Ali’s cherry red school bus, loaded to the gills, headed for Maine and I at in the hotel lobby in tears.

Then a provocative pimp named Diamond Jim Riley from Detroit noticed me and asked why I was so upset.

(Diamond Jim had a half carat diamond implanted in one of tooth, hence the nickname. His motto was “All I do is rest and dress, read the funnies and count my motherloving moneys.” Some years later, he was murdered in Los Angeles.)

Anyway I rode with Riley’s “ladies” in his Eldorado, we got to Maine and he had a persuasive chat with Mr. Dundee and that drama ended. 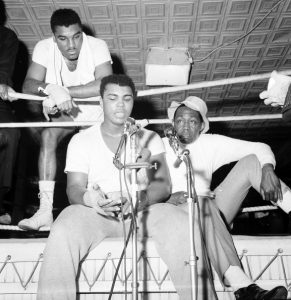 Legendary vaudevillian, comedian, and film actor Stepin Fetchit was among Ali’s entourage in 1965. (Photo by: The Ring Magazine via Getty Images)

On the Sunday before the Tuesday rematch, Angelo, myself and oldtime movie star Stepin Fetchit went to Sunday Mass together.

Word from the Liston camp in Poland Spring was all negative.

Liston had bursitis…again. Amos “Big Train” Lincoln and others were tagging him like a pinata in sparring sessions.

Worst of all, former thug/jailbird Sonny, probably in his mid-40s in real age, was “scared shitless” of the persistent Malcolm revenge rumors and thus he hoped to spend as little time as possible in the ring or other close proximity to Ali.