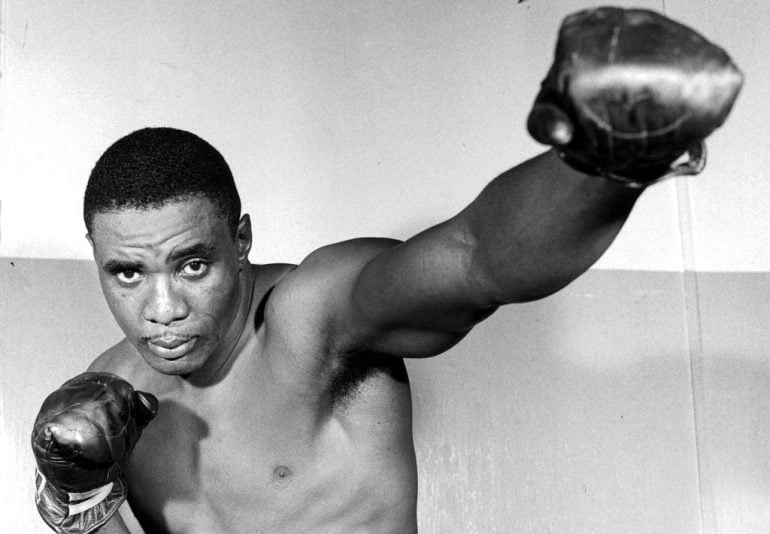 Sonny Liston. Photo from The Ring archive.
25
May
by The Ring

Editor’s Note: The following feature appeared in the April 1985 issue of The Ring Magazine.

But there was more to Liston’s aura of invincibility than just his thoroughly convincing record. Part of it was the way he totally demolished his opponents – usually within three rounds. Another part of it was just his visage. Liston looked mean, he talked mean, and he acted mean. His entire aura was that of what one sportswriter called “the meanest animal in the jungle.” His presence, his awesome fighting ability, and his undeniable background all combined to make him an archetype – the quintessential mugger that the average, law-abiding citizen of the early 1960s dreaded meeting some night in an alley.

Liston’s early life, his long prison record, the prison chaplain who got him in to boxing, and the various nefarious characters who managed, booked or otherwise handled his career, are subjects for a book or a very long magazine story. And the mysteries that cloud his later years – the two Ali fights as well as Sonny’s bizarre death – would make a fine piece for a top notch investigative reporter. The remainder of this column, however, will deal only with Sonny’s early boxing career – the rise of the most awesome heavyweight the ring has yet produced. 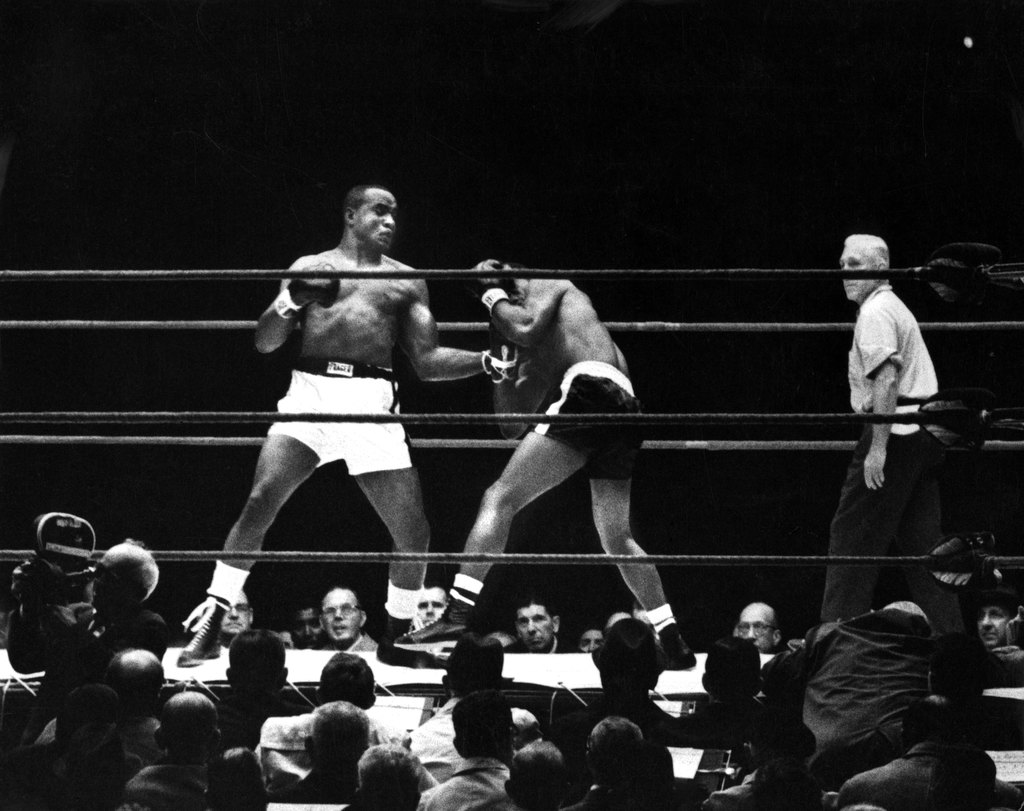 Sonny Liston (left) launching bombs at Floyd Patterson in their first fight in 1962. Photo from The Ring archive

The true year of Liston’s birth has always been disputed. (In 1966, he silenced a reporter by declaring that “My mammy say’s I’m 34 years old. You calling her a f_____ liar?”) At the beginning of his pro career, his birthdate was listed as May 8, 1934. This was subsequently revised to May 8, 1932, a figure that still failed to satisfy inquiring reporters who knew Sonny had a daughter born in 1948. Sonny, however, may well have fathered a child at the age of 14. At that age, he was a man in almost every other respect. (He always had trouble reading and writing, but those gentlemanly arts were not part of the bread-and-butter world of Liston.)

Sonny emerged from one of several trips to prison in 1952 and won the St. Louis, Missouri, and National Golden Gloves heavyweight titles in quick order. He made his pro debut at the Arena in St. Louis, in a scheduled four-round bout against Don Smith on the undercard of the Randy Sandy-Ernie Durando/ Pappy Gault-Teddy Roberts program on September 2, 1953. Bus Burke of The Ring filed the following report.

“In a four-round fight which was watched closely by St. Louisians, Sonny Liston, a National Golden Glove champion, weighing 200 ½ , and whose home is in St. Louis, punched out a fast 33-second knockout over Don Smith, 179, of Louisville, Kentucky. Smith had shown twice here in St. Louis in the past and had two one-round knockouts for his efforts. Against Liston, Smith apparently did not have a chance, as Liston swarmed all over him. When referee Jimmy Parker halted the slaughter with Smith practically out on his feet, it was discovered that Smith also was sporting a badly lacerated right eye.”

Sonny, surprisingly, scored only one more knockouts in the next eight fights. He outweighed all of his opponents (No fight card held in any major city would dare pair a light heavyweight like Smith against a man of Liston’s size today) except Ponce DeLeon, a 215-pounder, Martin Lee, Stan Howlett, and Neil Welch. Liston even lost a fight along the way – an eight-round verdict to 180 ½ – pound ring clown Marty Marshall, who used lateral movement to good effect against Liston in Detroit on September 7, 1954.

Liston showed improvement after that, winning all of his next seven contests while scoring five knockouts, including a six-round TKO over Marshall in a return bout. But in 1956, following another triumph over Marshall, Sonny ran afoul of the law again and went to prison. Released after a year, he made his return to the ring against Bill Hunter in Chicago Stadium on January 29, 1958, knocking out his lighter (210-193) opponent in the second round. Another knockout, over Ben Wise in the fourth frame of a scheduled eight-round contest, led to a 10-rounder with Bert Whitehurst, Sonny’s first important contest. Liston did not stop Whitehurst but looked impressive en route to a unanimous decision victory. Another scheduled 10-frame bout saw Julio Mederos unable to answer the bell for Round 3, and Liston was on his way. A devastating first-round TKO over Wayne Bethea made Sonny a contender in his next fight. 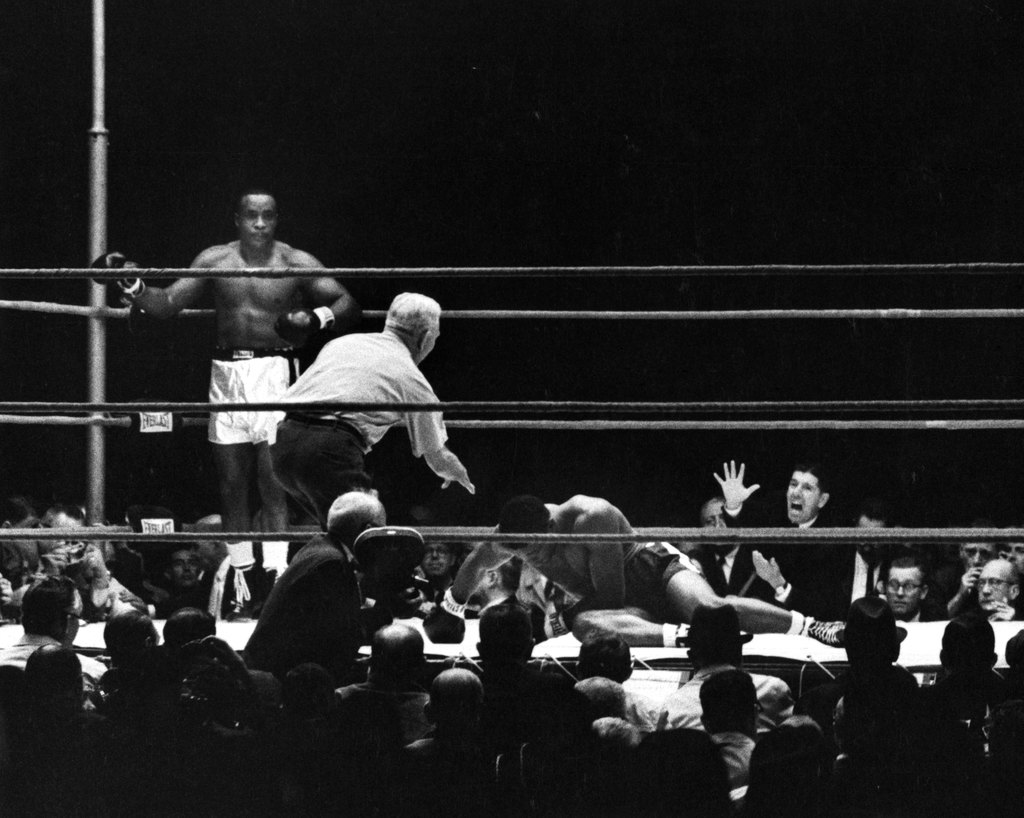 The Liston of 1958-1963 was a truly devastating fighter, one of the five greatest heavyweights of all-time. A first-round knockout over Frankie Daniels followed the Bethea massacre. Bert Whitehurst again managed to last the 10-round distance with Liston in a return bout at the St. Louis Arena, but Sonny went on to score knockouts in his next nine contests. Among his victims were such standouts as Cleveland Williams, Nino Valdes, and Zora Folley.

Eddie Machen fought a smart and fearless 12-round “prison” type of fight against Sonny in Seattle on September 7, 1960 – stomping on his toes and using every in-and-out trick in the book. Liston was almost frothing at the mouth, but Machen went the distance, and scoring was not quite as one-sided as some writers have maintained.

On December 4, 1961, Sonny knocked out Germany’s Albert Westphal in 1:58 of the first round in Philadelphia’s Convention Hall as part of a closed circuit doubleheader with the Floyd Patterson-Tom McNeeley title bout in Toronto. President John F. Kennedy, watching both bouts, remarked that “it would have been a better fight if Liston had fought Patterson.” Floyd took that as a cue to manager Cus D’Amato’s objections to Sonny as a titular opponent. Patterson defended against Liston in Comiskey Park, Chicago, on September 25, 1962, and the rest is history.

. . . Or it would be history, if boxing “historians” would stop sweeping the legacy of Sonny Liston under the ring canvas. Sonny Liston existed, and, Ali bouts or no Ali bouts, he was one of the greatest fighters to ever lace on a glove.

Let’s stop trying to deny it.