Omar Juarez is doing extraordinary charity work during the pandemic 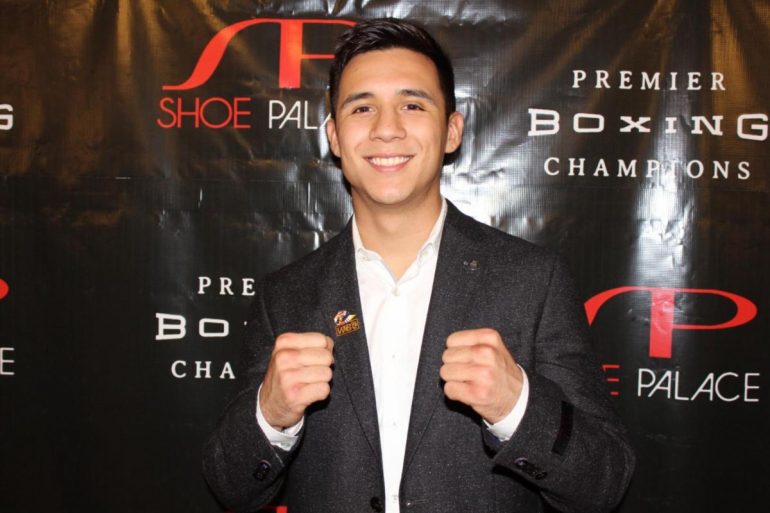 23
May
by Joseph Santoliquito

Despite the warnings and social distancing mandates across the United States, many will still fire up their grills with family and friends, go to the beach, and ignore the parameters in place for the COVID-19 pandemic during the Memorial Day weekend holiday.

While others are enjoying themselves in the sun, Omar Juarez will be wearing a facemask and giving out bags of food and household items to those in dire need in his hometown of Brownsville, Texas, which is at the ultimate southern tip of the state.

The 20-year-old had a fight scheduled for May 9 in San Antonio, Texas. Like the rest of the world, the undefeated junior welterweight had to put his life and career on pause once the COVID-19 pandemic began sweeping the country.

Juarez, however, has vowed to make a difference in the COVID-19 society in which we live. And each weekend for the last two months—he has.

In March, once Juarez (7-0, 4 knockouts) saw on social media that family around him were struggling to eat, so he decided to do something. He gave away fruits, vegetables and toilet paper on Fridays and Saturdays from 8 a.m. to 4 p.m.

Omar Juarez started his own giveaway during the COVID-19 pandemic.

It’s happened and will continues to happen on every Friday and Saturday in April, May and June.

“My team and I got together and we decided we had to do something, especially after I saw my family struggling every day,” Juarez said. “I think my attitude comes from my parents. They raised me in a perfect way, always keeping in mind to help others, and remembering people who have helped me when I was nothing.

“Where I used to train there was only one heavybag. We used to spar in the streets. I didn’t start in a five-star gym. I started on my own, and I always thought that regardless of how far I get in my career, I’m always going to have the attitude to help out. When I saw people hurting, with everyone running out of stuff, I wanted to do something.”

Juarez is actually there in line, giving bags out to those that need help. He’s up at around 6 in the morning to gather the supplies at a staging area to bring them to the designated drop-off area at the Brownsville Library.

Cars line up and Juarez is there to greet them and hand them their goods.

The turnout has been solid. 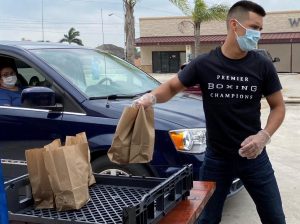 Omar Juarez has been getting up around 6 on weekend mornings to make sure all of the supplies are organized for the giveaway.

As for boxing, Juarez is trying to stay in shape. No one in the sports world knows when things will start returning to normal, and boxing is in the same boat. He would like to fight two or three more times before the end of the year.

After beginning 2020 with his first eight-rounder, a unanimous-decision victory over veteran Angel Martinez Hernandez on February 1, Juarez was looking to fight eight times this year. When the pandemic hit, that changed everything.

He’s 20 and has plenty time ahead of him.

He’s in a great spot, with strong management, co-managed by Bob Santos and Luis DeCubas Jr., and falls under the PBC promotional banner.

“I learned a lot from the Hernandez fight; it was my first eight-rounder and I’ve been studying that fight, because to-date, it was my toughest fight,” Juarez said. “It was a really good experience. He was a very dirty fighter, using his elbows and stuff I never encountered before.”

Hernandez tried to rough up the pup Juarez, but it was 20-year-old who easily prevailed.

“If I can get maybe three fights, that would be awesome,” Juarez said. “I’m honestly not thinking too far ahead. I haven’t displayed all my skills yet. I’m still a prospect who’s learning.”

Juarez said he wants to continue his giveaways until at least June.

“Omar is a fantastic kid, and what he’s doing is a part of him,” Santos said. “His perspective is far beyond that of a 20-year-old. He stayed out with me here in California for a couple of days, and my wife said to me, ‘Geez, the way he behaves and acts, it’s like he’s 40.’

“None of what Omar is doing surprises me. He’s one of the highest character moral people I’ve ever been around. His list goes on and on, with his public speaking to at-risk kids, to the ‘Light-the-night’ program he did for special-needs kids, it’s why I say Omar’s character is second to none. The list goes on and on.