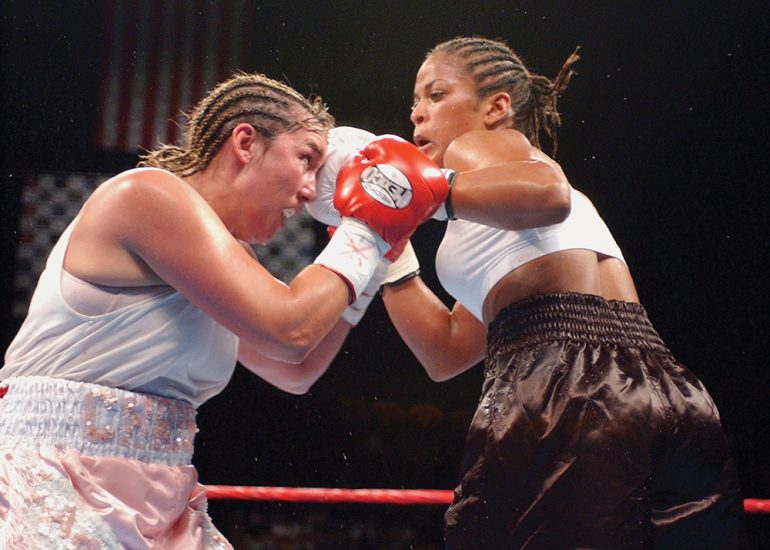 In her 16th pro fight, Ali knocked out women’s boxing trailblazer Christy Martin in the fourth round. (Photo by Chris Graythen/Getty Images)
22
May
by Ryan Songalia

Christy Salters Martin isn’t convinced that a fight between Claressa Shields and Laila Ali will materialize. There’s not enough money to be generated, she figures, to convince Ali to end her 13-year retirement to face the three-division champion Shields.

But if it happened, even in 2020, Martin is convinced that Muhammad Ali’s daughter would emerge victorious, despite the 25-year-old Shields being 17 years her junior.

“I think Laila smokes her. It takes her now six or seven rounds whereas back when she fought me it would probably take her the same amount of time that she got rid of me. At least that fast, if not faster,” said the 2020 International Boxing Hall of Fame inductee Martin, referring to the 2004 fight where Ali knocked her out in four rounds.

Martin, who became the original crossover star of women’s boxing during the ’90s through appearances on Mike Tyson’s post-prison undercards, criticized the 10-0 (2 knockouts) Shields’ low knockout percentage, and said “she can’t fight going backwards.” Still, Martin says she would support the two-time Olympic gold medalist if she had a different attitude.

“I think Claressa is very full of herself,” said Martin. “Why somebody doesn’t talk to her and say ‘look, say some positive things once in awhile, be a little nicer.’ A quote from her was, boxing doesn’t deserve her, are you freaking kidding me? Like she’s gonna go to the UFC, good, go over there, they’re gonna smoke your ass over there,” said Martin.

“I talked a lot of shit when I was in my career, but a lot of times I said it with a smile and then I’d follow it up with something funny. I tried to not be a hard ass all the time. She just wants to be a tough guy.”

In a Twitter direct message, Shields responded, “Personally [I don’t care] what a hater has to say about me,” adding that she had been friendly towards Martin until Martin criticized her on Facebook for calling herself the “GWOAT.”

“Truth be told we all know Martin boxed against strippers and ball room dancers to sky rocket her career. So she can’t say ant thing about me as I’ve earned my stripes the hard way,” said Shields.

As far as who she believes is the best female fighter in boxing right now, Martin considers Ireland’s Katie Taylor, the undisputed lightweight champion, to be the most well-rounded.

“Even though Katie Taylor’s been in a lot of close, controversial fights, maybe she’s the most solid skilled fighter. She’s in a weight class where there are other very skilled competitive fighters, much like in the ‘90s when between 135 and 147 there was a shitload of really good women’s fighters. That’s kind of where she is right now,” said Martin.

“She’s there where there’s more talent that will push her which in the long run will make her better. I know there’s still a lot of controversy about [the Delfine Persoon fight] in The Garden. It was very close but I think she’s solid. I like her.”