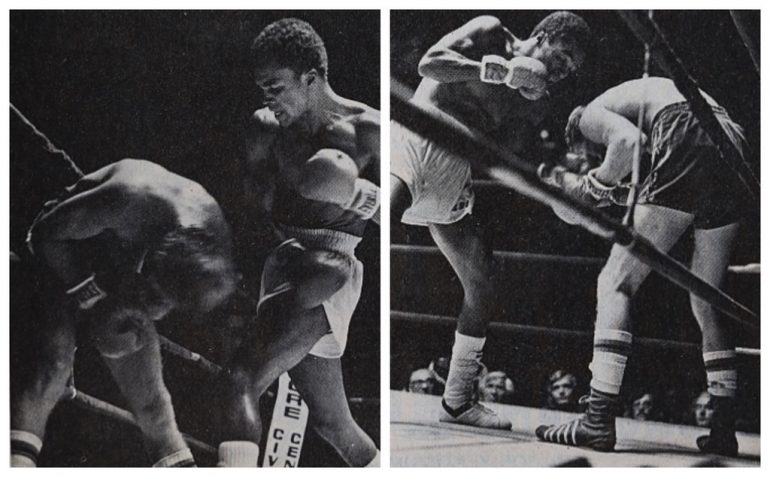 Editor’s Note: This feature originally appeared in the January 1979 issue of The Ring Magazine. Despite being televised, the Leonard-Shields fight remains unavailable to this day, in whole or in part.

WASHINGTON D.C. – Behind all the publicity and hoopla of top-flight professional boxing exists a world the public seldom sees, one whose operations are generally regarded as a supreme mystery.

So it goes with the Alis and Durans, and boxing’s lesser lights as well. Recently, The Ring investigated the camp of the National Capital Area’s hottest welterweight prospect, Sugar Ray Leonard of suburban Largo, Maryland, to throw more light on boxing’s “inside” scene.

When The Ring arrived at Leonard’s Oakcrest Recreation Center headquarters, the 1976 Olympic gold medalist had just scored his most important career win on September 9, 1978 when he TKOd tricky Floyd Mayweather, the No. 5 world welterweight according to The Ring, in 10 rounds at Providence, Rhode Island. Following the Mayweather bout, the 22-year-old Leonard suddenly found himself in the enviable position of achieving a No. 8 ranking among world welterweights by The Ring.

On the heels of this good news, however, came the announcement of an important bout . . . Sugar Ray Leonard would fight No. 4 welterweight Randy Shields. Ironically, Shields was the last man to defeat Ray, turning the trick via decision on May 5, 1973 in a National A.A.U. championship lightweight bout.

In personal styles and experience, Leonard and Shields presented striking contrasts. Sugar Ray exhibited a classically built, smooth muscled, 5-foot-9 ½, 147-pound body, had fought 150 amateur bouts (145-5, 75 KOs) and was now 14-0 as a professional. Randy Shields, on the other hand, was the archetypal California “Golden Boy” – 5-foot-11, 143 pounds, possessor of blonde good looks, 88-4 as an amateur including 67 KOs and boasted an extensive professional record of 31-4-1, which included bouts against such “iron men” as Vicente Saldivar, Pete Ranzany and, most recently, former junior welterweight champion Wilfredo Benitez.

The stage as set for an epic fistic clash between the Olympic gold medalist who had literally put his predominantly black neighborhood of Palmer Park, Maryland on the map, and Californian Shields. 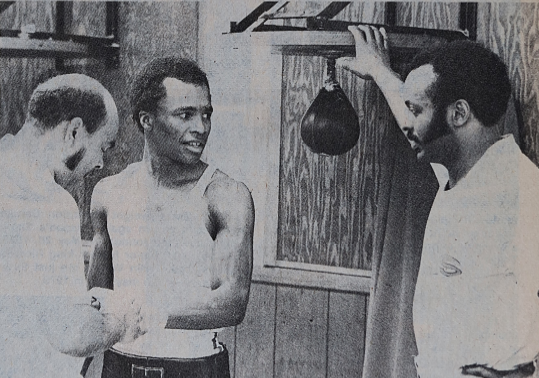 SERIOUS training for the Shields fight began on a sunny, warm Monday afternoon, September 25. Except for some light roadwork, Ray had been out of the gym enjoying a well-earned rest since the Mayweather fight.

The Oakcrest Gym is run by the local county and is located at 5200 Marlboro Pike, a long ribbon highway proceeding east out of the District and dotted with fast-food restaurants, commercial establishments and residences. The gym itself is located in a large, concrete finished building which was once a popular nightclub in early post-World War II days. In the last half-dozen years, hundreds of amateurs and several professionals have trained here, making it the closest gym in the area to once-famed Stillman’s.

A fair crowd of onlookers, friends and handlers are on hand when Sugar Ray enters around 12:30 p.m., neatly attired in white slacks and a tan bomber jacket. The gym itself is well-lit, shaped in a long L and dominated by a large training ring in the center. The wood-paneled walls are dotted with old fight posters and speed bag racks.

Soon Ray is dressed and ready for work, attired in a plain red robe, blue t-shirt and dark blue shorts. Under the watchful eye of trainer Dave Jacobs, Ray begins with short sessions of sit-ups, knee bends and jumping jacks. Jacobs then wraps his hands using large pieces of sponge to protect the knuckles. Ray performs four rounds of shadow boxing in front of the large full-length mirrors located in one corner of the room, and then does an equal stint on the heavy bag. The mood is relaxed as handler Janks Morton and Jacobs crack jokes, but the fighter is intense, finishing each round with a flurry of power punches.

Morton then towels off Ray, and the fight spends another round shaking out before moving to the exercise table where he does another two sets of 10 sit-ups, his torso hanging over the edge. It is obviously tough work and the medicine ball session which follows also takes its toll.

Soon Sugar Ray is back in his robe and ready to talk to The Ring, while an attractive female reporter waits her turn in the background. “I was a little tight today, but it’s no problem,” said Ray. “I’m always in shape.”

Asked if he felt pressure from the upcoming Shields fight, Ray was a veritable ice man. “I don’t feel anything right now. I’m just going to do a job – but I never underestimate an opponent.”

Ray said that the professional program was a considerable jump from the amateurs, but one that he thoroughly enjoyed. “I feel like I did it on my own, but you need a couple of close friends to motivate you,” said Ray. “Otherwise it’s an independent sport and it all depends on you.” Ray immediately added that his immediate circle of attorney Mike Trainer, Angelo Dundee, Jacobs and his Dad, Cicero, were the key figures in his rise to fame.

Now living in an apartment in Largo, near the Capital Centre, Ray has maintained a modest lifestyle, although he recently made an exception by splurging on a beige 1979 Lincoln. “Success has a tendency to spoil people, but not me,” said Ray. “It comes and goes so quick. My main thing now is to take care of my Mom and Dad before I do my thing.”

Training continues through the week at Oakcrest with Jacobs putting Sugar Ray through six arduous five-minute rounds each day with sparring partners Henry Bunch and Keith Broom. By Monday morning before the fight, the Olympic gold medalist was rounding into fine condition. Fight headquarters were then moved to Baltimore Civic Center, where Ray worked out each day at noon, after completing five miles of roadwork in nearby Druid Hill Park. 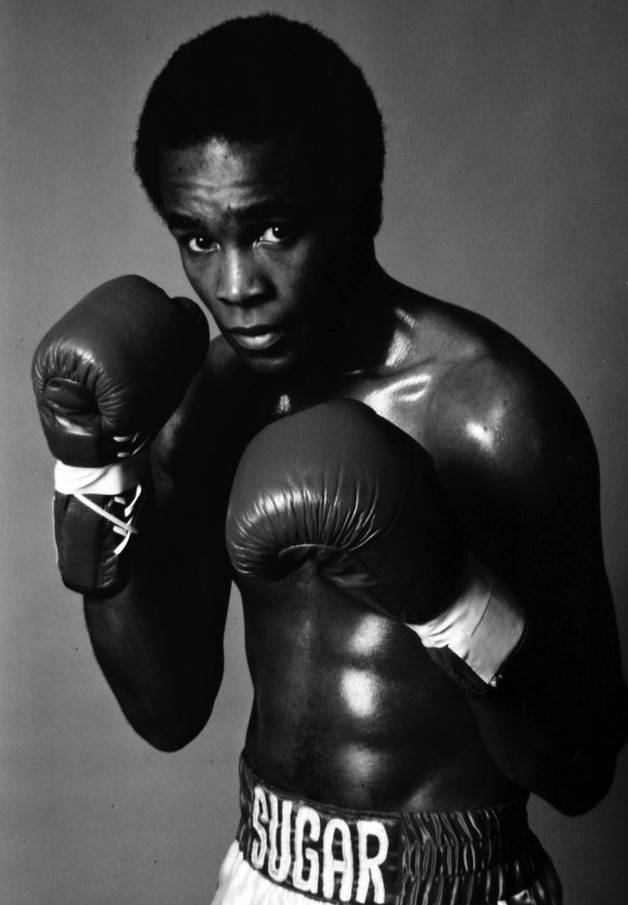 Shortly before 10 p.m. the principles appeared – Shields attired in green plush robe and trunks, with little fanfare – and Ray dressed in red plush robe dotted with stars and white trunks, while strains of the Olympic theme blasted through the auditorium.

The bout started off fast and remained that way through 10 blistering rounds. In the first round, the taller Shields stayed outside, demonstrating a remarkable pair of quick hands as he frustrated Ray’s efforts. Round 2 was a good one for Ray as he managed to avoid Shields’ snaky jab and landed two big rights. In Round 3, Shields suddenly changed tactics, bulling Ray to the ropes and scoring well. Shields won the round but suffered a cut near the left eye when the pair accidentally butted.

Heeding the pleas of Angelo Dundee, ray backed off Shields, danced and rushed, and landed powerful left-right combinations to Shields’ head. Leonard, learning fast, repeated the maneuvers in the succeeding rounds, and refused to be suckered by the more sophisticated Shields.

In the late rounds, the crowd was whipped into a raging fury as they cheered Sugar Ray down the stretch. Both Ray and Randy responded with stepped-up performances. Action was so hot in fact that in the ninth round when referee Tom Kelly broke a clinch, he was accidentally hammered by a Sugar Ray left hook. Ray immediately apologized and the bout continued, although Harry Cecchini filled in for Kelly in the final round.

While both battlers received a standing ovation for their performances, there was tension in the air until the scoring was announced. The result was unanimous for Leonard: referee Kelly 49-43; judge Cecchini 48-45; judge Ray Klingmeyer 47-44.

“In all honesty, it was a very tough fight,” admitted Sugar Ray afterwards. “I tried to make him lose his composure. I just wanted to say that I have the heart and I’m going to be champion – nobody’s going to stop me.”