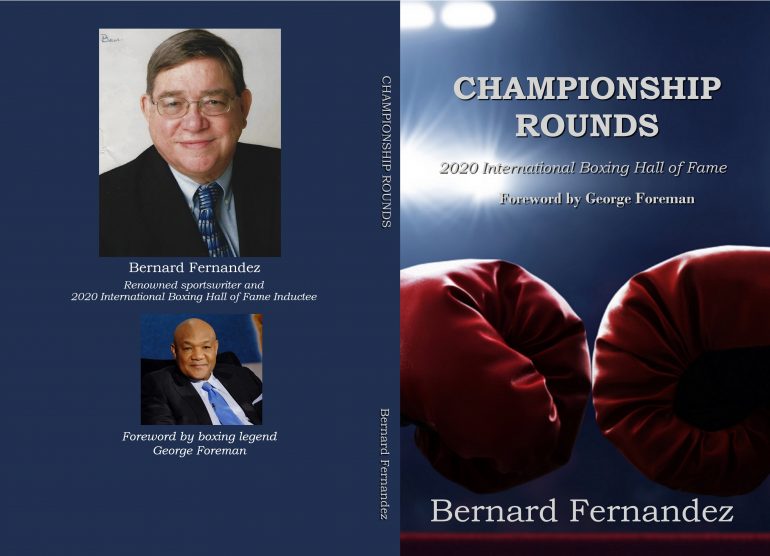 22
May
by Joseph Santoliquito

The idea had been buzzing around in Bernard Fernandez’s bulbous head (sorry, my dear friend, I had to do that) for years. But the esteemed, Hall of Fame boxing writer did not feel compelled to act until recalling a discussion he had with another noted colleague, former Los Angeles Times writer Steve Springer.

About 15 years ago, Springer told Fernandez that sports stories that appear in newspapers are like building pristine sand castles that get washed away in the daily surf. They’re impermanent. Though, being a book author lives on beyond the moment.

“That stuck with me,” Fernandez said. “I’ve had opportunities in the past to do books, but the way I looked at it, I wasn’t traveling like I used to, I’ve been retired from the Philadelphia Daily News for eight years and I never did a book.”

So, Fernandez got the urge to cull together some of his best work, and it’s produced “Championship Rounds,” an anthology that spans five decades worth of some of the best boxing stories any fan would love to read, with the foreword by all-time great George Foreman.

A sports writing veteran of 43 years, the last 28 with the Philadelphia Daily News before retiring on April 1, 2012, Fernandez covers everything in “Championship Rounds” from a one-legged fighter to the promise Hall of Famer Bernard Hopkins made to a terminally ill teenager, then defying the odds again to make good on the vow by upsetting Kelly Pavlik in October 2008.

The initial goal was to bring copies of “Championship Rounds” to Canastota, New York, to coincide with Fernandez’s induction to the International Boxing Hall of Fame in June. But the COVID-19 pandemic nixed that plan.

Among Fernandez’s more special stories involves Shaun Negler, who died of cancer at 18 in October 2008.

“I got a chance to be there when Shaun met Bernard, and it gave fans a chance to see Hopkins in a way that they weren’t used to seeing him,” Fernandez said. “I felt that this was a special moment, and how much inspiration Shaun was drawing from Bernard Hopkins. You could see how B-Hop was touched by Shaun’s circumstances.

“I think what led me to select the stories that I did was mostly because they were more than stories about boxing, fighters and fights. There used to be a cop show when I was a kid called ‘The Naked City,’ about New York city homicide detectives.

“At the end of each episode, they said, ‘There are eight million stories in the naked city, this is one of them.’”

A personal favorite is “We’re saving you a seat, Dad,” when Fernandez recalls saving a seat for his deceased father, a former decorated New Orleans police officer who had a handful of pro fights, before receiving the 1998 BWAA’s Nat Fleischer Memorial Award.

“A book is something that I always wanted to do, and many years ago, my father said he wanted me to write a book,” Fernandez recalled. “My dad’s been gone since 1994, and I’d like to think he knows that I did the book he always wanted me to do.”

For anyone interested in buying “Championship Rounds,” they can refer to: http://exploreauthors.com/index.php/2020/05/19/championship-rounds-by-bernard-fernandez/