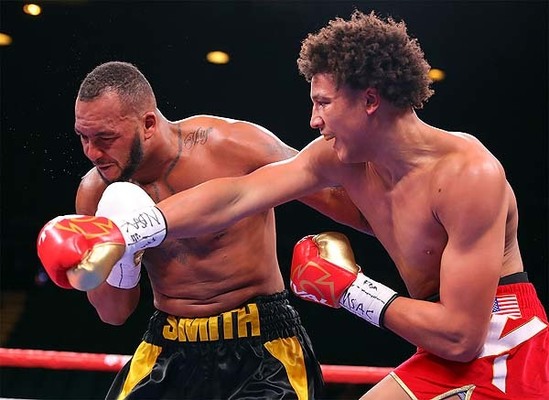 In the summer of 2010, a bored nine-year-old kid arrived unannounced at Rock Boxing Academy in Arlington, Texas.

“Let’s see what you got, kid,” he responded.

“Boxing chose me,” Kalkreuth said. “I was a young, athletic kid. I played soccer, basketball, football, but inside I always wanted to be a fighter and I believed I had what it took to be a fighter.

“Coach Rojas thought that I was very charismatic and he was impressed with my length and my height. Ever since, I’ve been dedicated to the sport of boxing.”

“He’s talented, charismatic and has a great amateur background,” De La Hoya said of Kalkreuth. “We expect big things for him in the future.”

His unique combination of height, length, skills, and charisma, has culminated with his comparison to the late, great Muhammad Ali.

Kalkreuth, who is now trained by the renowned Ronnie Shields, says he welcomes the correlation because every fighter should set a high standard.

“I’m excited more than anything else that I’m being compared to Muhammad Ali,” he admitted. “Every fighter that has dreams and aspirations of being an all-time great should set a high bar and that only makes me want to show more of my abilities in the ring. I have a very unique opportunity and I can’t wait to show the world what I’m capable of.”

Kalkreuth weighed 178.25 pounds for his first pro bout and has consistently tipped the scales at a higher weight since. For his most recent fight in March against Johnny Jackson, a first round stoppage win, he weighed 193.5 pounds.