Mikaela Mayer is ready and (tired of) waiting 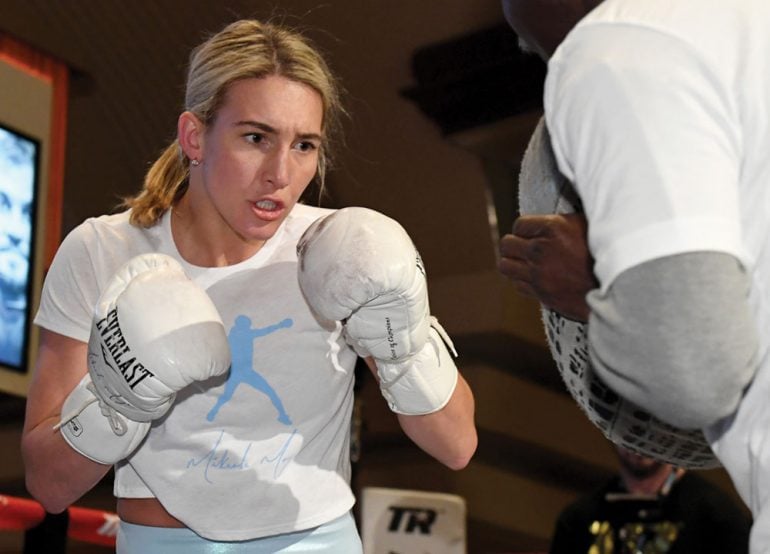 Mikaela Mayer. Photo by Getty Images
20
May
by Thomas Gerbasi

When we checked in with Mikaela Mayer last summer, we commended the 2016 United States Olympian and current junior lightweight contender for her patience in moving up the 130-pound ladder.

She isn’t so patient anymore.

“Yeah, my patience has worn thin,” Mayer said. “I feel like I put in the work, I’m confident, I feel like my body is peaking and I’m excited to show what I can do. I don’t think everyone has seen what I can do yet.”

There are a number of reasons why the 29-year-old has had a change of heart in the last few months. There was the fight with Melissa Hernandez called off at the 11th hour in March and, of course, the subsequent COVID-19 lockdown. But the final straw for the Californian was seeing WBC titleholder Eva Wahlstrom take an optional title defense in February against England’s Terri Harper and lose the belt to the Brit. It was a fight the No. 1-ranked Mayer believes should have been hers.

“I did an interview and I was asked about Terri Harper and I, of course, said that was originally my fight – me and Eva Walhstrom were in negotiations, and here comes (Matchroom Boxing’s) Eddie Hearn with his checkbook and cuts a bigger check,” she said. “And I get the business side of things. I’m not naïve to that. I get that. But I need to create a little hype, because I have been the number one contender and that should have been my title shot. I’m the number one contender; she was number 15. So yeah, I was pissed off when that happened. I’ve been trying to get a world title fight for the last three, four fights.”

Mayer took her case to social media, and after a little back and forth with Harper and Hearn, the American isn’t so sure that she’s going to get a showdown with Harper soon (she’s expected to face Natasha Jonas when boxing returns), but she has made a point that this is a fight that needs to be made in a sport that now has a new rivalry that will produce fireworks when the two do make it to the ring. 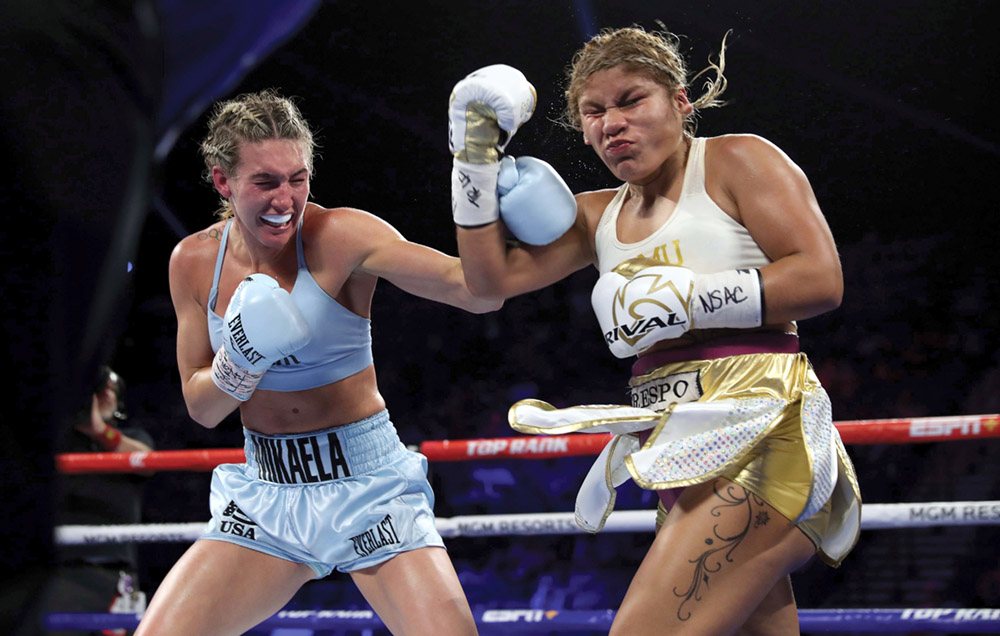 “I think eventually it will get made, but Eddie Hearn has made it clear that they have two other mandatories in front of them,” she said. “But our mandatories for women are kind of like, ‘Eh, do we want to enforce it?’ I don’t think she should have gotten that fight. Obviously, she’s gonna take what she can get and her promoter’s gonna fight for her and I get that, but when we do fight, I absolutely think that I will take it to her.

“She has a title, yeah, but I only watched that one fight of hers,” continues Mayer. “She’s young, she’s a good, classic boxer. I get it. Good job. But she doesn’t have that fight in her that I have. I would take it to her. I’m 10 times stronger than her, I’m more well-rounded – she can box from the outside, but if I take it to her on the inside, she’s gonna have no idea what to do. I can fight in all different areas of the ring, and I know she only has that one way that she can fight. She’s gonna work on it – I know she’s gonna try to get better – and Eddie Hearn’s smart; he’s gonna get her some experience before they go up against someone like me. So I know she’s not gonna give it to me right away.”

Call those the first shots fired for the showdown between the 12-0 Mayer and the 10-0 Harper, and despite the pandemic, the buzz is growing for a fight that doesn’t include the Big Four of Cecilia Braekhus, Katie Taylor, Amanda Serrano and Claressa Shields. That’s a big deal for a sport that needs all the new stars and fights to get excited about that it can get. Even Mayer assumed that getting a big fight would require a move up in weight for Ireland’s Taylor. But in the last couple months, Mayer sees the possibilities at 130 pounds for meetings with the likes of Harper, IBF titleholder Maiva Hamadouche, WBO titlist Ewa Brodnicka, and WBA champ Hyun-Mi Choi, not to mention contenders like Melissa St. Vil and Jonas. 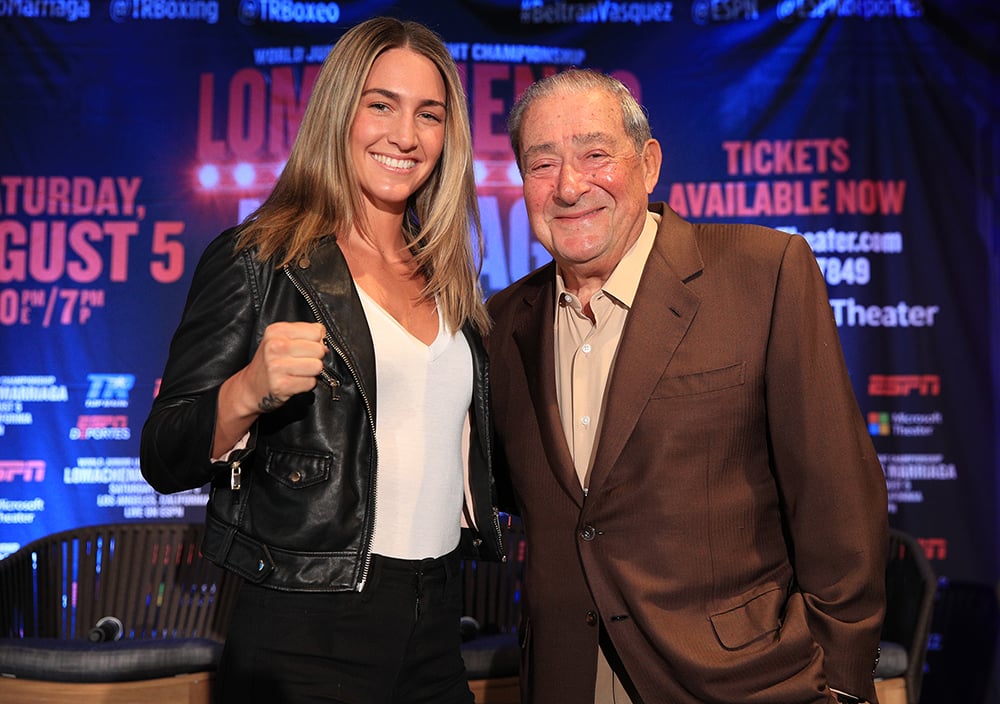 “Honestly, just to make this clear, my weight division is exciting,” she said. “Before, I was thinking, ‘OK, get the experience, get the world title at 130 and then move up to 135 for the exciting fights, like Katie Taylor and all that.’ But no, my weight division is stacked right now, and I think it’s one of the most stacked divisions.”

Knowing that good things are coming has put a spark back for Mayer, who could have made a major statement by beating former titleholder Melissa Hernandez on St. Patrick’s Day in New York City. That statement, like the rest of the boxing world, was put on pause. But even with that situation, Mayer has found a way to get her work in, traveling first to Maryland, then Houston, in order to stay sharp for what she hopes is a June return to the ring.

“I was at home doing the whole quarantine thing and I just felt like I needed to be with one of my coaches, and I can’t go be with Coach Al (Mitchell) because I don’t want to risk getting him sick, and he’s been super quarantined – he has not left his house and is going crazy,” Mayer said. “So me and (Team USA squadmate) Ginny (Fuchs), we need structure – we were getting a little fat. (laughs) So we said, ‘Let’s make the trip and go re-quarantine near Coach Kay (Koroma).’ So that’s what we did.”

Now she just wants to get into a fistfight, even if it’s not the world title fight she’s craving.

“I haven’t fought since October, and now my next fight can’t be for a world title because of the travel ban,” she said. “So I’m gonna have to fight another American and I’m hoping they’ll give me someone exciting. I’m sick of fighting people nobody knows. I’m ready to fight somebody that has a name so we can start building some hype. I feel so sharp and so strong and I’m just ready to show the world that I am the best. I want to kick some girls’ asses.”

That’s not the patient Mikaela Mayer that we used to know, but you have to like the fired-up version who is ready to start taking names at the top of the division. And even without the title around her waist right now, knowing that she will ultimately get her shot shows just how far the women’s game has come in recent years.

As she tweeted in April…

“What people don’t understand is that this is only the second wave of #womensboxing. The first wave died out over a decade ago because they weren’t supported by society or the Olympic movement. The women u are seeing now r the PIONEERS in a women’s #boxing movement that will LAST.”

“I want to kick some girls’ asses.”

Even when Mayer first put on the gloves, she wasn’t sure where this would lead. That’s a scary thought when you’re thinking of dedicating years to something that may just leave you at a dead end. But she’s here, she ain’t going anywhere, and she’s got an army of peers with her to make sure this sport continues to grow.

“When I first walked into the gym, what was I thinking?” she said. “Women weren’t allowed in the Olympics and there was no real pro game for us. I pursued this dream with no path. I didn’t even have a vision at first. I had to create the vision as I went along. So to look back and see where we are now, it’s really amazing. And not just me, but where women’s boxing is today; the girls that have come up with me, I think it’s something we have to recognize. Yeah, in women’s boxing there were the Laila Ali days and that was great, but it did die out. The difference now is the support of the Olympics. Now women are able to compete at the highest level and the talent pool is deep. Whereas before, there just wasn’t enough talent to keep it going. You see more little girls in the gym than you ever have before and there’s a ladder for us to climb. There’s a path, and I stepped in it at the perfect time. It makes me more positive that I’m living my destiny. This is what I was supposed to do.”