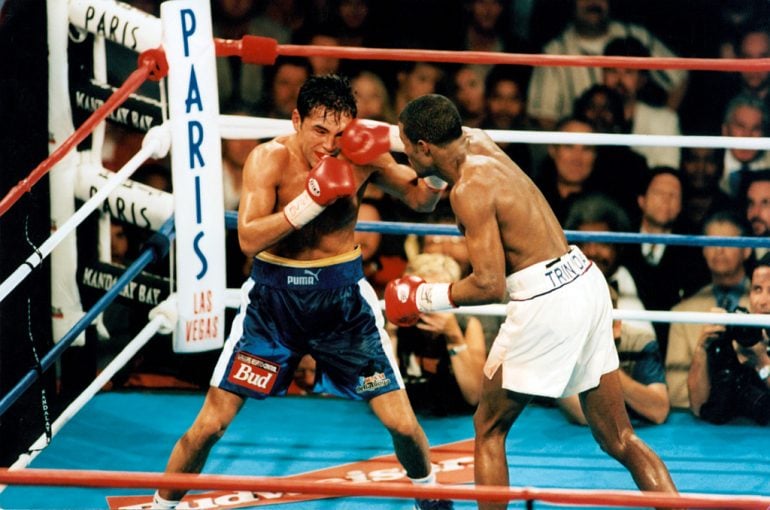 De La Hoya (left) and Trinidad in their 1999 welterweight unification bout. Photo from The Ring archive
19
May
by Joseph Santoliquito

Bob Arum is amazing. The Hall of Fame promoter will turn 89 in December, and he’s still as brilliant, ornery, defiant and steadfast as ever. He possesses more energy than most people in their 50s.

On Wednesday, ESPN2 will provide fight fans with a treat, airing five consecutive hours of some of boxing’s most debated decisions, starting at 7 p.m. ET with Oscar De La Hoya vs. Félix Trinidad. In addition to the linear telecast, the fights will also be available on ESPN+.

Among the more debated fights in the group is Hagler-Leonard. 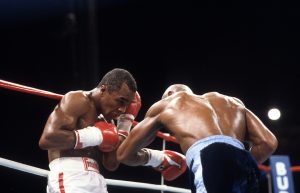 Leonard (left) in battle against Marvelous Marvin Hagler. Photo from The Ring archive

The Ring’s 1987 Fight of the Year still rankles Arum, 33 years after Leonard was awarded a debatable split-decision victory.

“I remember Marvin, for some inexplicable reason, fought the first three rounds righthanded and didn’t do too well,” Arum recalled. “But I had Marvin winning the fight seven rounds to five. I mean all of these five fights being shown should be scored by the public round-by-round.

“They’ll have a lot of fun doing it. I thought Marvin beat Leonard. I thought De La Hoya beat Trinidad easy. I thought Oscar won his second fight over Mosley, while I scored Pacquiao-Márquez even, which Pacquiao squeaked out with a victory. I remember Castillo-Mayweather I like it happened yesterday.

“Both Castillo and Mayweather were my fighters. I went over to Mayweather’s corner to commiserate with them, and I remember what I said: ‘Don’t be discouraged with a loss. I know it’s your first loss, but you’ll get over it. Then Floyd got the decision. Not only did he get the decision, but he got the decision wide.

“The second fight, Floyd clearly won. The scoring was very, very tight, which I could never figure.”

Why did these controversial decisions occur?

Arum placed some reasons as to why.

For De La Hoya-Trinidad, Arum said a secret meeting was held between Trinidad’s people, including his father and trainer, Felix Sr., with two Nevada State Athletic Commission commissioners. Trinidad’s people expressed their reluctance about fighting in Las Vegas, because of a penchant to favor the “Golden Boy.”

According to Arum, the state commission told Trinidad it wouldn’t happen, and they told the judges not to favor De La Hoya in the fight.

“That tilted the scales to Trinidad’s side, and that’s documented,” Arum said. “They’re all good guys, and they were trying to do a job for the state. It was Dr. Elias Ghanem and James Nave from the state commission who assured the Trinidad people that there wouldn’t be an imbalance in the scoring.

“Inadvertently trying to live up to that, they titled the balance to Trinidad. Look at the scorecards of that fight. Look at Jerry Roth’s scorecard, scoring some of those early rounds for Trinidad, when it was clear that Oscar won eight or nine of the first 10 rounds.”

Mayweather’s first lightweight fight came against Castillo, who was making the fourth defense of his WBC title. According to CompuBox, Castillo outlanded Mayweather, 203-157. HBO’s ringside judge, the late Harold Lederman, scored the fight for Castillo by four points. The official judges, however, scored it unanimously in Mayweather’s favor.

How, wonders Arum to this day? 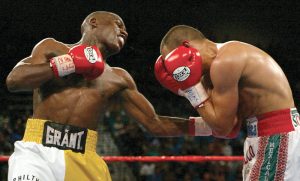 Floyd Mayweather Jr digs a hook to Jose Luis Castillo during their hotly contested, controversial first bout, which had the WBC and Ring Magazine 135-pound titles on the line.

“It wasn’t that the judges favored Mayweather, who lived here in Las Vegas, it’s that they favored his style,” Arum said. “If you watch that fight, how could give that fight to Mayweather, particularly by the margin they gave it to him?

“Then you have Hagler and Leonard, and there was always some suspicion about that fight. There was one score that was absurd, and some other things that I don’t want to get into.”

It has Arum’s juices flowing again. He said he plans on scoring the five fights again, which he has not done in a while.

“That’s what I suggest everyone do,” Arum said. “Look at these fights, score them again, and I hope ESPN2 puts it up what the judges scored. As a public, we get to score these fights in real time.

“I’m going to be angry again!”

Oscar De La Hoya vs Félix Trinidad (7 P.M. ET): The two long-reigning welterweight champions and pound-for-pound greats met in the “Fight of the Millennium” on Sept. 18, 1999, with De La Hoya defending his WBC title and Trinidad defending his IBF title. De La Hoya landed 97 more punches (263 to 166), but after 12 tensely fought rounds, Trinidad was controversially declared the winner by majority decision. The bout set the pay-per-view record for a non-heavyweight fight with 1.4 million buys, a mark that stood until it was broken by De La Hoya-Mayweather on May 5, 2007.

Oscar De La Hoya vs Shane Mosley II (8 P.M. ET): In a rematch of their first bout in June 2000 — won by Mosley via split decision — De La Hoya put his WBA and WBC super welterweight world titles on the line against the former welterweight and lightweight world champion. According to CompuBox, De La Hoya landed more punches (221-127) and was the more accurate puncher (36%-26%). Despite De La Hoya winning in the eyes of most boxing experts, Mosley was declared the winner in a controversial unanimous decision.

Manny Pacquiao vs Juan Manuel Márquez III (9 P.M. ET): The only fight of the four between them not to feature a knockdown, Pacquiao and Márquez once again went to a decision in this WBO welterweight title fight. Pacquiao was making the third defense of his title and landed more punches (176-138), but Márquez was the more accurate of the two fighters, according to CompuBox (32%-30%). The bout generated 1.4 million pay-per-view buys in the United States, which was Pacquiao’s best pay-per-view total until his 2015 mega-fight against Floyd Mayweather Jr.

Marvin Hagler vs. Sugar Ray Leonard (10 P.M. ET): Longtime middleweight champion Hagler had made 12 successful defenses of his world title before facing the returning Sugar Ray Leonard, who had not fought in almost three years. Leonard, who was attempting to win a world title in a third weight class, built an early lead, but Hagler came on strong late. Ring Magazine named Hagler-Leonard the 1987 Fight of the Year, and the split-decision victory for Leonard cemented a comeback for the ages.

Floyd Mayweather Jr. vs. José Luis Castillo I (11 P.M. ET): After eight successful defenses of his super featherweight title, Mayweather moved up in weight for his lightweight debut against Castillo, who was making the fourth defense of his WBC title. According to CompuBox, Castillo outlanded Mayweather 203-157. HBO’s ringside judge, the late Harold Lederman, scored the fight for Castillo by four points. The official judges, however, scored it unanimously in Mayweather’s favor.

ESPN+ features a library of hundreds of the most important fights in boxing history, as well as recent Top Rank on ESPN fight cards for replay, all streaming on demand. The historic fights on ESPN+ include legendary heavyweight showdowns like Ali vs. Frazier III, Ali vs. George Foreman, Joe Louis vs. Billy Conn, Tyson vs. Holmes, Jack Dempsey vs. Gene Tunney, Max Baer vs. James J. Braddock, Ali vs. Sonny Liston I & II, Wilder vs. Fury II and many more.

(All fights are also available streaming on demand on ESPN+)