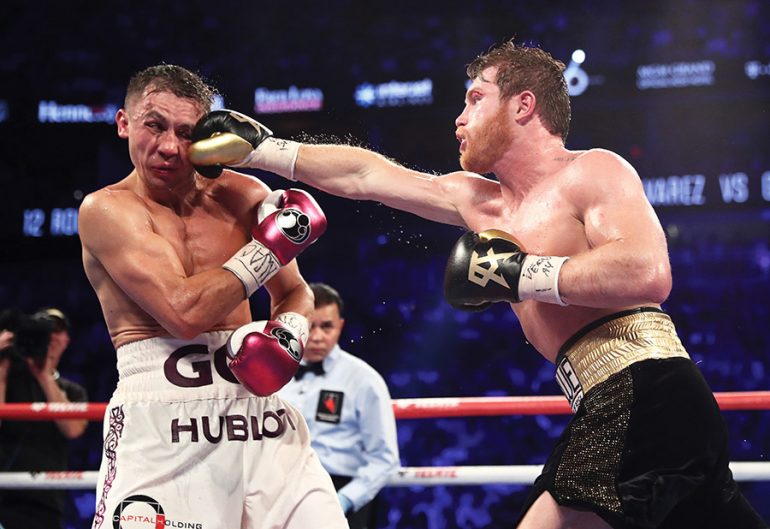 With a third fight between Canelo Alvarez and Gennady Golovkin not taking place anytime soon, the question is: Who will Alvarez face in his next bout?

There is the possibility that The Ring Magazine middleweight champion and pound-for-pound No. 1 will face WBO super middleweight titleholder Billy Joe Saunders. That was the original plan for May 2 in Las Vegas before the COVID-19 pandemic intervened.

But according to trainer Eddy Reynoso, Alvarez (53-1-2, 36 knockouts) has a variety of options.

“We realistically want two fights this year,” Reynoso told Mexico’s Box Azteca in an interview on Thursday. “We couldn’t fight in May, so we are looking at September and December. We’re talking about (possible opponents) like Billy Joe Saunders. There’s also (IBF titleholder) Caleb Plant and the WBC world titleholder at 168 pounds (David Benavidez). There are several (possibilities).”

Both Benavidez and Plant are unbeaten and would present the Mexican superstar with a stern test.

As for Golovkin (40-1-1, 35 KOs), he had intended to fulfill his IBF mandatory sometime this summer against unbeaten Kamil Szeremeta of Poland. The 38-year-old power-puncher has not fought since October 5, when he defeated Sergiy Derevyanchenko by unanimous decision to claim the vacant title.

“Golovkin could be the fight for December,” said Reynoso, who was The Ring Trainer of the Year for 2019. “His people have already said that he doesn’t want to fight Canelo until after the (Szeremeta) fight.”

Alvarez and Golovkin first faced off in September 2017, fighting to a split-decision draw in a fight many felt Golovkin won convincingly. A rematch occurred a year later, with Alvarez scoring a majority decision in a very close fight.