Mercito Gesta does his part, dropping off lunch to healthcare workers 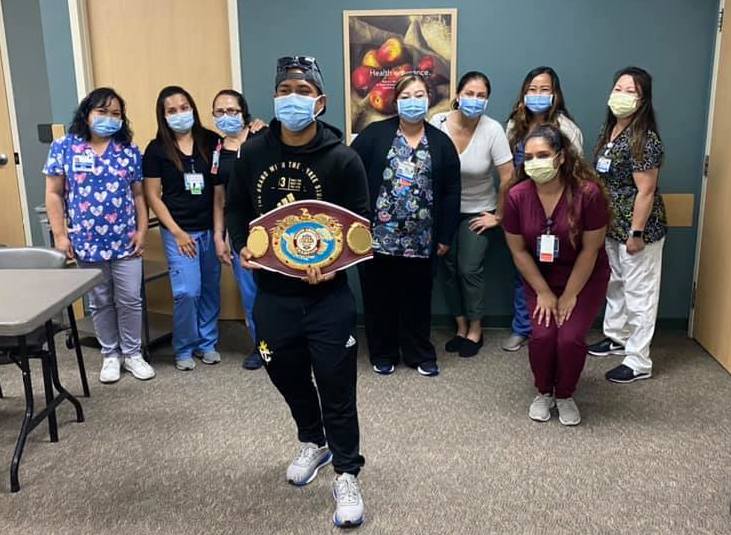 Gesta poses for a photo with healthcare workers at Kaiser Permanente Medical Offices in Bonita, California. Photo from Gesta's Facebook
17
May
by Ryan O'Hara

Per his own account, Mercito Gesta was raised by his parents to be a humanitarian before a fighter. But one week after his 16th birthday, he stepped foot into the ring for the first time.

“It was my first fight, and I won a unanimous decision,” he recalled. Gesta did not have an amateur career, and boxing was seen as a last resort to help his struggling family with money. In a four-round contest, he outpointed Edwin Picardal in Taguig City, Philippines in 2003.

Born in Mandaue City, located in the Philippine province of Cebu, Gesta exhibited great natural abilities and tallied 10 wins and a draw before relocating to the United States.

“I don’t know; I just love to fight,” Gesta said. “I’ve been fighting for my entire life, and boxing will always be my passion, but I also want to do my part to help others in need.”

And during a global pandemic, Gesta (32-3-3, 17 knockouts) is doing just that, delivering food to essential workers on the front lines battling the COVID-19 pandemic.

Sponsored by restaurant chain Epic Wings, the 32-year-old delivered chicken wing meals from the establishment to groups of doctors and nurses at Gateway Medical Group.

“Thank you so much! Stay safe out there,” one nurse exclaimed.

Gesta later responded: “Thank you for letting me send you some food. Thank you — I’m honored.”

“Thank you very much,” another nurse told Gesta, who has handed out three lunches worth about $640. “It has been an honor serving the community. When the community gives back, it really means a lot to us.”

Gesta has another delivery on Thursday for the San Diego Police Department and is also planning to hand out meals to a Kaiser facility in Irvine and a fire department in Orange County.

In the ring, Gesta is known for having “No Mercy,” but that is a far cry from the man who continues to show his appreciation for America’s heroes.

“My dad taught me at a very young age to be respectful and to be kind to everyone,” he continued. “I’m not even doing that much, but if I can convince someone to do the same and to do it with a smile, and to make these people feel appreciated and to feel happy, then I am doing a good job.”

Besides good parenting, something has to be said about the Filipino culture, right?

“Oh, absolutely,” Gesta replied. “Giving and helping other people is ingrained in us from the beginning. I have great love and respect for everyone, especially our first responders who risk their lives every day.

“In the Philippines, everyone is close to one another; there is always mutual respect. And of course, it’s all about family, too.”

If there is anything about American culture that Gesta would change, what would it be?

“People need to be more respectful in general,” he said. “When a cashier makes a mistake, people get really angry right away. Some respect and compassion will lead us the right way.”