Joseph Aguirre applies will to succeed to fighting and legal careers 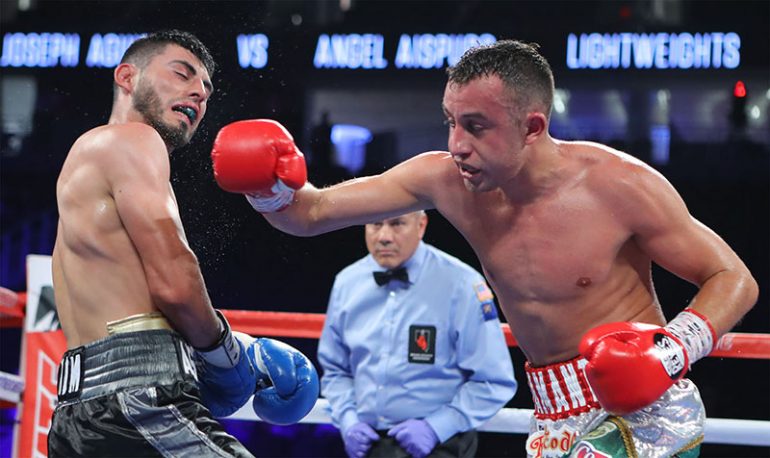 A Mexican born in the United States.

A boxer one day and an attorney the next.

If Joseph Aguirre were preparing for a film role, it would likely be a huge hit. As a fighter however, he remains a more ambiguous proposition: a solid prospect still on the prowl for his first significant test.

The undefeated Aguirre, who is coming off an impressive third-round knockout of journeyman Jose Luis Marcano last October in Cancun, Mexico, where he currently resides, is focused on becoming the next Mexican superstar.

“I think it would be amazing to fight on either Cinco De Mayo or Independence Day weekend on the main event,” Aguirre (23-0, 12 knockouts) said. “I grew up in Mexico and I am 100 percent Mexican. It would be a tremendous honor, but my situation is different than most Mexicans.

“I was born in Irvine, California, but my parents reside in Mexico. My father wanted me to be born in the U.S., so that’s how that came to be, but I am Mexican.”

Aguirre, who competes in the lightweight division, credits his father for his success not only in the classroom, but also inside the squared circle.

“My father taught me everything about hard work,” he added. “He learned English by writing letters in Spanish and looking up what the words meant in English.”

Some people say money equals happiness, but for Aguirre, it is about the drive to succeed that fulfills him.

“It’s all about your mentality,” Aguirre, a graduate of Anáhuac Cancún University, asserted. “I didn’t need money to become a lawyer, I became an attorney by having the will to succeed. Money can only get you so far.”

Aguirre, 29, has applied that will and desire to become great in his approach to boxing.

“Boxing is a once in a lifetime opportunity,” he continued. “If I get an offer for a big fight, I’m ready to put it all on the line. I was born for this.”

Aguirre was also inspired by eight division champion Manny Pacquiao, who famously stepped up to face Lehlohonolo Ledwaba on two weeks’ notice for the IBF super bantamweight title in 2001, and dominated the skilled South African for a sixth round TKO win.

“Like Manny was that night, I’m ready for that opportunity,” Aguirre said. “I’ve been fighting for a long time, seven years as a professional, and I think I can beat the top guys.”