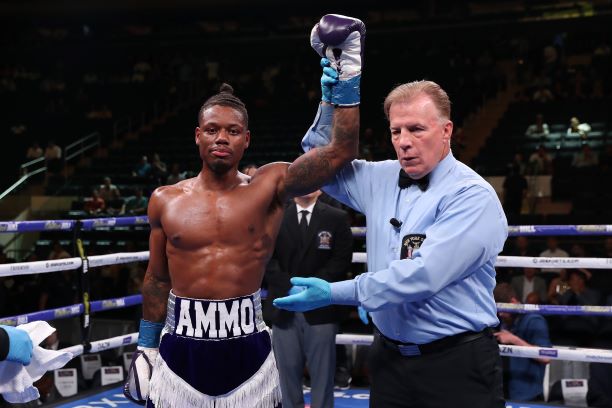 Austin Williams was lying there broken, curled up sweating on a dorm room cot. For three weeks, he hardly moved, except to perform daily requisites. Otherwise, he was too depressed to grasp this new reality.

His identity, at that juncture, was shattered, wrenched away by a college basketball coach who did not think his skills were worthy to merit a scholarship. He would have to make it as a walk-on, the coach said. “Ammo” had other plans. He was not about to play a practice dummy to be bowled over every day by the regulars.

He saw himself one day playing basketball in front of thousands.

Not reduced to this; sawdust on a college dorm bed.

Enlightened by a dream he had of a ring walk under strobe lights, Ammo stopped feeling sorry for himself. He almost knows the exact day and date it occurred: a Wednesday in February 2015.

It’s when he decided on a different course.

“I was probably malnourished, that’s what might have caused the dream,” recalled Williams, laughing. “Seriously, though, I didn’t even want to be in the world, I didn’t even know who I was. I was embarrassed. Basketball was my life.

“When that coach told me that I wasn’t a scholarship player, that was like a finishing blow that could have destroyed me. Then that dream hit me. I could have gone off and started doing some evil things.”

Instead, Williams went off to the library for three days and watched film of Roy Jones Jr. Something, Ammo says, compelled him to do it.

“I fell in love with boxing, and it was a cool thing to see this artist do his work,” he said. “God saved me, or whatever you believe God is. I’m a spiritual person and I believe it was this gift sent to me. Basketball was something for someone else, not me.

“Boxing was going to be where I was going. It was like an outer body experience. I had to go through all of that depression to get to where I am now.”

Today, Williams, 24, finds himself one of the hottest middleweight prospects in boxing.

Trained by Dwight Pratchett, promoted by Eddie Hearns’ Matchroom Boxing, and managed by Hollywood producer/director Peter Berg and Sam Katkovski, Williams is a 5-foot-11 southpaw who is 5-0, with four knockouts.

Lying in the college dorm room was Williams’ nadir. He said it was like being swallowed by a great whale and spit out on the shore.

“For the first time in my life, I was told that I wasn’t good enough,” Ammo said. “That’s hard to take when you’ve played basketball most of your life, and you were always among the best.”

Williams started boxing when he was 19—ancient considering when other elite fighters began.

This year has stunted Ammo, like everyone else during the COVID-19 pandemic, but he has no timetable when he would like to fight for a world title. He turned 24 on May 3.

Although he started late, Williams benefits from not having the body erosion other fighters his age endure.

“Ammo was meant to be a fighter,” Pratchett said. “He has great natural ability, and he’s an athlete. He loves to learn. When I first saw him, he fought a kid who had a lot more experience and Ammo beat him. Ammo got hit a few times, and he took it.

“He is a diamond in the rough. Once he gets down to old-school boxing, moving his head, not getting hit, and he gets his feet right, he’s going to be even better. He has power and speed.”

Ammo has a boxer-puncher style. Pratchett likes Williams’ jab, and how he reads punches. If he’s going to reach greater heights, Pratchett stressed, Ammo is going to have to trust his jab more.

“Austin is a young, very talented fighter with a great personality, and he wants to be taught,” said Katkovski, who also manages Regis Prograis. “The talent is there, and anyone who talks to Austin is drawn to him.

“He has all of the qualities to be a superstar. After this pandemic is over, we’re going to make him as active as he wants to be. But overall, we don’t have a specific timetable on him.”

Eric Bottjer, Matchroom’s matchmaker, has one of the best eyes for talent in boxing—and is one of the most truthful in the sport. Bottjer points out Williams had only 41 amateur fights. Taking that into consideration, Ammo will not be fast-tracked because he’s still learning.

In his fourth-round knockout of Donald Sanchez in January, Williams exerted his left jab, though not as often as he should have.

“Austin has to learn patience and figure out what he did wrong when he gets hit,” Bottjer said. “He’s a very good, very intelligent kid, who’s with really good people. Dwight Pratchett is a good trainer, and his managers are very good.

“Everyone is a potential superstar. But no one can tell with four- and six-rounders. Austin is going to be fighting guys in the near future who are more experienced than he is, so he can improve. It’s a matter of him learning his craft.”