Mike Tyson’s comeback isn’t for money or legacy, but for his soul 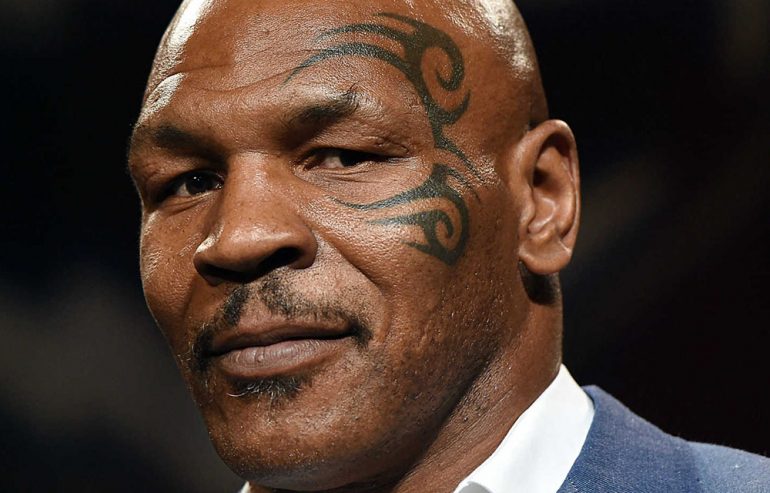 14
May
by David Greisman

Mike Tyson still has it.

That’s what everyone was tempted to say after videos emerged of Tyson with boxing gloves back on.

Here was the long-ago Baddest Man on the Planet, the long-retired former heavyweight champion, the no-longer “Iron Mike” reminding us of who he once was, of what once entranced us, and why he continues to captivate us decades after his best days.

Tyson ferociously pounded pads, explosive and exciting, speed and power in brief bursts. The short videos are incomplete sketches that recall the finished product but can never again approach them, a portrait of the knockout artist as a young man.

Whatever abilities Mike Tyson still has aren’t the real story, however. The “it” that Tyson actually still has, even after all these years, is the ability to magnetize and polarize.

It’s OK that he has our attention. We just need to properly adjust our expectations.

Don’t believe the hype. But don’t listen to the cynics either as they remind us of what Tyson could not do anymore when he was in his late 30s and shouldn’t even try now that he’s approaching his mid-50s.

They don’t truly understand why he’s training again and talking about returning to the ring. They see all comebacks through the same lens.

This isn’t yet another past-his-prime fighter who is some combination of delusional and desperate, who convinces himself he still has what it takes to compete at a high level — or needs money so badly that he’ll market his name and legacy, sacrificing both in the process, bringing diminished talent and trading them in for diminishing returns.

That’s not what’s happening here. Tyson isn’t coming back to recapture the titles he lost or recoup the hundreds of millions he squandered. He’s coming back for the sake of his soul, trying to reconcile his old life with his new one.

Mike Tyson has long been aware that he wasn’t “Mike Tyson” anymore, that the mystique and motivation had vanished even when he was an active fighter, even more so now that he’s a retired Hall of Famer. 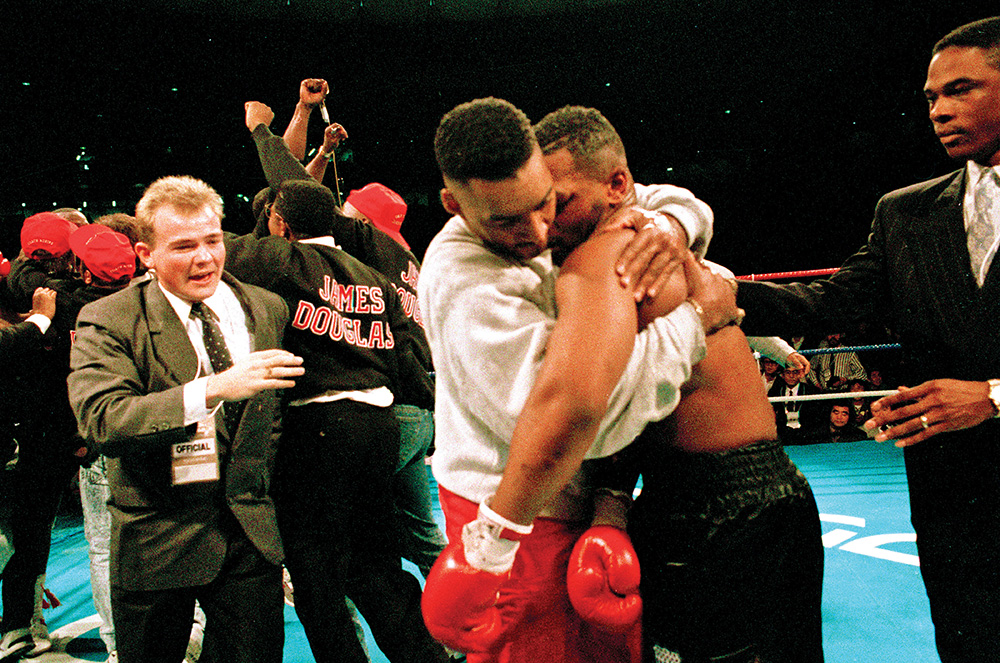 That shocking loss to Buster Douglas is now 30 years ago. Soon came a prison sentence on rape charges, a comeback in 1995, a world title win, and two demoralizing defeats, as Evander Holyfield broke him down in 1996 for the technical knockout, and then as Tyson himself melted down in 1997 in the rematch, biting Holyfield’s ears, tearing cartilage, drawing blood and the disqualification.

Those losses were 23 years ago. He fought on because he needed money and this was still the best way for him to earn it. He was no longer a competitor, but rather a commodity. He was no longer Mike Tyson in the ring, but he was still the champion when it came to selling tickets and pay-per-views. He set a new pay-per-view record against Lennox Lewis in 2002, then took a one-sided beating and an eighth-round knockout.

Tyson believes he’s empty, that retirement left a gaping hole in him, that losing boxing meant losing himself.

That was 18 years ago. It was Tyson’s last shot at the heavyweight championship. Afterward, he said he might fade into oblivion — well, infamously, he said he’d “fade into Bolivian.” There was still some water to squeeze out of this misshapen sponge, even as his talent continued to diminish, and even as the returns did the same.

A win over Clifford Etienne in one round in 2003. A knockout loss to Danny Williams in four rounds in 2004. Quitting against Kevin McBride in 2005.

“I just don’t have this in my gut anymore. It’s just not in my heart anymore,” Tyson said after McBride, at last at ease, at last realizing reality. “I look good. I feel good. But then when I went out there, I can’t do it.”

He never returned to the ring, excepting one exhibition bout against Corey Sanders — the American journeyman who once knocked out Oleg Maskaev, not to be confused with the South African journeyman Corrie Sanders who knocked out Wladimir Klitschko to win a world title. 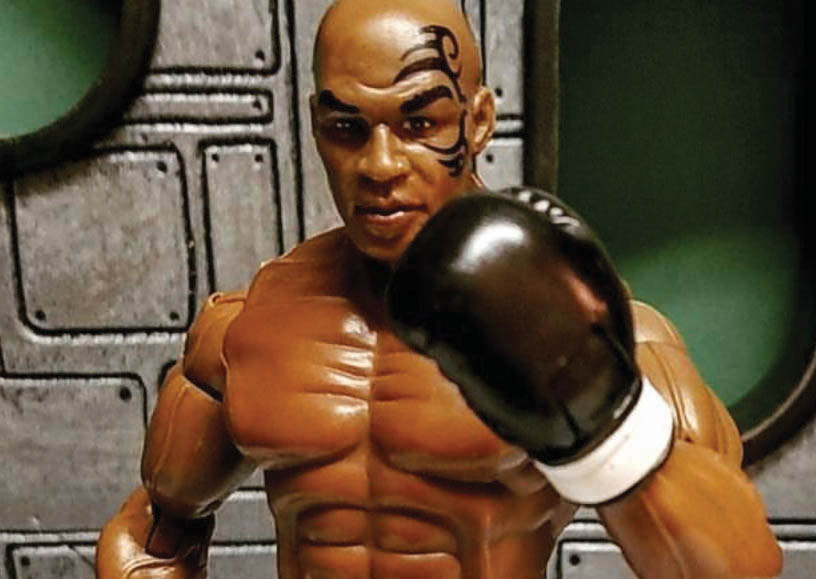 Tyson struggled in retirement, as do so many fighters when they no longer have the fight game. He ballooned in weight. He found outlets for his celebrity, making cameos in movies, appearing on television programs and talk shows. It seemed at times, though, that the man who was once the most feared fighter on the planet, so imposing that he was the final boss of a video game, was now being laughed at. He’d gone from “Mike Tyson’s Punch-Out” to Mike Tyson, punch line.

None of that mattered when compared to the sorrow of losing his 4-year-old daughter, who died in a tragic accident at their home in 2009.

Tyson easily could’ve unraveled. Any parent would. He grieved and mourned, but he also worked to establish a new normal. His post-boxing life found meaning at home with his wife and children, and he established the next stage of his professional career with a one-man stage show and television special, an autobiography, and public appearances. He lost weight. He looked and sounded better. He was stable.

“We made it out of our hellhole,” Tyson said at the 2017 SALT Conference in Las Vegas, according to CNN. “I just knew it was time to grow up. It was time to be a man. Time to be present in your children’s lives.”

There’s still a constant battle between who he was and who he’d become. There was the old version of Mike Tyson, whose power and glory were byproducts of his dark side — and vice versa. And there was this older Mike Tyson, who would no longer do the bad things he’d done while young, but who also couldn’t aspire to or achieve the great things either. 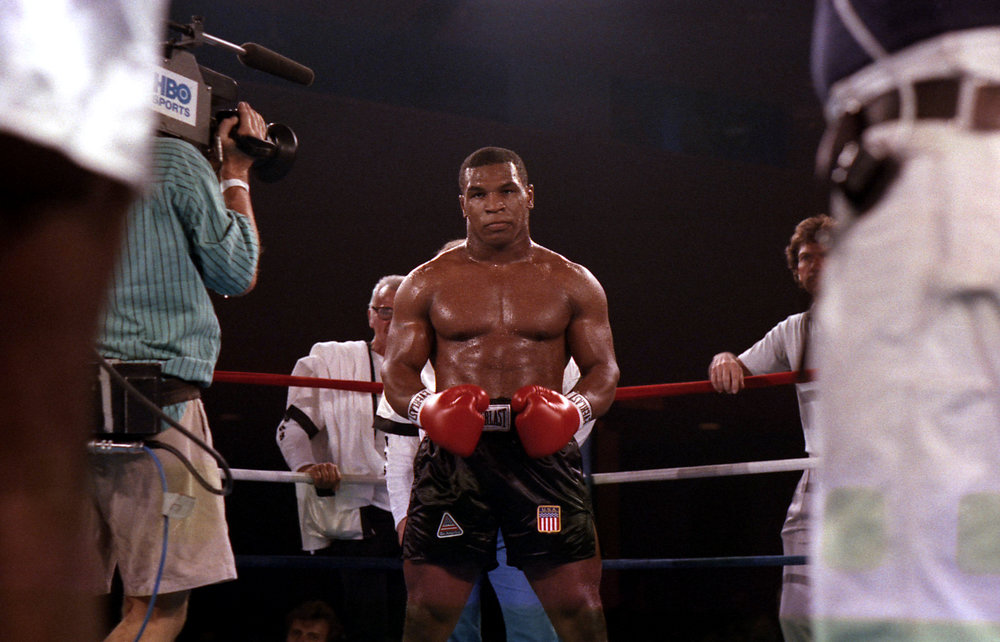 Tyson prior to fighting Jose Ribalta in 1986. (Photo: The Ring)

“I know the art of war. That’s all I ever studied. That’s why I’m so feared. That’s why they feared me when I was in the ring. I was the annihilator. That’s all I was born for. Now those days are gone,” Tyson said earlier this year on an episode of his Hotboxin’ podcast.

“It’s empty. I’m nothing,” he said. “I’m working on being the art of humbleness. That’s the reason why I’m crying, because I’m not that person no more, and I miss him. Cause sometimes I feel like a bitch, because I don’t want that person to come out, because if he comes out, hell is coming with him.”

And that’s where this comeback comes in.

Tyson believes he’s empty, that retirement left a gaping hole in him, that losing boxing meant losing himself. That’s because he was a Method actor as a fighter. He bought into the idea of himself as annihilator, rightly believing he was sent to the ring to destroy, amped up by confidence and cockiness. When Tyson couldn’t intimidate or annihilate, when his opponents were both mentally and physically strong enough to withstand him and stand up to him, he was the one whose mind gave in and whose body followed.

He can be humbler and happier, and he can be hell-bent in training without being a hell-raiser in life.

It became a façade. He pumped himself up and left deflated. As he said after his final loss to McBride, “If I can’t beat him, I can’t beat [former 122-pound titlist] Junior Jones.”

Tyson said he was done after McBride and stuck to his word. He couldn’t be the annihilator anymore. That hole would have to remain.

He just needed to properly adjust his expectations.

Mike Tyson knows he can’t be “Mike Tyson,” can’t be everything that is conjured up with those two words. He knows he can’t have real fights against real foes. But those goals are unrealistic, unnecessary.

He doesn’t need to reestablish who he once was. He can redefine what it means to be Mike Tyson.

This isn’t an either/or proposition. He can be humbler and happier, and he can be hell-bent in training without being a hell-raiser in life. He can find joy in the process rather than the product — in what it feels like to train again, even if it he can’t truly box again. He can satisfy his desire without flirting too closely with danger. The burn of the workouts alone are making him feel more alive.

“I’m in pain,” Tyson joyfully told rapper T.I. in a video posted on Instagram late last month. “I feel like three guys kicked the shit out of me.”

He is a former warrior trying to recall his glory days while maintaining these more peaceful halcyon days. But he could’ve done that privately. These videos came out because he knows the power he still has after all these years, the ability to captivate an audience. And although he continues to build his brand in retirement, this isn’t merely about helping himself.

“I’d like to do some charity exhibitions, make some money and help some homeless and drug-affected motherfuckers,” Tyson said to T.I.

That’s how Tyson can find fulfillment — can redefine fulfillment — when his fighting days were such a big part of a self-centered, self-destructive lifestyle. 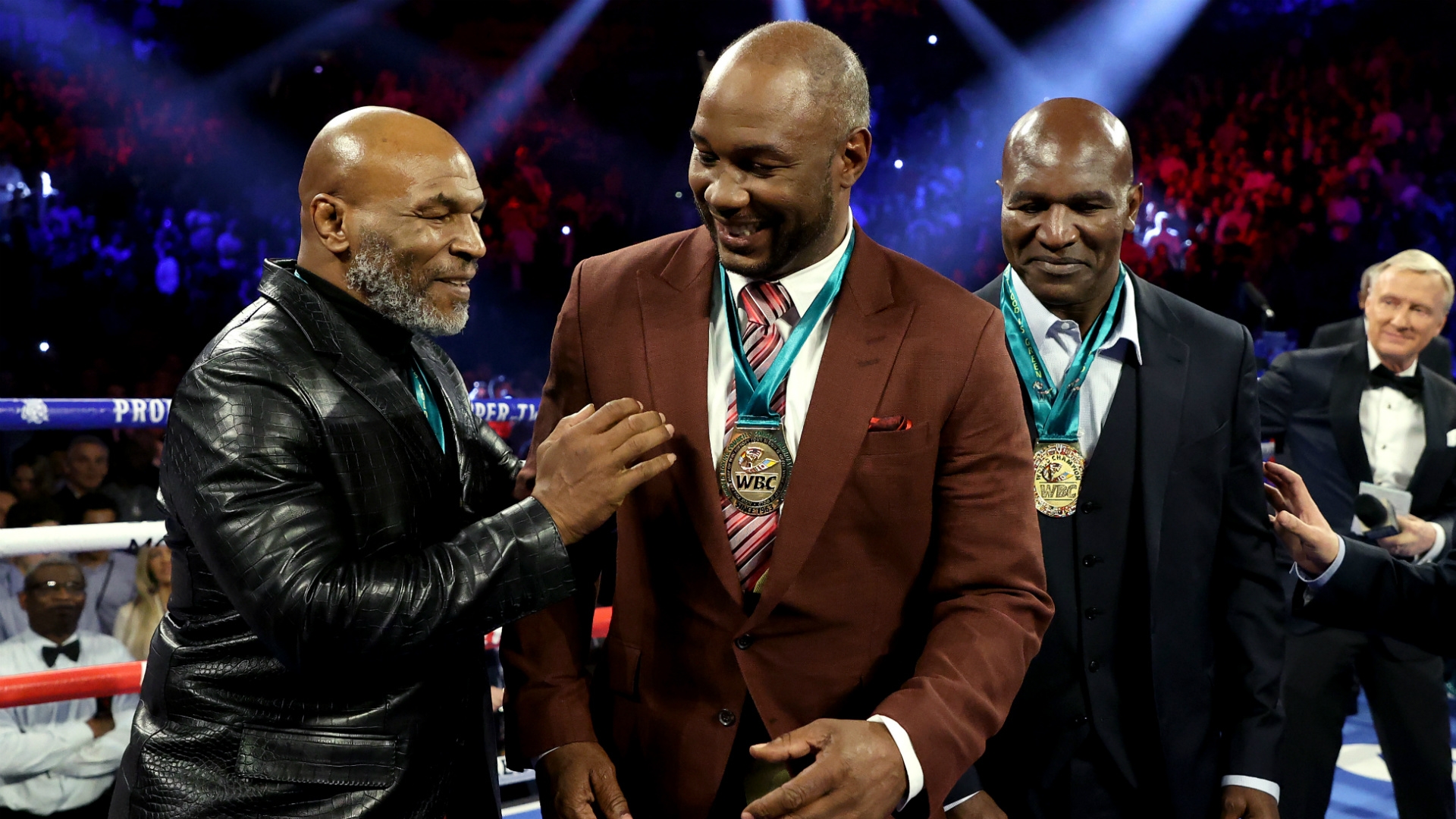 That’s how he can get in the ring in a safe manner, stepping in with Evander Holyfield (who pantomimed an exhibition fight for charity against former presidential candidate Mitt Romney five years ago) or Lennox Lewis, two former heavyweight champions and former Tyson rivals who’ve formed friendlier relationships in retirement. They would be willing sparring partners toward the cause.

There’s always been a market for nostalgia — the shows that return or reunite years after they first concluded, the sequels and reboots in film and television — and a captive audience as we all sit quarantined at home. That’s why ESPN moved up “The Last Dance,” which millions are watching every week on ESPN in order to reminisce about Michael Jordan and the great Chicago Bulls teams of the 1990s.

There are also markets for violence and sideshows, for meaningless boxing matches involving big personalities. Logan Paul and KSI pulled in several million dollars on pay-per-view long before the pandemic. Now, with television networks unable to film new programming, Tyson and Holyfield could easily land a television slot once it’s safe to stage an event, raising money in the process.

That would be the biggest victory for Tyson in years.

He could recall the best of him without releasing the worst of him. He could put on a show that does more good than harm.

Loving the special editions of The Ring?

Coming up next, we’ve got the Gatti-Ward trilogy, and after that, the man himself …