From the Archive: Who wins Evander Holyfield-Mike Tyson superfight… in 1991? 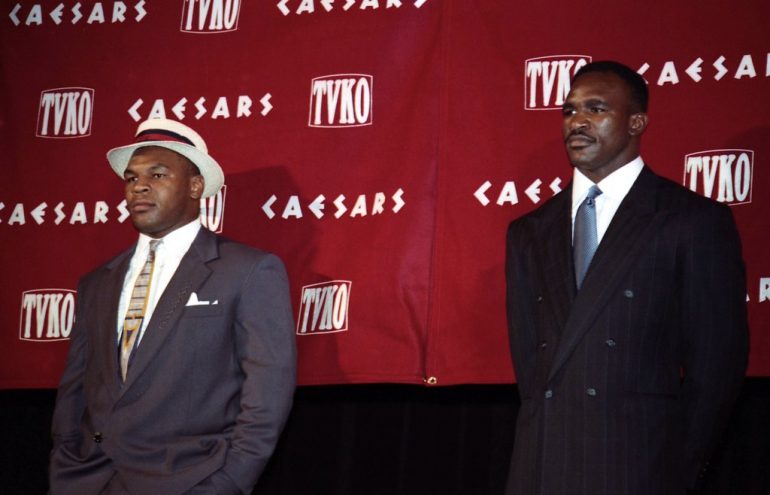 Holyfield-Tyson fell through in 1991. Photo by The Ring/ Getty Images
14
May
by The Ring

Editor’s Note: This feature originally appeared in the December 1991 issue of The Ring Magazine. It is a buildup piece ahead of the November 8, 1991 heavyweight championship bout between Evander Holyfield and Mike Tyson, which was later aborted when Tyson sustained a rib injury.

It’s all so right. The most important fight of year, indeed of many years, will take place with the world watching. The boxers will clash in an outdoor ring at Caesars Palace. At stake will be the most significant title in sports: undisputed heavyweight champion of the world. A good, if not memorable, fight is all but guaranteed. On Friday night, November 8, it won’t be necessary to explain to anyone why boxing is great. 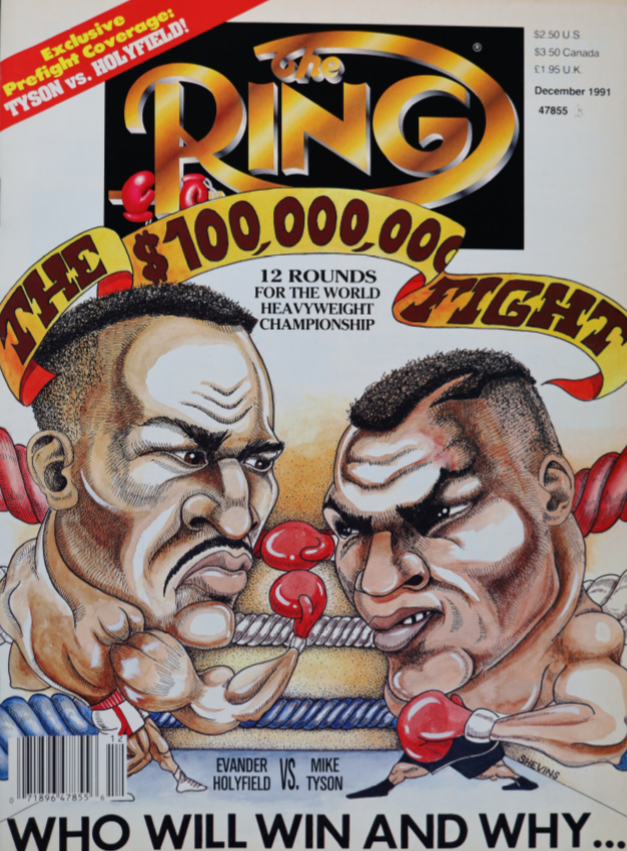 Should they clash as scheduled, champion Evander Holyfield and former champion Mike Tyson will make history. Holyfield will earn a record purse of at least $30-million, or more than half of what Muhammad Ali made during his entire career. Tyson will take home at least $15-million, a record for a challenger. Given the potential of pay-per-view TV, it’s possible that the fight will be the first ever to gross $100-million.

For pure fight fans, of course, the numbers are secondary. Holyfield demands respect and Tyson demands attention, so when they meet in ring center, something magnificent will surely happen. The fight is all that really matters.

So what exactly is going to happen? Tyson, still regarded by many as the world’s best heavyweight, is a 2-1 favorite to regain the crown, most likely by knockout. But Holyfield has never been downed, much less beaten, and as a result, a battle of wills, not just skills, is sure to unfold. This will be a superfight in the purest sense of the word.

Before analyzing the matchup, The Ring found it necessary to answer a few basic questions. The most critical among them:

• Is Evander Holyfield a legitimate heavyweight? He most certainly is. Holyfield’s body is better suited to carry 210 pounds than Michael Spinks was to carry 200. He may lack the size and power to hurt Tyson, but that by itself does not eliminate him as a knockout threat.
• Is Mike Tyson as dangerous a fighter as he was during his title reign? He most certainly is not. Tyson hasn’t changed his intent, but it’s only natural that his hunger has subsided. And his style has been unmistakably altered. Gone is the peekaboo stance taught to him by Cus D’Amato, as well as some of the combinations – remember his lethal right to the body-right uppercut to the chin? – that made him the most feared fighter in boxing. But Tyson has retained his hand speed, power, and big-time chin. Which brings us to the most important question of all: Will those ingredients be enough to beat Holyfield. 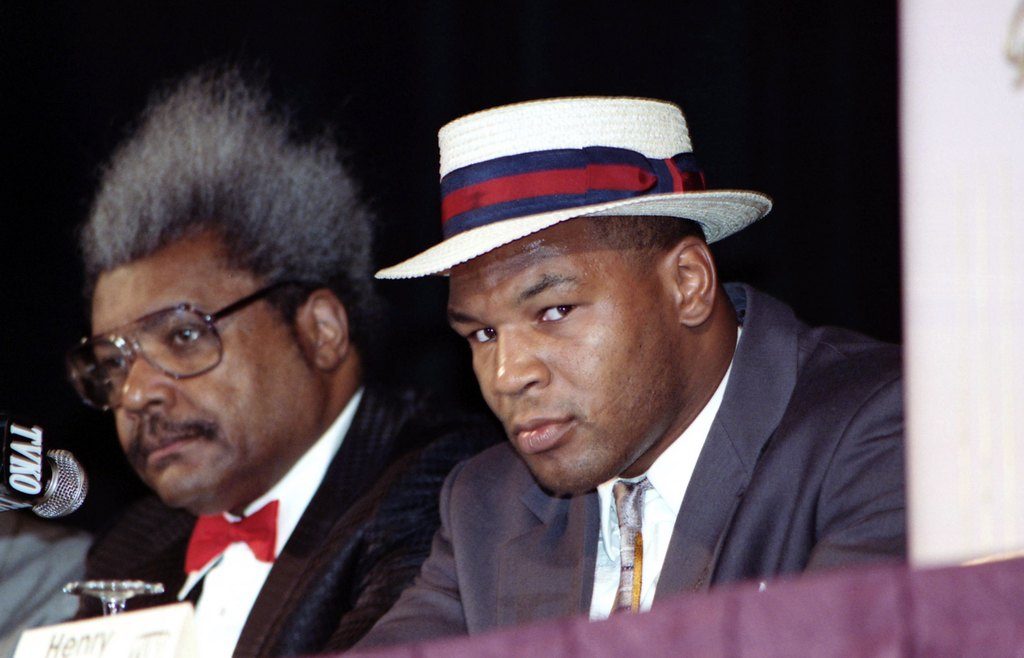 When you’re a 5-foot-11 ½ heavyweight with a reach of 71 inches, you don’t have a Plan B. Most great fighters – Duran at lightweight, Robinson, Ali, and Leonard all come to mind – had the ability to adapt to their opponents. Tyson’s muscle mass and short arms, however, preclude him from blueprinting creative game plans. His philosophy is a simple one, and he dares not wander from it: I’m coming. Try and stop me. He knows he’ll hit Holyfield, but how hard? And he knows he’ll be hit in return, but how often?

You can be sure that if Holyfield scores an upset, it will be because of his mental, not just physical, toughness. In Holyfield’s pre-title heavyweight bouts, he was criticized for needlessly brawling with a pair of outclassed punchers, Alex Stewart and Seamus McDonagh. Instincts, it seemed, had won over discipline. But against both Buster Douglas and George Foreman, Holyfield implemented trainer George Benton’s strategies of caution to perfection.

Tyson will pressure Holyfield as he has never been pressured before. Benton will have instructed the champion to discourage Tyson’s forward progress with a power jab, and, once Tyson moves to within breath’s distance, turn him with subtle lateral movement. In other words, punch with Tyson only on Holyfield’s terms. Holyfield will attempt to heed the advice, but it’s far easier to maintain discipline against slo-mo behemoths like Douglas and Foreman than fast-forward assassins like Tyson.

At some point, or perhaps at several points, Holyfield will satisfy Tyson’s quest for confrontation. A furious trade of potentially paralyzing punches will result. If this happens over the last third of the fight, it will favor Holyfield. But if it happens from rounds one through eight, Tyson will capitalize on his fortune. 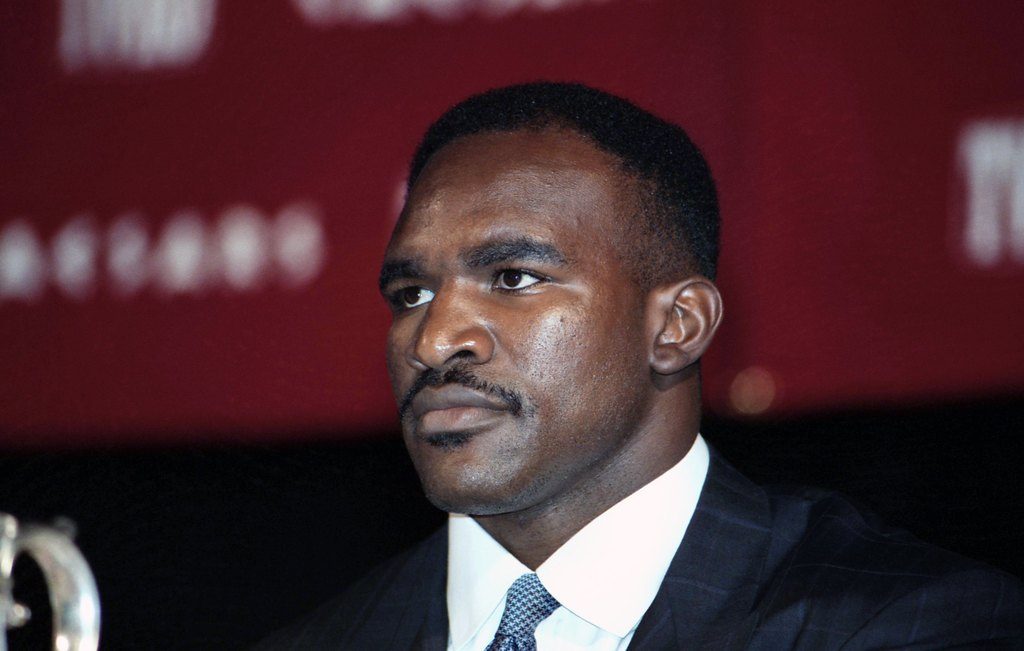 It is a given that Holyfield will attempt to control Tyson with a persistent jab. But, unlike Douglas, or, say, Riddick Bowe, it’s doubtful that his jab can dominate a fight. Because of that, Holyfield will need to score with a significant number of power punches, whether they be crosses, hooks, or uppercuts. He’s capable of doing it – no heavyweight can match his work rate – but how will he do it?

Early in the fight, Holyfield will either wait for Tyson to lead, and counter the widest blows with short shots, or, if Tyson’s defense proves instantly penetrable, attack with one-twos and flurries in an effort to get off first. The potential problem with the second type is the risk of turning the fight into a slugfest. Remember, Tyson is capable of countering, too. When being punched at, though, he most often elects to cover up.

From rounds one through four, Holyfield is more apt to try the first approach. Tyson is most dangerous in the early parts of his fights, and Holyfield can bank on dozens of counter opportunities. If he opens the fight determined to punch first and command respect, we’ll likely witness the heavyweight equivalent of Hagler-Hearns, round one.

If the fight lasts through the middle rounds, Holyfield will expect Tyson to decelerate. When and if he does, the champions will switch his plan and begin to lead. This will pay off in two ways. First, it will help him narrow the points lead Tyson is likely to have built, and second, it will maximize his chance for a knockout victory. Holyfield, hi-tech-trained to perform for 12 rounds, realizes that when Tyson is extended to the late rounds, he invariably loses much of his effectiveness.

Three more keys to Holyfield’s plan: movement, clinching, and street fighting tactics. Against Foreman, Holyfield proved mobile enough to distance himself from Foreman’s looping, telegraphed blows. Boxing at an arm’s length, Foreman offered a strong jab, but not speed. Tyson, on the other hand, will offer speed, but a negligible jab.

In order to capitalize on his 6 ½-inch reach advantage, it would seem logical to conclude that the champion will need to move even more than he did against Big George. But he’ll move less, for three reasons. One: He likes to punch, and Tyson will always be within his reach. Two: He knows Tyson has devoured those who have fled from him. Three: He is versatile, but he knows his limitations, and he’s not a runner.

When he finds himself on the inside, which will be often, Holyfield must either step to the side and quickly punch, or hold on. If he doesn’t, he’ll provide Tyson with an inviting target for his devastating right uppercut, as well as the division’s most punishing body punches.

When engaging in phonebooth warfare, Tyson will also resort to tactics perfected by the villains of the World Wrestling Federation. Should be indiscriminately deliver low blows and elbows, look for Holyfield to respond in kind.

“If you kill my dog, your cat’s gotta go,” says Benton. We think we know what he means.

With Holyfield likely to open in a countering mode, Tyson will need to immediately impose his will. Pre-fight psychological ploys will be pointless – Holyfield won’t be intimidated. But once the opening bell sounds, the challenger must convince Holyfield, as he did Michael Spinks, that his explosiveness can negate the soundest of fight plans.

As in all of Tyson’s fights, the first round will be particularly revealing. Tyson doesn’t have to finish Holyfield without breaking sweat, but it will be critical that he jump out in front. If he fails to do so, he won’t win the fight.

Don’t look for Tyson to jab his way in. That weapon was punishing against Tyrell Biggs, and in segments of some of his other title fights, but he no longer consistently utilizes it. Instead, he’ll rely on his hand speed to fire his pet combinations – right to the body-hook to the head, for instance, or lead right-hook. As always, he’ll increase his effectiveness if he releases more than one or two blasts at a time. But more important than his volume will be his accuracy. Sharp punches are more difficult to counter than haymakers, and more likely to land against Holyfield, an adequate, but hardly outstanding defensive fighter.

If the fight progresses into the late rounds, Tyson will need to remain focused. Razor Ruddock never hurt him, and that may have contributed to Tyson’s sloppiness toward the finish. Holyfield isn’t the one-punch crusher Ruddock is, but he excels at stringing together power blows and releasing them with superior hand speed. As Tyson slows and his guard drops, that type of attach can be devastating. 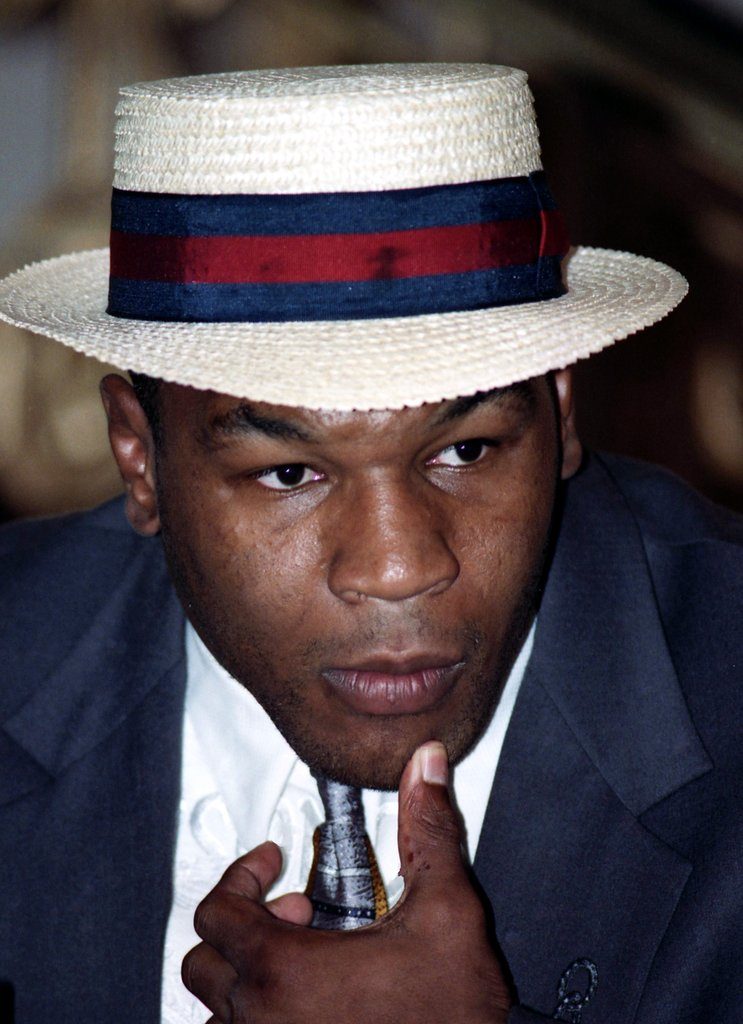 Photo from The Ring Archive

Tyson will need to summon a Herculean effort to regain the title. We think he still has the tools to do it. Holyfield is a primed warrior, and as such, will fight until he is thoroughly beaten. It would shock us if, even a terror like Tyson, if he falls in the first three rounds.

As is often the scenario in heavyweight fights, the outcome will be determined by the power to punish, and the ability to absorb punishment. As previously mentioned, sooner or later, the fighters will trade muscle. When they do, Tyson will exhibit at least as strong a chin as the champion, and a marked advantage in power.

For the first four rounds, the pace will be demanding. Tyson will swing for a kayo, and Holyfield will coolly execute Benton’s plan. From rounds five through eighth, however, Tyson will repeatedly force Holyfield into compromising situations. (It’s conceivable that he might even have to rebound from a flash knockdown along the way.) Early in the eighth, he’ll maneuver the champion to the ropes and connect with a series of brutal blows. Holyfield will remain standing, but the referee will sense his vulnerability and wisely intervene. There will be no controversy concerning the stoppage.

The fight we’ve all been waiting for will end in a most satisfactory way: with a conclusive winner. And that winner, via eighth-round TKO, will be Mike Tyson.