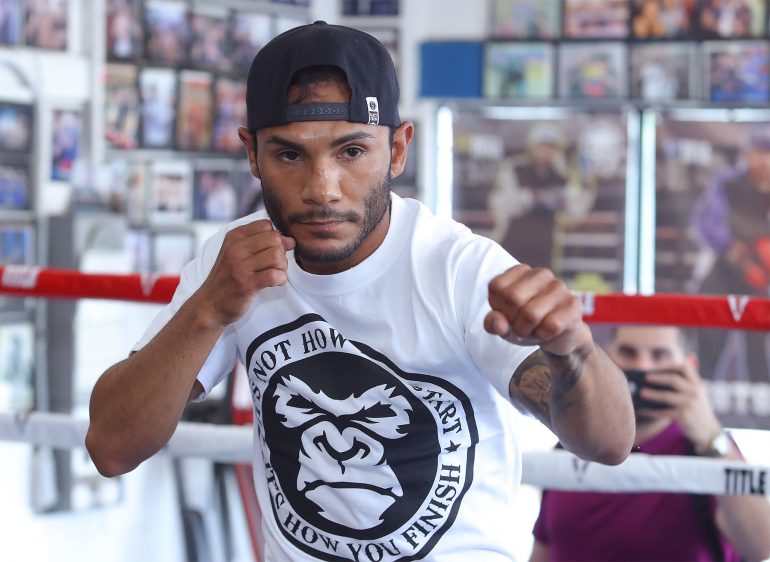 Andrew Cancio strikes a pose during a media workout. Photo by Tom Hogan-HoganPhotos / Golden Boy Promotions
13
May
by Francisco Salazar

“Joe put Andrew to work for 28 rounds,” Chaparro told The Ring. “He really made Andrew work.”

“We have nothing but respect for ‘Hoss.’ He’s one of the best mentally-prepared trainers in boxing,” said Chaparro. “Andrew believed he just needed another push towards one day fighting again for a world title.”

After losing to Rene Alvarado on November 22, Cancio was released from his promotional contract with Golden Boy Promotions, reportedly due to criticizing the promotional company for not placing him on more prominent platforms.

He was expected to debut under Top Rank, who signed him earlier this year, against once-beaten Tyler McCreary on April 25. However, that fight, which was scheduled to take place on the Naoya Inoue-John Riel Casimero undercard, was postponed due to the COVID-19 pandemic.

Goossen, who has gained a reputation for resurrecting the careers of fighters that are on the back end of their careers, has trained several world titleholders over a career that has spanned over 30 years. He has worked with Michael Nunn, Rafael and Gabriel Ruelas, Joel Casamayor, the late-Diego Corrales, Shane Mosley, and most-recently Amir Khan, John Molina, and Chris Arreola.

Cancio is ranked No. 7 by The Ring at 130 pounds. The 31-year-old, who works full-time for the Southern California Gas Company, celebrated the birth of his daughter Penelope Rose this past Saturday morning.

He currently lives and trains in the California coastal city of Ventura.