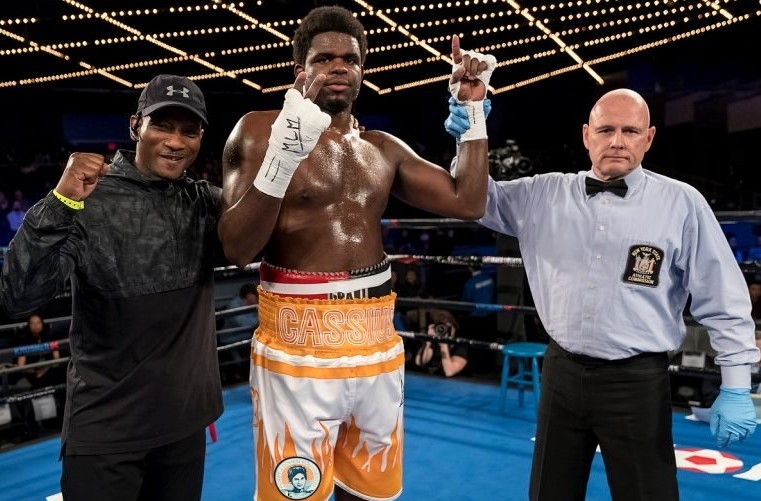 Cassius Chaney didn’t take a whole lot seriously growing up. Being raised in the East Baltimore badlands, he admits that he had a twinge of a temper. But otherwise, Chaney was more prone to laugh and skirt danger than engage in it.

That worked until one time a kid named Devin kept chasing him home from school over a girl. Chaney, then in seventh grade, would call Devin a “bitch” from a distance, then take off because he knew his neighborhood. There was no way Devin, a little taller and a high school freshman, would catch Chaney.

One integral person in Chaney’s life grew tired of seeing her son running home every day—his mother, Brenda Pledger. She, along with Chaney’s older brother, Robert, decided to put a stop to it.

So, in the first major confrontation of his fight career, Cassius Chaney’s first fight was promoted by his mother and managed by his brother.

They arranged for Chaney and Devin to settle their issue once and for all. The two knocked each other around in front of the neighborhood. No one was hurt. Everyone walked away unscathed—and Cassius didn’t have to run home from anyone.

Today, Chaney is the one doing the chasing. He’s running after a boxing dream trying to compensate for the missing time as an amateur.

Chaney, 32, is an athletic 6-foot-6, weighs 250 pounds and carries an 18-0 record, with 12 knockouts. He also possesses a sports management degree from the University of New Haven, where he played Division II basketball.

“I always knew how to fight, so I have that going for me,” said Chaney, laughing. “I’m still learning how to box. I often wondered if my parents were told I should box when I was born, and they didn’t guide me to it.

“My main thing growing up was getting into fights at basketball camps. I had a short fuse. It was competition and I would start fighting. But it’s interesting, I always liked it.”

At 14, Chaney moved in with his grandmother in New London, Conn., and attended Old Saybrook High School in Old Saybrook, Conn., the alma mater of former NBA all-star Vin Baker.

Chaney knew he had to get out of East Baltimore.

“I’m happy I did, because I didn’t have to worry about hopping in a stolen car with a friend,” Chaney said. “At Old Saybrook, they picked us up in a van. I learned the value of an education. I moved how I wanted to move. Old Saybrook allowed me to be a kid.”

Boxing, Chaney figures, was a lost calling, that shadowy figure on the fringes of his life.

First, Chaney was self-taught. He went on social media messaging fighters on how to get started. Keith Thurman replied and heavyweight contender Dominic Breazeale reached out, suggesting that he get at least three years of amateur experience.

He was already around 25.

And, New London was not exactly a boxing hotbed. He worked during the mornings at a daycare after-school program and trained until 5:30 p.m.

Chaney was looking for guidance and he found it in trainer German Caicedo, managers Zach Levin and David Berlin and promoter Main Events. Levin and Berlin discovered Chaney when he sparred Otto Wallin, who is co-managed by Levin and Berlin, in preparation for his fight against Tyson Fury.

“A large part of my delay was moving to Connecticut and I signed with someone, at first, and we were learning together,” Chaney recalled. “I was living with my grandmother and I had to make sure she was okay. I met Zach and I met David. I met German and I still had his card.

“I wanted the chance to show what I could do. I left Connecticut and moved to Florida where German is. I knew going there would give me an opportunity to wake up and see a boxing ring every morning.”

Caicedo has been working with Chaney for the last few months. The two first met last year when Caicedo had Chaney come to his Miami, Florida, training facility to spar Luis Ortiz and Carlos Negron.

Caicedo liked what he saw.

“Cassius was a really stand-up guy and sometimes you don’t always get what you pay for (in sparring), but I liked what I saw from Cassius,” Caicedo said. “When he left, I gave him my card and told him if I could help him out in any way, let me know.

“His managers got in touch with me, because Cassius insisted.”

Chaney transitioned from basketball to boxing in small pieces. Chaney was in many camps, though was a nomad for a good portion of his career. Now he has a team behind him.

“Cassius did start late, but when he did begin, he was all-in,” Caicedo said. “He listens well—and he wants to learn, and he’s eager to learn. He’s educated, and he trusts the process of what we’re doing. He asks a lot of questions and watches a lot of film. He’s a student of boxing.”

Chaney is working to embrace working behind his long reach. He’s getting pushed every day by the likes of Ortiz and Negron. One day when Ortiz entered Caicedo’s gym, he quickly corrected Chaney on what he was doing with his lead foot before saying hello.

“When we put Cassius in his first fight, you can tell he was really green,” said Jolene Mizzone, Mains Events’ vice president and matchmaker. “I like how he’s such a student of boxing. After every heavyweight fight, we talk about it. Cassius has developed unbelievably since his first fight.

“With COVID-19 virus slowing things down, I would still like to see Cassius fight for a championship sometime in the middle to late next year.”

“Cassius did start late, but the benefit of that is that he doesn’t have the wear-and-tear most fighters get through sparring for years,” Levin said. “Time will tell, but I think Cassius will be the exception to coming to boxing late. He loves boxing. He watches fights constantly.

“He doesn’t have any crazy things in his life weighing down. He’s well placed where he needs to be. His limited amateur career is made up by the great camps that he’s been in. When his opportunity comes, he’ll be ready.”