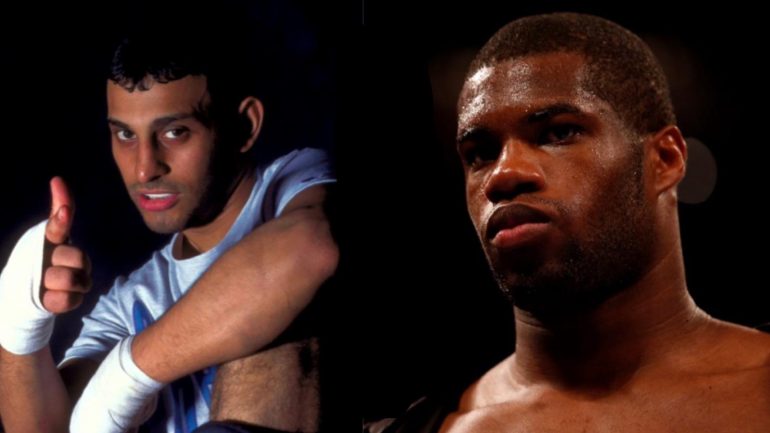 Photo courtesy of Queensberry Promotions
08
May
by Ring TV

Speaking on the latest instalment of Frank Warren’s Heavyweight Podcast, the Sheffield icon expressed his admiration for promoter Warren’s eye for talent and spoke of the qualities that he believes make Dubois a surefire superstar.

“Frank knows how to pick the best fighters” he said, “and at the moment I think he’s got one in Daniel Dubois who I really think is going to light up the world.”

No stranger to a knockout himself, Naz added: “He has that crushing power. I love the way he fights… the way he punches to the body too.”

Despite his young age Dubois has already carved out an impressive 14-0 professional record, with 13 KO’s to his name, and has a list of boxing luminaries queuing up to praise him.

Hamed’s voice joins those of George Foreman, David Haye, Frank Bruno and Larry Holmes, amongst others, who have recently spoken of the potential for greatness in Dubois’ future.

‘Dynamite’ is next scheduled to face domestic rival Joe Joyce in a mouthwatering all-British battle that many see as a stepping stone to world title contention.

Hall-of-Fame promoter Frank Warren clearly agrees and earlier this week declared Dubois to be the “best Heavyweight prospect on Planet Earth” and sensationally backed him to be victorious in a potential shootout with Deontay Wilder.

Prince Naseem wasn’t drawn on that particular match-up but did issue an ominous warning to the Heavyweight division as a whole.

“I am looking forward to watching Daniel Dubois’ career unfold. For me, I believe he takes over Heavyweight boxing.”

Famous for his exploits in the lighter weight classes, Naz did also reveal that he is keeping a keen eye on another of Queensberry’s brightest prospects: 19-year-old Bantamweight, Dennis ‘The Menace’ McCann.

“I like Dennis. Dennis is a good fighter, definitely. I’m expecting him to be a world champion.

“For me, that’s one of the guarantees of boxing: Dennis and Daniel Dubois being world champions.”