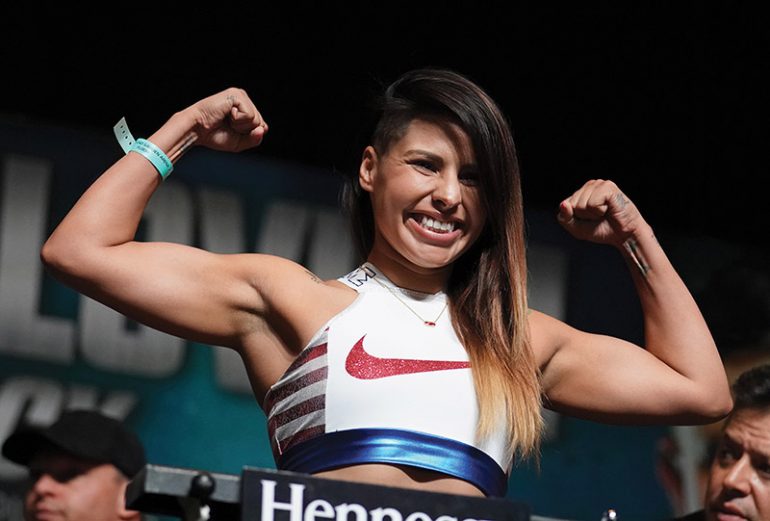 Marlen Esparza
08
May
by Ryan O'Hara

Is it too early to crown Claressa Shields as the greatest woman of all time?

Flyweight contender Marlen Esparza told The Ring earlier this week that for Shields to label herself as the greatest woman of all-time is “disrespectful.”

Shields (10-0, 2 knockouts), 25, a two-time Olympic gold medalist, currently holds belts in three different weight classes. She unified belts at 168 pounds before becoming the undisputed middleweight champion. Then she moved down to 154 pounds where she won a pair of vacant straps in January with a one-sided drubbing of Ivana Habazin in the main event of a Showtime tripleheader.

At the very least, Shields deserves to be in the conversation as the “GWOAT.” On the other hand, the consensus among boxing historians is that the talent pool in women’s boxing is not deep enough in this era to crown anyone the greatest. It is somewhat unfair to Shields, who is a terrific athlete with impressive technical skills, and her physical strength is much greater than her opponents.

But regardless of what Shields has accomplished in the ring, Esparza is not a fan of her attitude.

“That means every woman who walks this planet who boxes; she’s basically saying, ‘F you and I am the champion.'”

“I think she saw Floyd do it,” she added. “But I think it is inappropriate and disrespectful right now.”

Is there a possibility that there is a young female fighter in training that could potentially becoming greater boxer than Shields?

“There could be a 10-year-old girl that is watching Shields and might be and possibly perform a thousand times better than (her) in the future.”