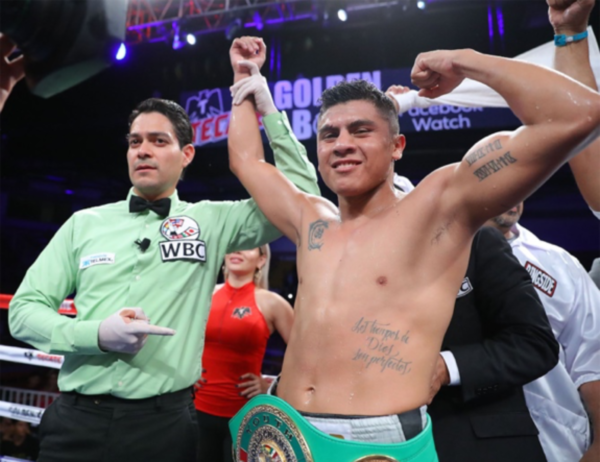 There’s a hot junior welterweight prospect with charisma and a ton of confidence.

His name is Luis Hernandez.

The undefeated upstart inked a five-year pact with Golden Boy Promotions in December and kicked off their new relationship with a third-round knockout of Colombia’s Placido Ramirez in March.

“Golden Boy Promotions is one of the best in boxing,” Hernandez (21-0, 19 knockouts) said through an interpreter. “Alongside my manager Vincent Ruiz, we finally achieved this goal together, and I feel more supported in my fights with Golden Boy.”

For Hernandez, who went 63-10 as an amateur before turning pro in 2015, his dream is to be recognized by a major player in boxing. He is eager to fulfil his potential and show the world just how skilled he is inside the squared circle.

When asked to describe his emotions when Golden Boy initially informed him of their interest in signing him to a promotional deal, Hernandez described the fire that lit inside of him.

“I was very happy,” Hernandez said. “I have always been motivated. And that’s what a boxer wants – to sign with a big promoter like Golden Boy – and now I’m even more motivated to keep going in the sport of boxing and win world titles. This is only the beginning.”

Josh Taylor and Jose Ramirez are both undefeated unified titleholders at 140 pounds. Taylor (16-0, 12 knockouts), 29, of Scotland, owns The Ring Magazine belt, along with the IBF and WBA titles. Ramirez (25-0, 17 knockouts) is a 2012 Olympian, who holds the WBO and WBC titles and is ranked No. 1 at junior welterweight by The Ring.

However, Hernandez was also candid about another topic.

“I need more fights,” he continued. “With the issue of COVID-19, it has been tough to keep up, but I need more activity, more fights, and then hopefully by next year, if given the opportunity, I feel like I could beat them both.

“The coronavirus has affected me, but I’m still training, still running,” he explained. “I’m trying to do what I can in a responsible manner, following the laws and the norms from our government, and preparing for anything that comes our way. Once this virus passes, I’m going to be ready.”