Michael Conlan: The story so far 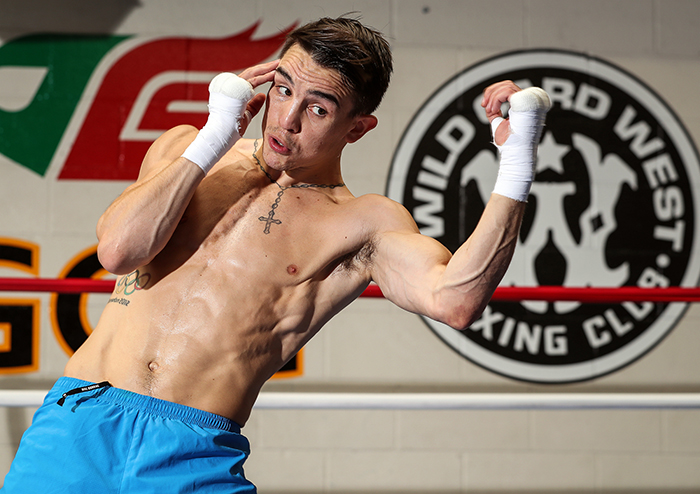 He could see “Benny Blanco from the Bronx.”

“I was in a TV station and I forget his name but he was in Carlito’s Way. He was in the studio as well!”

Michael Conlan’s fight week for his professional debut was not typical of what we’ve come to expect for most first-timers. Job done, no slip ups and move on to fight number two would be a satisfying conclusion for the average debutant.

It was Thursday, March 17, 2017 and the Northern Irishman was on Good Morning America. Bright, shiny, happy people ready to entertain viewers over bagels and orange juice. Benny Blanco (A.K.A. John Leguizamo) was a guest, and Conlan, who should have been resting, carrying out his normal routine, and counting down the hours till he made weight for his maiden bow against Tim Ibarra.

“I was tired and I’d been doing shit-loads of media,” Conlan,28, told The Ring. “It was a blessing in disguise that it was like that because it kind of prepared me for what it would be like for a world title fight. All my fights have had loads of media, hoopla and hyperbole. I’m used to being in the spotlight. Some people under the lights don’t perform, but I’ve been put under the lights from the start, so it’s going to benefit me in the long run.”

The following night at the Madison Square Garden Theater, Conlan, accompanied by Conor McGregor, walked out to a reaction that some fighters will never experience. The well-known controversial story of Conlan at the Rio Olympics in 2016 and the loss to Vladimir Nikitin had taken his popularity to stratospheric sporting levels. Add a passionate and seismic UFC following from Ireland, and the backing of Top Rank, and it was clear that “The Conlan Revolution was going to look and sound different to that of most fighter’s careers.

“It was a crazy night and as soon as I walked out that was it. I was like ‘I’m home,’ it was unbelievable.” 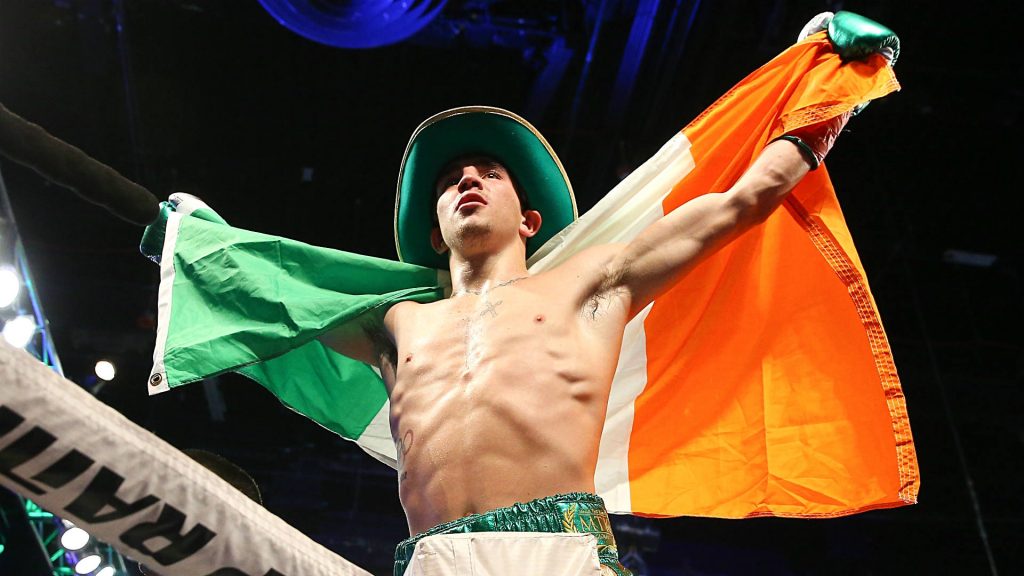 MSG and New York are becoming a second home, and a popular destination, for the career of Conlan and his support. Chicago, Brisbane, Las Vegas, Manchester and Belfast have all felt the Conlan effect, ensuring that plenty of highs have been experienced during the adventure. But with highs come lows, that’s inevitable regardless of the machine that is built around a popular and gifted fighter. And while lows have been few, the impact was enough for him to be self-critical, analyze and adjust.

“I fought someone who was terrible and I stopped him in the third round but I just didn’t seem to click at all,” says Conlan of his second outing against Jose Alfredo Flores Chanez.

“When I got to the afterparty, I didn’t even have a drink, I just sat there. I went back to the hotel and woke up at 6 a.m. and went straight on the running machine, started training right away because I needed to be much better. It was terrible, it was disgusting, it really annoyed me. There haven’t been many lows but that was one of them. But it worked [in my favor] because it made me get up right away the next morning and train.”

Conlan has become a more complete fighter since then. Teaming up with Adam Booth has added to the high skillset that was already there from his days winning an Olympic medal and multiple amateur successes prior.

He looks back at the early days as a pro and sees a novice. In his mind the performances should have been far better; he should have picked his shots more and used his pedigree to make an even bigger impact in the ring.

“I think going out to LA for the first year of my career was very much needed because I needed to learn that inside game, that Mexican style of boxing,” he said, thanking and acknowledging the part played by original trainer Manny Robles.

Conlan was pleased with his inside game when he got the opportunity to add an epilogue to his story in Rio. Defeating Vladimir Nikitin in December of last year corrected a wrong that, while not vital for Conlan, proved the level that he was at and reminded us of the color of medal he should have received in his 56kg bantamweight loss four years ago.

“If it hadn’t happened after it was cancelled in Belfast, would it have bothered me? No, because I wanted to move on with my career. I was done with the fight to be honest,” he said of the rearranged bout that was meant to take place in August last year. 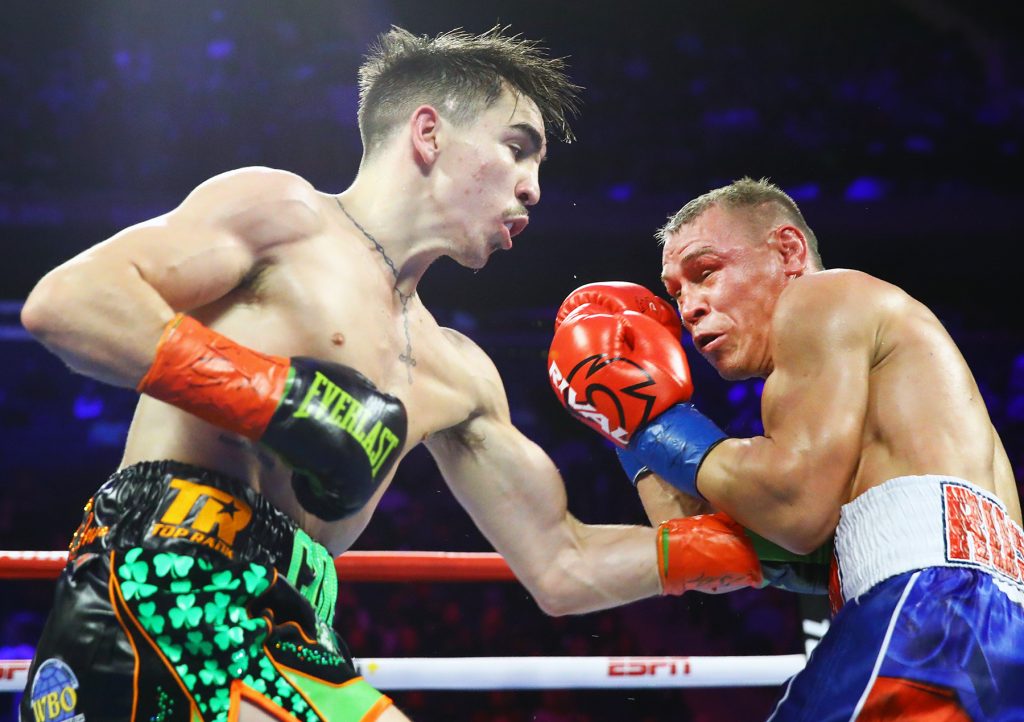 Conlan goes to the body of Nikitin. Photo by Mikey Williams/Top Rank

Conlan’s mind and ability appear to have been a perfect match for what has been thrown at him from his first night at Madison Square Garden right through to gaining revenge over Nikitin. Before vengeance there was magic and magnificence at Falls Park in Belfast that August night when it was Diego Alberto Ruiz who stood in for the Russian.

Epic does not begin to describe what was witnessed as Conlan stood on the stage ready to walk to a boxing ring in a sold-out purpose-built arena just a few minutes from his mother’s house.

“I didn’t have a fucking clue what I was doing,” Conlan laughed remembering himself up on that stage.

“I was standing there thinking, ‘What the fuck do I do now?’, so I just put my arms up in the air. I wanted to laugh but I didn’t want to laugh because I wanted to look serious. It was like Talladega Nights, ‘What do I do with my hands!’ That park is three minutes out from my ma’s house, somewhere I’ve grew up, somewhere where I’ve had many fights and never been paid in my life. The fans, the singing, and the performance as well, I thought it was a very good performance when you take everything into consideration. Someone who has only had that many fights and who has been in the public, coming out in his home park, sold out in a purposely built arena, that’s a lot of pressure. I’ve shown time and time again that I can deal with these situations. It’s all good for the future for when the big one comes.”

Conlan is now ranked No. 1 with the WBO and No. 3 with the WBA. The biggest obstacle between him and a world title shot is the ongoing COVID-19 pandemic. Fighting for his first championship behind closed doors isn’t his preferred choice, give what he is accustomed to, and to have his thousands of fans celebrating with him would cap off a memorable first act to the Michael Conlan story.

“I’ve boxed in many an empty arena in the amateurs,” said Conlan, insisting that the change would not deter him. “Big competitions like the Europeans in the back arse of nowhere and there’s no-one there to watch you but it’s a major competition. It’s not something that’s going to bother me. It’s where we are right now and we can’t really complain. But my fanbase is probably one of the best in the world and I’m so grateful to have that.”