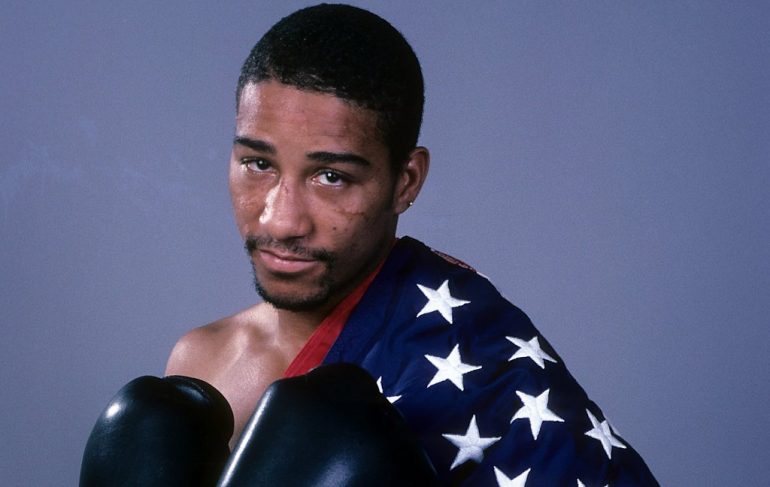 Photo from The Ring archive
07
May
by Anson Wainwright

Kennedy McKinney captured an Olympic gold medal at Seoul 1988 and went on to enjoy a successful professional career despite being hindered by drugs.

McKinney was born in Hernando, Mississippi on January 10, 1966, and was one of nine children. His parents split when he was young and his mother moved the family to Memphis.

One day, a friend of McKinney’s older brother, Kevin, came to the house.

“I noticed his friend had a gym bag in his hand,” McKinney told The Ring. “When I went into the house to get my brother, he [also] had a gym bag and I knew they were getting ready to do something fun.

“I said, ‘Hey man, let me go with you.’ He said no, but I ended up following him anyway. They didn’t know I was behind them. I followed them to the boxing gym, waited for a while and went in.”

McKinney, who had a lot of energy as a child, loved the new environment and excelled. He later graduated high school in 1984 and, within 30 days, enlisted in the military.

“I found a magazine that had two boxers on the front cover,” McKinney explained. “I didn’t know the military had a boxing team, so I got in touch with my coach and told him I wanted to be on the team. He knew a coach in Texas, Kenny Adams. and told him, ‘There’s a kid called Kennedy McKinney stationed up in Maryland that can fight. Put him on your boxing team.’ Coach Adams looked into it and got me on the boxing team.”

After leaving the services, McKinney lived in Killeen, Texas. Adams took him under his wing and convinced the young fighter to go to Russia for an international tournament. That move would eventually lead to McKinney earning himself a spot on the 1988 U.S Olympic team, which also included Riddick Bowe, Roy Jones Jr. and Michael Carbajal.

In Seoul, McKinney won all five fights and took the gold medal, a moment that he’ll always be proud of.

McKinney had somewhere in the region of 300 amateur fights before turning professional with Top Rank. He made his debut on the undercard of Roberto Duran’s middleweight title triumph over Iran Barkley in February 1989.

By early 1992, McKinney had moved up the ranks. He bested Sugar Boy Rojas to win the USBA junior featherweight title and defended it against Paul Banke.

Later that year McKinney would find himself in against IBF 122-pound titleholder Welcome Ncita. The American scored a highlight reel knockout to claim the title and followed with five successful defenses.

McKinney was then linked to a unification bout against fellow American Tracy Harris Patterson.

“We wanted to fight each other,” McKinney said. “Both of us could have made a lot of money, but I don’t think his dad [former two-time heavyweight champion Floyd Patterson] wanted me to fight him. He knew I was going to put him to sleep.”

Any hope of the bout taking place went up in smoke when both men surprisingly lost their titles within six days of each other in the summer of 1994. McKinney dropped his belt to Vuyani Bungu in what was later named The Ring Magazine Upset of the Year.

Subsequent world title loses to rising star Marco Antonio Barrera – on the debut episode of HBO’s Boxing After Dark series – and Bungu in a rematch appeared to signal the end of the American’s career.

However, in December 1997, McKinney was brought in as fodder for the excellent Junior Jones, who had beaten Barrera for the WBO junior featherweight title and repeated the result in a rematch. McKinney survived a knockdown and shocked a pro-Jones crowd with a stunning fourth-round stoppage. That bout was chief support to Prince Naseem Hamed’s U.S. debut against Kevin Kelley.

The new titleholder had hoped to parlay the win into a fight with Hamed, who defeated Kelley in a featherweight classic, but that bout never took place.

McKinney lost his title to Luisito Espinoza, who stopped him in two rounds. He fought on, sparingly, over the next few years before retiring with a record of 36-6-1 (19 knockouts) in 2003.

McKinney’s storied past with drugs is his biggest regret.

“I was messed up for a long time,” he acknowledged. “When I would knock a guy out, I would have a couple of months off and I did [drugs]. That’s the only thing about my career [that I regret], I wish I hadn’t taken drugs.”

McKinney, now 54, lives in Olive Branch, Mississippi. He is divorced and has two grown up sons. The former two-time titleholder is going to build a house on land that his family owns in the coming months. He has been drug-free for close to 30 years.

Here’s what he had to say about six of his most memorable nights in the ring:

“I’m a Godly man. If you look at my journey in the Olympics, I have a number on the back of my jersey 03:16. John 3:16 in the Bible says, ‘For God so loved the world, that he gave his only begotten Son, that whosoever believeth in him should not perish, but have everlasting life.’ When I realized what the number I had on the back of my jersey meant, I was like, ‘God’s with me.’ He gave me that number, that’s why I won the gold medal because I had faith in my lord. The whole team were rooting for each other. It was an easy fight; he went the distance but got beat up. [When I went back to the corner at the end of the fight] Kenny Adams said to me, ‘Good job.’ I can’t really describe the feeling that you have when you win a gold medal. God gave me the power to do the things I did in the Olympics. I was the man who was supposed to win the gold medal.”

“I trained in the mountains in Big Bear, California, where I trained for all my championship fights. The altitude gives you greater energy levels and when you come down to this level, you don’t get tired in a 12-round fight. He was too short, that’s a simple fact. Once I realized he was smaller, I kept him behind the jab and outboxed him. He was a good fighter, but I had a little reach and height advantage and that’s what I used in the fight. I’m a smart guy, I was a smart boxer, so I took advantage of weaknesses. I jabbed the shit out of him.”

“I was losing that fight until I dropped him with a right hand. I put him to sleep. I was losing and I knew that. Pow! I set the jab on him and, crack, I knew it was over. I had a knockout before like that when I was defending my USBA title against Jerome Coffee. I put him to sleep the same way. Face first, face planted in the canvas. I thanked God for the Olympic gold medal and this championship. My family set up a party for me when I came home. I enjoyed it, it was great. I worked my ass off, I trained all my life [for that moment].”

“In the first round, I figured out Salud was too short. Once I figured that out, I just jabbed the shit out of him and beat him with the right hand all day long. That fight was easy for me: jab, one-two, skills pay the bills. I had longer arms than Salud, but he could take a punch. I jabbed him in the belly, jabbed him in the head. It was a very good win because he had some experience, he had a name, but I was in my prime.”

“I didn’t even know the guy. (Promoter) Akbar Muhammad came to me and said, ‘Fight this guy.’ I was like, ‘He’s champ, lets fight.’ I didn’t really study him, or look at him on tape, and that was one of the mistakes I made. If I had studied him, I would have seen that left hook to the body that he kept catching me with. The buildup wasn’t a big deal, I had been to the Olympics and won a world title. It was just a fight; he was no big deal to me, I wasn’t scared. It was an opportunity to make that money. Look at that fight and count the low blows Barrera hit me with and the referee never called one low blow. He should have been disqualified. I dropped him in the 11th, but it wasn’t a big moment because he stopped me right after that.”

“We talked shit to each other. I told him, I was going to knock him out, he told me he was going to knock me out, I said, ‘OK, we’ll see’ and I was right [laughs] because I had studied him. It was a simple fight. I always found a weakness in an opponent’s fighting style when I watched tape. Junior Jones’ weakness was that he couldn’t go to his right – he went left all the time. I saw that. I thought if I cut him off and throw the right hand, I’ve got him. That was the game plan, step right, throw right and it worked [laughs]. He walked right into my right hand. Remember, Barrera beat me, Junior Jones beats Barrera twice, then Kennedy McKinney knocks out Junior Jones. If I’m not a hall-of-famer, who is?”