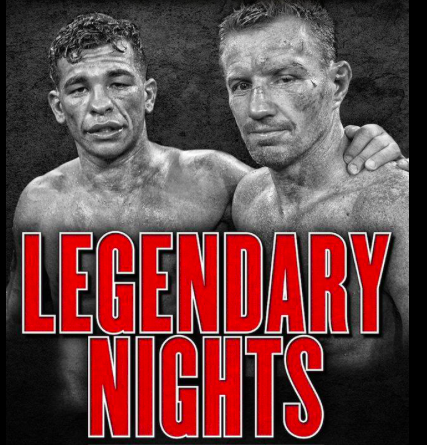 05
May
by Michael Woods

It was the most thrilling prize-fight I’ve had the pleasure of attending. Please don’t tell anyone from Team Gatti, but I was rooting for Micky Ward going into the May 18, 2002 scrap at Mohegan Sun which pitted the fighting pride of scrappy Lowell, Mass. against Arturo “Thunder” Gatti.

Anyone that pondered watching, but dismissed the opportunity, because they accumulated some Ls between them, well, hopefully they learned a lesson about pre-judging.

Two men who could be relied upon to give all of themselves in a contest, two athletes who could both boast, though they wouldn’t, because of a certain majestic humility in both, that they’d be a threat to spring a comeback until the final ping of the final round’s bell.

Ward and Gatti, linked for the ages, collided in a Connecticut ring, and on HBO, and if Mother Earth allows, people will note the 100th anniversary of this contest, because of all it embodied. 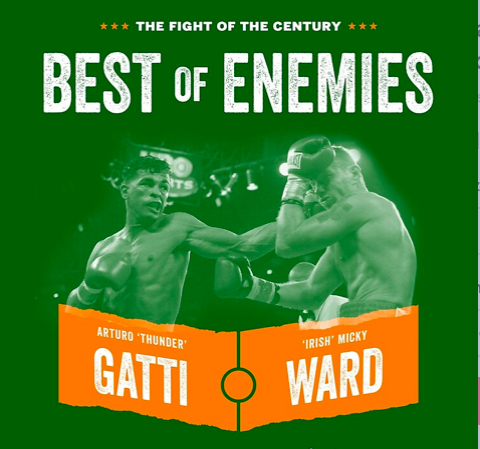 Were expectations going in high? In certain circles, sure. The types of people who know that a match between two guys not on the ‘A list’ might be more likely to over-deliver, as opposed to a more heralded match involving people with more gleaming records…They had a gut feeling that this one could be well worth the investment of staying up past midnight. Being a fellow “Mass-hole,” I hoped the guy who dropped the ‘Rs’ would pull off one of his underdog specials.

Both possessors of more than ample grit, and a stubbornness well suited to making Fights of the Year. Ward and Gatti could both ignore pain in the quest to persevere, to fulfill the silent contract they always made good on, and because of that,  the traded punishment and reminded any boxing fan who’d grown weary of the usual hijinks of this sport that can be so silly, that THIS is why we watch.

The first faceoff gained Fight of the Year honors from the Boxing Writers Association of America. HBO showed the 36 rounds, and there are worse ways to chew up some quarantine time than watching the trio. You will see what made Ward tell Ring’s Anson Wainwright that Arturo was the strongest opponent he faced. “I fought a lot of guys who were strong but if I had to pick one – Arturo. He had a good left hook. Arturo put everything into his punches, never worried about getting hit back,” Ward said. “He didn’t care.”

If you haven’t ever seen the matches, here’s a recommendation. You can watch the HBO production of “Legendary Nights: The Tale of Gatti-Ward,” which is streaming 24-7 on HBO On Demand, HBO NOW and HBO GO. That will offer you both the thrills, and flesh out context for you.

Need a teaser taste first? Here is the appetizer to the entree.

Here is a deeper dive into Round 9, when the violence was majestic, because it was summoned by two members of a small tribe, people knew exactly what they were getting into, the pain that was promised, and had zero complaints or reservations.

By now, are you on the fence? Lou DiBella was an executive at HBO during some Golden Era times over there.  He promoted Ward, and all three Ward-Gatti punch outs. What would he tell someone who has no concept of this rivalry that promises to be among the sports’ most enduring.

“It effectively tells the story of one of boxing’s most memorable and punishing trilogies,” DiBella said. “It explains why these battles earned iconic status and how two legendary blood and guts warriors became blood brothers and true friends.”

I watched the documentary effort when it came out, in 2013. And I asked Ward, at the time, to give his take on the filmed analysis of the first installment of their three fight storybook.

“It was very emotional for me but it was about the friendship, the love we had for each other,” said Ward, then 48 years old.

They became friends, you know, these guys that tried for 36 rounds to remove the head of the man trying to do the same from two feet away.  “It’s respect,” Ward said. “I wanted to beat him so bad, he wanted to beat me so bad, but it’s mutual respect.” 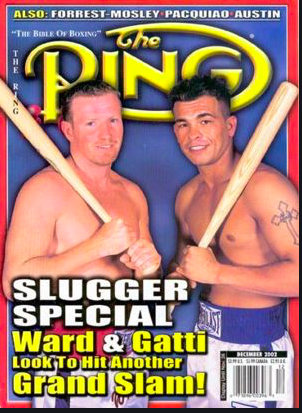 This issue hit the newsstand before the second scrap, which combusted on Nov. 23, 2002, at Boardwalk Hall in Atlantic City, which was pretty much Gatti’s house.

End note: As fate would have it, the next issue of RING will feature a deep dive into one of boxing’s most compelling rivalries, the Ward-Gatti storyline.

Indeed, I myself subscribe to the mag, and encourage everyone to do so, because that encourages journalism as a whole, and helps keeps the lights on.

End note 2: I rooted for Ward then, and still to this day, the same. He deserves to have fate shine kindly on him, for all he gave of himself in the ring. Listen to Mick talk about dealing with lasting effects from his ring wars here on the Everlast Talkbox podcast.