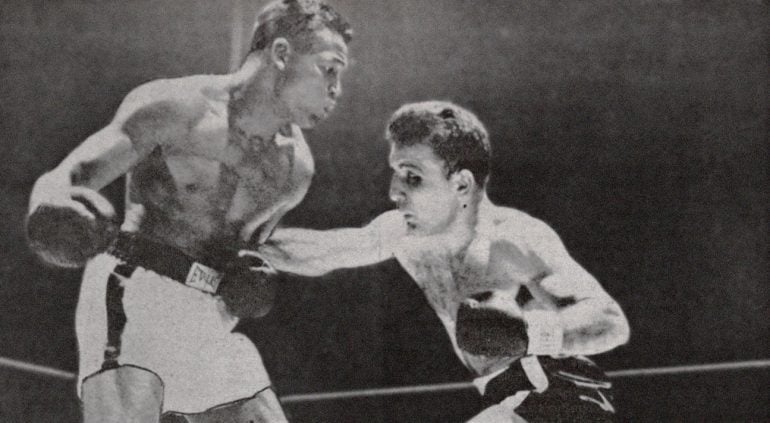 Photo from The Ring archive
05
May
by The Ring

Editor’s Note: This feature originally appeared in the April 1951 issue of The Ring Magazine.

RAY ROBINSON’S decisive victory over Jake LaMotta in the thirteenth round of their middleweight championship fight in Chicago on the night of Wednesday, February 14, by what Illinois rules call “a technical knockout,” was a tremendous break for boxing. It has stirred three classes.

In the first place, it shifted the middleweight title, and stirred up action in that class. The fight unfroze the division.

In the second place, it left the welterweight championship of the world open. Robinson abdicated as welter king just as soon as his achievement of the middleweight title became official. That was the agreement.

In the third place, it aminated the light heavyweight class, in which Joey Maxim has been playing solitaire.

Now we are to have a series of welter eliminations involving, in the order of their ranking by The Ring Magazine, Kid Gavilan, of Cuba, Billy Graham, New York, Charley Fusari, New Jersey, Johnny Bratton, Chicago, Eddie Thomas of England, and possibly Johnny Saxton, Robinson’s Harlem protégé.

Robinson may not be content with defending the middleweight title.

It is conceivable that Sugar Ray will try for a match with Joey Maxim. He is eager for such a fight. 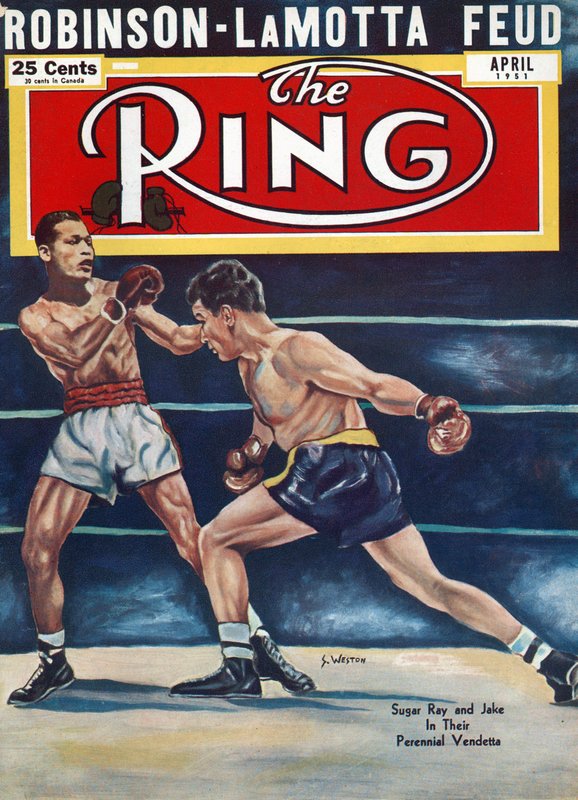 Also in the offing is another, a seventh meeting between Robinson and LaMotta, who definitely is a middleweight no longer, and now will go into the light heavyweight division.

In the middleweight class, with LaMotta eliminated by the weight situation, Robinson is confronted with the title ambitions of France’s Laurent Dauthuille, who last summer had Jake whipped in the fifteenth, but was stopped in the closing half minute, Dave Sands of Australia, triple champion Down Under, Randy Turpin of England and Gene Hairston of New York.

What with one thing and another, Ray’s victory over LaMotta gave the game about as glorious a shot in the arm as anything that has happened since Ezzard Charles trounced Joe Louis. In fact, Robinson’s success should spur even more important developments.

Boxing’s greatest triumph since Henry Armstrong defeated Barney Ross to win the world welterweight title was achieved by Sugar Ray when he halted Jake before 14,802 persons who paid a gross of $180,619.64 to see two champions fight it out.

Although Ray had to relinquish his welter title after he had won, under an agreement with the Illinois Boxing Commission and the N.B.A., his name will go down in the records of pugilism as a boxer who held both welter and middleweight crowns at one time.

Ray lived up to the expectations of those who made him an odds-on-favorite to dethrone the Bronx Bull.

The match had been hailed as promising the outstanding ring battle of recent years, and so it proved, to the thousands who crowded the Chicago Stadium and the millions who viewed it on television. The bout will go down in ring history as a truly great performance by a slugger and a scientific boxer.

Jake’s bulldog rushes were in evidence for ten of the thirteen rounds, and during that period, though LaMotta was behind on points, in the press rows, he did considerable damage to Ray.

In fact, the officials thought so well of Jake’s work that they had him in the lead at that point. But at no time after the tenth did LaMotta have a chance. He had shot his bolt. His steam was gone and his body punching had lost its effectiveness.

It didn’t take Sugar Ray long to take advantage of the collapse of his opponent. Robbie cut loose with face and body blows that soon had LaMotta groggy. But no matter how many punches Robbie tossed he couldn’t down his rival and Jake was able to quit the ring with the boast that throughout his career he never had been knocked down.

Under Illinois regulations Robinson got credit only for a “technical knockout,” but no man ever was more clearly out than LaMotta when referee Frank Sikora stopped the contest. 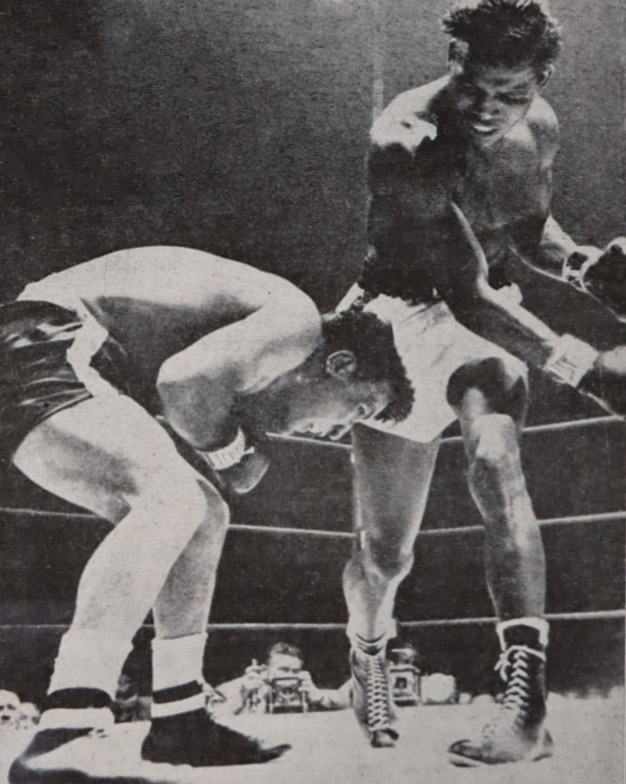 COMBINING skill and superlative punching power, using a left with devastating effect in almost every round, Robinson excelled the defending champion in every department.

Ray gave one of the most masterful exhibitions seen in a ring for years and left no doubt in the minds of the fans that he is, what so often has been said of him, the greatest fighting machine of the age.

In the final round, so severe a shellacking did LaMotta receive that shouts of “stop it,” rent the air. The referee wasn’t guided by those voices. He took cue from Dr. Houston, medical advisor to the commission, and halted the slaughter. Such it was in the last stages of the affair. It was a massacre of one of the sturdiest, hard-hitting middleweights the division has had.

Jake, a great money fighter, found his master in Ray, who made it five out of six in their series. In their previous battles, Jake put on the pressure when the going was against him. On this occasion the scientific work of Robbie took all the starch out of the champ and he couldn’t come through.

Nor could Jake, as in many of his past bouts, play ‘possum.’ He didn’t get the opportunity. Sugar Ray’s left was too busy and too effective to have the defending titleholder think of trickery. He was too much engaged in trying to check the blows of his opponent. Jake didn’t have to feign exhaustion. Robbie’s pace took care of that.

Robbie’s polished, rhythmic punching turned the trick, though he took many hard blows that checked his advance and slowed, and at times, jarred him. He had no picnic though one wouldn’t believe it watching the show on television or reading about the defeat of the Bronx Bull. 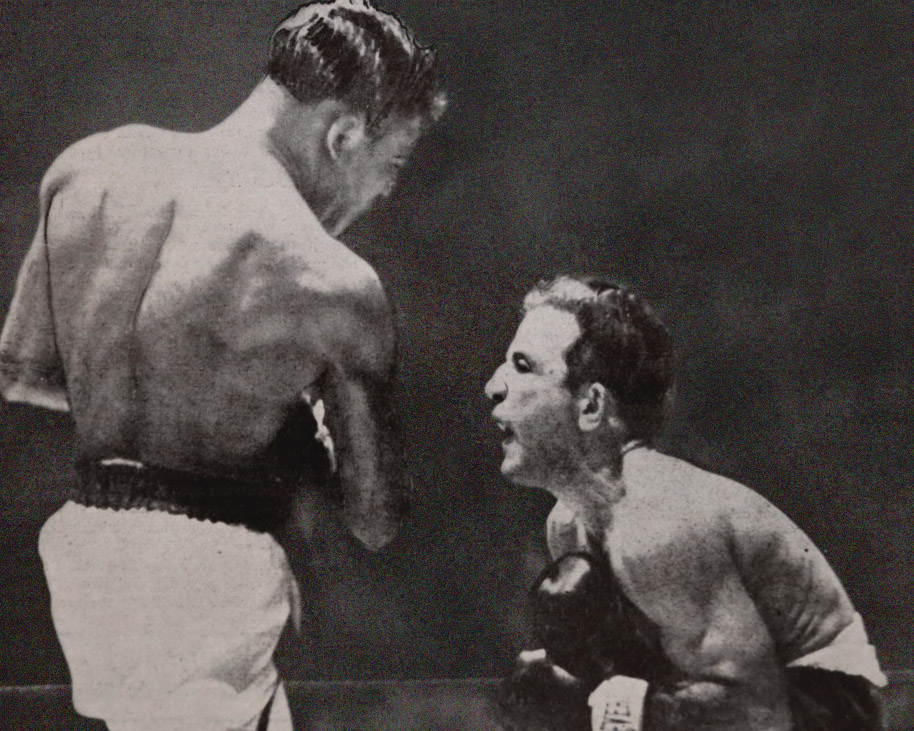 SO EFFECTIVE was Robbie’s left that in one round I counted twenty-six safe shots in the first two minutes. He pelted Jake in every session. Only when he was hard pressed, especially in the third and eleventh, was Ray forced to let up because of Jake’s body attack, but he quickly regained his wind and then the bombardment continued. An uninterrupted volley of lefts and rights to face and head dazed Jake.

The accuracy of Ray’s delivery was reminiscent of Benny Leonard, Barney Ross, Packey McFarland and Mike Gibbons at their best. The tense gathering, Chicago’s contribution to boxing’s stride towards normalcy, paid enough dough to see a good fight and the fans weren’t disappointed. It was one of the best battles in recent years and will take its place among the never-to-be-forgotten fights.

Jake never dreamt that he would be forced to take such a shellacking from the man whom he had dodged for many months since winning the crown from Marcel Cerdan.

There were times when Jake stood out as Ray’s master, but not for long. I gave Jake only three rounds and called one even. My point score agreed with that of Judge Eddie Klein, 70 points to 50. The rounds which Jake won brought the fighters on even terms when the eighth got under way. After the ninth it was Robbie all the way.

In only one session, the eleventh, did it appear that Jake would down Ray. He had the Harlemite in a corner and flayed way with both fists. But most of the punches failed to land and after Robbie had ducked out of the trap he cut loose on his own and took the round by a safe margin. 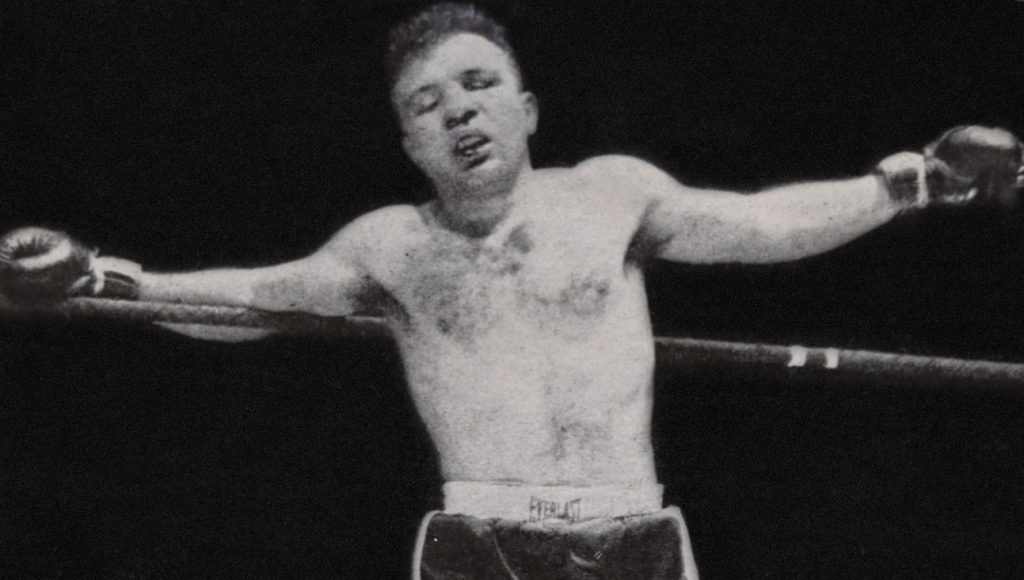 FROM then on, a disconsolate, tired, helpless Jake took severe punishment without meting out any.

In the twelfth round LaMotta landed only nine blows, none of which was of any consequence. In the final frame he connected only five times as against 56 jabs, hooks and uppercuts scored for his challenger.

Never had Jake been subjected to such severe punishment and he admitted after the fight that Robbie had not only given him his toughest battle but had hurt him more than had any other opponent in his long career.

What Sugar Ray dished out in the final two frames was a reminder of the punishment Max Schmeling received at the hands of Joe Louis in their second fight.

Jake was staggered. He couldn’t defend himself because he could scarcely raise his arms. He must have realized in the eleventh that his number was up.

LaMotta was slugged, flayed, jabbed and upper cut. He was slashed over the cheek bone. Blood flowed from his nose and mouth. His eyes were dimmed by constant pecking by Sugar Ray. The bridge of his nose was injured and he could scarcely stand erect. He was definitely out on his feet when the referee interceded.

Regardless of the shellacking LaMotta took, the fight was a thriller. Jake gave all he had while he could and no one could find fault when he meekly submitted to the referee’s decision. It was as it should have been. There was no use carrying on under the circumstances.