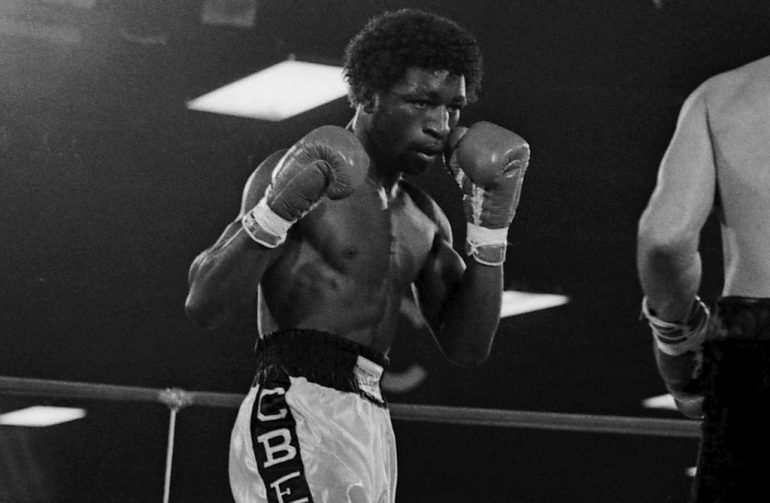 Photo from The Ring archive
04
May
by Anson Wainwright

Skilled boxer-puncher Cornelius Boza-Edwards was a mainstay in the junior lightweight and lightweight divisions during the late-1970s into the mid-1980s, winning the WBC 130-pound title in 1981.

Boza-Edwards was born in Kampala, Uganda on May 27, 1956. He was the eldest of five children and lived through difficult times.

“The military were fighting over the ruling of the country, but as kids we don’t fully understand,” Boza-Edwards told The Ring. “A lot of people were getting killed. Before Idi Amin there was another guy, Milton Obote, who was President, but when Idi Amin came along there were tanks all over the town, shooting and killing people.

“The boxing program was great. Guys like Ayub Kalule, John Mugabi and myself, we were in junior tournaments. I was No. 1 in the country, but we didn’t fully understand how far we could go.”

The atrocities that took place in Uganda forced his mentor, Jack Edwards, who was English but owned a tea plantation, to leave the East Africa country.

When Edwards returned to England in 1972, Boza joined him and was later adopted by Edwards adding his managers name to his.

Boza-Edwards was a successful amateur. He fought on the English team but couldn’t fight for them at the 1976 Olympics because he wasn’t a national. However, when Uganda didn’t have a featherweight representative, they reached out to check his availability.

“They picked me up in Heathrow and we went to Montreal,” Boza-Edwards said. “We had weighed in and saw the guy I was going to fight. That evening the Africans boycotted the games. I sat in the arena, they called my name and I couldn’t go because Africans weren’t allowed. They called the other guy and the referee lifts his arm. It was so annoying, I lost without fighting.”

With an amateur record of roughly 82-2, Boza-Edwards returned to London and signed with Mickey Duff. He made his professional debut in December 1976.

The Uganda-born fighter won his first nine paid outings before losing on a cut to one Des Gwilliam. He quickly got back to winning ways, however, and gained valuable experience traveling with Duff. By the summer of 1980, he had moved his record to 27-1 and was in Las Vegas with his manager.

“We were at the swimming pool,” he explained. “I think Ruben Castillo was supposed to fight Alexis [Arguello] and he pulled out. [Legendary ABC sportscaster] Howard Cosell happened to ask Mickey Duff, ‘What about that kid you have?’ and that’s how I got the Alexis fight. Within three days we had to make weight and fly to Atlantic City to make the fight.” 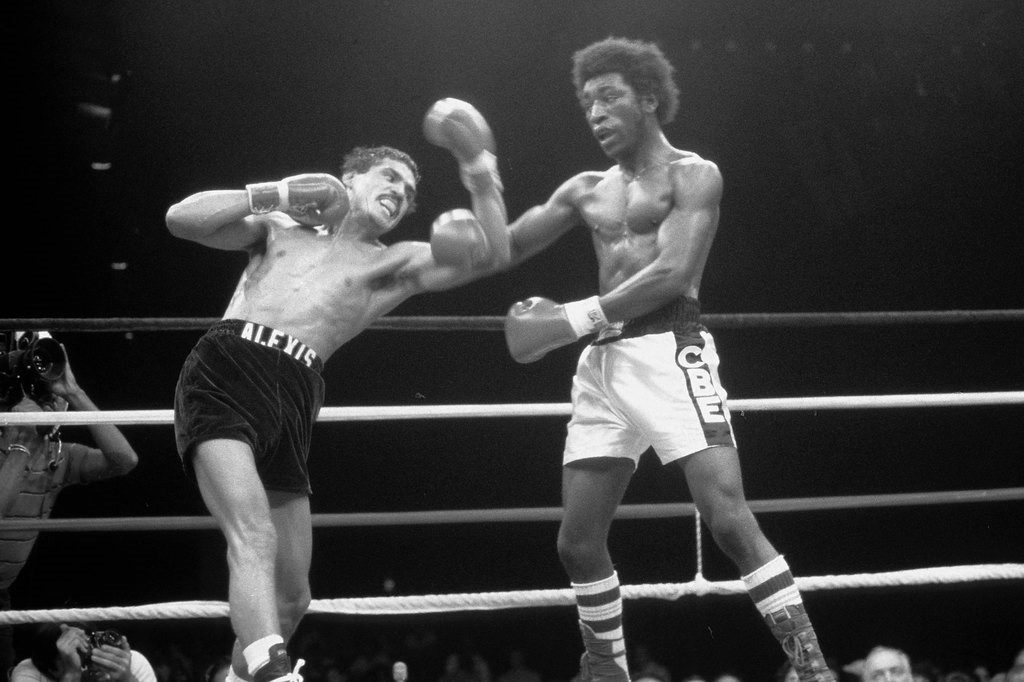 Boza-Edwards (right) at war with the great Alexis Arguello. Photo from The Ring archive

Although Boza-Edwards was stopped in eight rounds, he made an impression.

“That fight opened the door for me,” said the ex-champion, who was hurt to the body several times. “I learned something from the Alexis fight.

“When I got back to London, you saw me do so many push-ups [to develop core strength]. I had two tuneups and we were fighting [Rafael] ‘Bazooka” Limon [for the WBC junior lightweight title]. He hit me with bodyshots [early] and assumed he could [hurt me to the body]  in the 13th and 14th rounds – I just laughed at him.”

Boza-Edwards dropped Limon in the fifth and ran out a convincing winner, claiming the title by 15-round unanimous decision.

In May 1981, Boza-Edwards stopped Bobby Chacon in the 13th round to retain his title. He was then set to resume hostilities with Limon when the Mexican pulled out and was replaced by unknown Filipino Rolando Navarrete. It proved to be a change for the worst and Boza-Edwards was shockingly stopped in the fifth round. 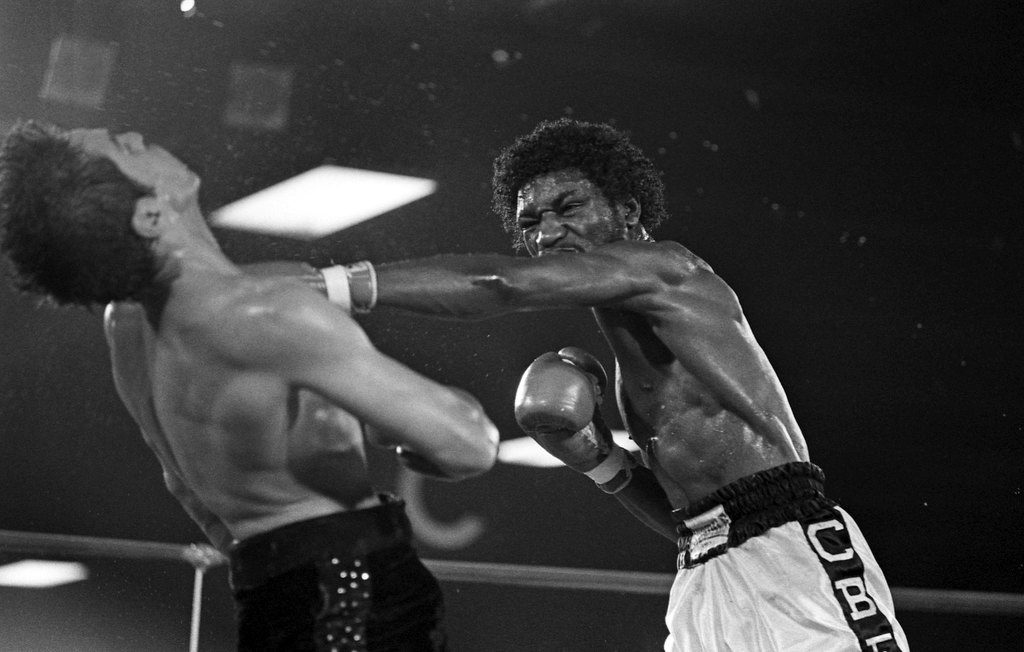 Boza-Edwards nails Bobby Chacon with a left hand. Photo from The Ring archive

During his down time, he married his first wife Jackie, who tragically passed away due to kidney failure.

The former titleholder relocated to Las Vegas and scored seven straight wins before signing on for a second fight with Chacon, who was stripped of his WBC title for refusing to face Hector Camacho.

Both men were on the canvas but Chacon edged proceedings in The Ring Magazine Fight of the Year for 1983.

Boza-Edwards fought on but lost decisions to Rocky Lockridge and Hector Camacho. He was stopped by Jose Luis Ramirez in five rounds and didn’t fight again, retiring with a record of 45-7-1 (34 knockouts). 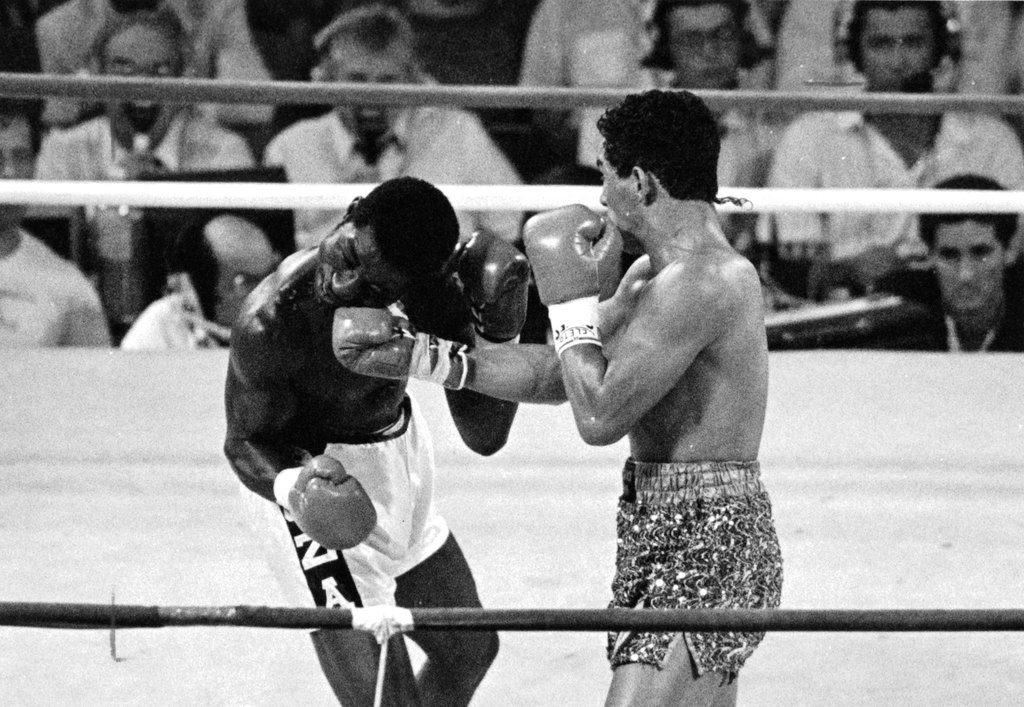 Boza-Edwards on the receiving end against Hector Camacho. Photo from The Ring archive

Former three-weight world titleholder Duke McKenzie trained with Boza-Edwards and is well aware of the boundless energy his friend possesses.

“Boza was like a big brother, he was a hard-nosed guy, he had everything, a real classy edge to him,” said McKenzie. “We trained at Johnny Tocco’s gym and it was a real education. Boza, John Mugabi, myself and a few others used to do roadwork together. Boza was an exceptional runner, so we’d do six miles in the early morning when it was still very humid.

“When we got back, sometimes Boza would go for another run. He used to take a relative’s Doberman with him. This one time, I remember seeing a silhouette walking toward me and it was Boza. He was carrying the dog (laughs) because he’d run the legs off it.”

Boza-Edwards, now 63, lives in Las Vegas with his second wife and has three children. Since retiring, he has worked with several world titleholders, including Orlin Norris and Frankie Randall. He trains out of the Mayweather Boxing Club. Away from the sport, he remains an excellent runner and has completed 19 marathons with his daughter.

BEST JAB
Alexis Arguello: He was taller than most of the guys I fought and, as you can see later on in his career, his reach was tremendous and he used it. He had very long arms and it was always difficult to hit him clean. It was a heavy jab.

BEST DEFENSE
Hector Camacho: I’d watched him many times and thought he had no defense, but he was very quick on his feet and difficult to hit cleanly.

BEST FOOTWORK
Camacho: He was on his toes, so quick in and out. He was very elusive. I remember in Round 6 my feet were blistered because I was so busy chasing him.

BEST HANDSPEED
Camacho: Hector had quick hands and so did Bobby Chacon. Hector had the quick feet to go with it. Bobby stood there and tried to exchange. “Bazooka” Limon realized he was losing the fight, so he picked up the pace with his handspeed in Round 8 all the way to the 14th. Of those three, Hector I would say [is fastest].

SMARTEST
Arguello: We took the fight at short notice but I was a lot younger. That was my first major fight in the United States. I thought I had the quickest hands and reflexes, but I was fighting an all-time great. He was able to hit me with uppercuts, left hooks, the same stuff I would use to hit other people with. He was too advanced.

STRONGEST
Rolando Navarrete: Rolando was short, looks small, but he’s physically strong. I found that out in the ring. I thought I’d beat the crap out of him, but you’re looking at a miniature [Manny] Pacquiao. Those Filipinos have legs like tree-trunks. He was the strongest in terms of strength and hitting power. You push him off and he’s not going anywhere. Jose Luis Ramirez was strong too.

BEST PUNCHER
Arguello: Bobby Chacon had dropped me, he had surprising attacks. Just when you think you’re going to have him out of there, he’s bleeding all over the place – bang – you’re on the canvas and the referee is counting. Lightning shots that you don’t expect. With Bobby and Alexis, you don’t see them. It’s like a trigger; you think you’re going to shoot and – bang – they shoot before you shoot. I would say Alexis because even though I didn’t go down, you could feel the impact – he hit me with some good uppercuts.

BEST BOXING SKILLS
Arguello: He had the height, his hands up, he would catch your jab and he would come over the top with a right hand, back with the left hook or uppercut. Hector wasn’t bad, he was quick. Bobby Chacon was very deceiving. Bazooka Limon, they were wild punches, you could see them and you tried to block them. Ramirez was difficult, he was methodical, like a tank, you could read him; not fancy stuff.

BEST OVERALL
Bobby Chacon: I would say Bobby, we fought twice. I beat him the first time, it seemed so easy. The second time, I think I won the fight and I didn’t get the decision. There’s good names in there like Jose Luis Ramirez, Alexis Arguello and people will say they were better fighters than Bobby Chacon but the difference is I prepared. I didn’t prepare that good with Alexis Arguello and Jose Luis Ramirez. I knew months in advance the [Chacon] fight was on. You have two, or three months prior to prepare. Those guys are better fighters than Bobby Chacon but prior to fighting them I did not prepare.