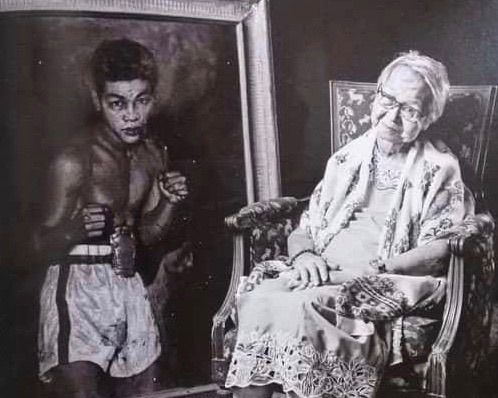 Laura Elorde sits next to a painting of her husband, boxing champion Gabriel "Flash" Elorde.
03
May
by Ryan Songalia

Elorde passed away of natural causes at 2:33 a.m., surrounded by family members in Paranaque City, Philippines, the family said.

Born Laura Sarreal on December 17, 1927 in Manila, she graduated from Far Eastern University with a double degree in accounting and education. She is related to two of the Philippines’ three International Boxing Hall of Fame inductees, having been the daughter of promoter Lope “Papa” Sarreal, a 2005 non-participant inductee who was credited in his IBHOF profile with introducing “big-time boxing” to Korea, Thailand and Japan.

Mrs. Elorde had been a school teacher before marrying one of her father’s fighters, “Flash” Elorde, in 1954, three years after he turned pro, and was by his side when he won the junior lightweight world championship in 1960 with a seventh round knockout of Harold Gomes at Araneta Coliseum in Quezon City, Philippines. Elorde would defend that championship for seven years, and was inducted posthumously into the Boxing Hall of Fame in 1993.

The Elordes had seven children – Gabriel Jr., Johnny, Therese, Marty, Rita, Cucuy and Malou – the latter of who died in 2015 at age 59. Several of them went on to join the boxing business as well, with Gabriel Jr., Johnny, Marty and Cucuy becoming promoters, and Johnny making a name for himself as an amateur boxer, winning gold at the 1979 Southeast Asian Games.

“Flash” Elorde’s death in 1985 of lung cancer did not spell the end to Mrs. Elorde’s relationship with the sport. She promoted dozens of boxing events, beginning in 1983 until 2010, with future champions like Luisito Espinosa, Gerry Penalosa, Dodie Boy Penalosa and Morris East appearing on her cards.

The fighter she had the most success with was Rolando Bohol, who had been trained by Flash before his passing and was managed by her son, Marty. Mrs. Elorde promoted Bohol’s pro debut at the Elorde Sports Center in 1984, led him to the IBF flyweight title in 1988, and promoted his first title defense a few months later against Cho Woon Park.

“Ate [Tagalog for big sister] Laura was just like my mother. I remember all good memories traveling together around world,” said Bohol, who now lives in Las Vegas. 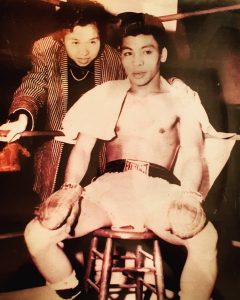 Mrs. Elorde was devoutly religious and would attend church each day and pray the rosary five times a day. After her husband’s passing, she would take her children to pray at the tomb of their father at Manila Memorial Cemetery, located across Dr. Arcadio Santos Ave. from the family’s compound.

Mrs. Elorde is expected to be interred next to his tomb on Wednesday, May 6.

Gabriel “Bebot” Elorde Jr. says his mother was far from just a casual observer of the sport, and would often take an interest in the young aspirants who would saunter into the old Elorde Gym, located on the family’s complex in Sucat, Paranaque City, where “Flash” used to prepare for his fights.

“Almost every day there were young boys who wanted to learn boxing. And she would tell the boxing trainers, ‘Teach that boy the right way to box,'” said “Bebot” Elorde, adding that she would pay for school tuition for some of the boys.

“My mom had a full life,” added Cucuy Elorde. “She had many good years. We plan to continue her charitable deeds. She has been very active in supporting a few orphanages and street children.”

Mrs. Elorde’s passing has drawn an outpouring of condolences throughout the boxing world, including from Mauricio Sulaiman, President of the WBC, which recognized Flash Elorde as its inaugural junior lightweight champion beginning in 1963.

“I had the great honor to spend many happy moments with Mrs. Elorde, a strong, powerful woman who was the leader of the Elorde family. She kept them united, a sensational leader who believed in the power of love,” said Sulaiman.

“This is the ending of a great cycle but is certainly the beginning of Elorde legacy for eternity.”

The family’s legacy can also be seen in the number of Elorde Gyms around the country, with approximately 50 in operation on the country’s northern island of Luzon.