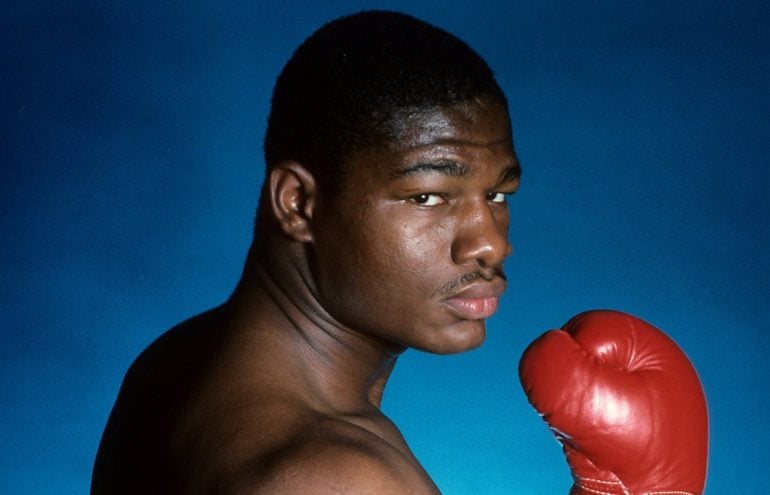 Photo from The Ring archive
01
May
by Anson Wainwright

Riddick Bowe might be most remembered for unfulfilled promise. “Big Daddy” certainly had his moments, though.

Bowe had all the attributes to become a great heavyweight – size (6 feet 5 inches, around 235 pounds at his peak), speed, athleticism, power and boxing ability. The only thing he seemed to lack in the end was a full commitment to the sport.

He first made a name for himself at the 1988 Olympics, when he was stopped by Lennox Lewis in the gold-medal match. Then, with the great Eddie Futch in his corner, he won his first 34 professional fights (29 by knockout) to become one of the more important figures in the sport.

That included the first loss in Evander Holyfield’s career, a unanimous decision in a classic brawl that made Bowe undisputed heavyweight champion and helped earn him Fighter of the Year honors in 1992.

Bowe about a month later infamously tossed one of his three belts – the WBC version – into a trash can rather than face amateur nemesis and mandatory challenger Lewis in his next fight. The two never fought, which was an unfortunate omission on the resume of both fighters.

Bowe arguably peaked in the first Holyfield fight. The overweight native of New York lost his two remaining titles in his rematch with Holyfield in 1993, another spirited fight known best for “Fan Man,” the rogue parachutist who landed in the ring during the fight.

In 1995, Bowe regained a major belt (the WBO version) by stopping then-unbeaten Herbie Hide in six rounds and defended it once against Jorge Luis Gonzalez before facing Holyfield once more in a non-title fight the same year.

This time Bowe, at a relatively trim 240 pounds, stopped Holyfield in eight rounds in another grueling fight and his last great performance.

Bowe was soon stripped of his WBO title for fighting Andrew Golota instead of his mandatory challenger, Alexander Zolkin. Two fights with Golota were among the strangest in boxing history, as the big Pole was twice disqualified for throwing repeated low blows. Golota’s actions sparked a melee after the first fight was stopped.

Bowe walked away from boxing after the second Golota fight only to return as a bloated version of himself for three unimportant fights in the 2000s before finally retiring for good. He made one ill-advised foray into Muay Thai in 2013 but was stopped in the second round. 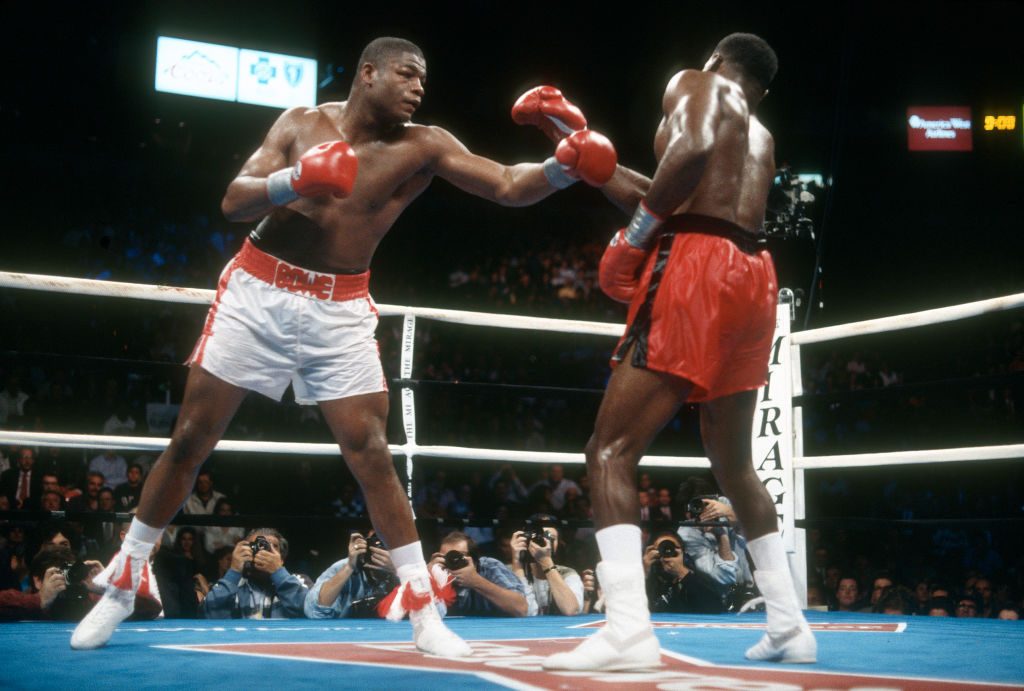 Bowe (left) at his very best against Evander Holyfield in their first fight. Photo by Focus on Sport/Getty Images

The 46-year-old resides in Fort Washington, Maryland, with his wife and daughter.

He was on tour in Great Britain recently when he agreed to discuss the best fighters he fought in 10 key categories.

BEST SKILLS
Evander Holyfield: He was better than anyone I ever fought. He could think, he could match wits with you. Our fights were so good because he could match me in the thinking aspect. He was always in such great shape.

BEST JAB
Pinklon Thomas: I guess he was from the old school. He came in with a great jab. He would throw a jab and snap your head back. … After that I would have to say Tyrell Biggs.

BEST DEFENSE
Holyfield: He had the best defense, the best offense. I mean hands down he made you work. If you weren’t in shape, it wasn’t going to happen.

BEST CHIN
Holyfield: I could shake Evander and he’d come back with four, five shots. And if you weren’t in shape, that’s when he was going to get you. He was always going to come back at you.

BEST PUNCHER
Herbie Hide: You’re not going to believe this [but] I would have to say Herbie Hide. … He hit me and I thought, “ Oh s—. I can’t allow this guy to hit me again because I don’t know what I’ll see next.” Initially I was trying to box him and he was real fast. I said I can’t box him because he got me beat, so I fought him.

FASTEST HANDS
Holyfield: I’ve got to go with the “Real Deal” again. Evander had not only great hand speed but he put something on it. In the third fight he knocked me down. What he did was throw a [relatively light] left hook and I was thinking, “ C ’mon man.” He threw another [weak] left hook and I was like, “ Really?” I didn’t realise that he was setting me up to relax. The third one he hit me with I seen the lights and the count. I’m like, “ Damn, he fooled me again !” I got up and shook it off. I think at that point he shot his load. He really couldn’t take me out like he wanted to. I [went] back to the corner, and I switched up on him and knocked him out.

FASTEST FEET
No one in particular: In that aspect there were a lot of guys I fought with real good feet. They didn’t want to be hit. I go back to Evander. When I had him in trouble, he had damn good feet. (Laughs.) I know one thing: When you hit him and hurt him like in the first fight, he was hard to catch up with. I truly believe it was because he was able to maneuver in such a manner.

SMARTEST
Holyfield: No question, unequivocally. Here’s a guy, you hit him with a left hook, he would keep his guard up, get close to you and turn his body. He was very smart in that aspect.

STRONGEST
Holyfield: Once again, as small as Evander was, he was probably the strongest.

BEST OVERALL
Holyfield: Unequivocally. Evander was smart, he was a thinker, he was in great shape, he had all the attributes to make him a great champion. That’s why he and I fought against each other so hard and so well.